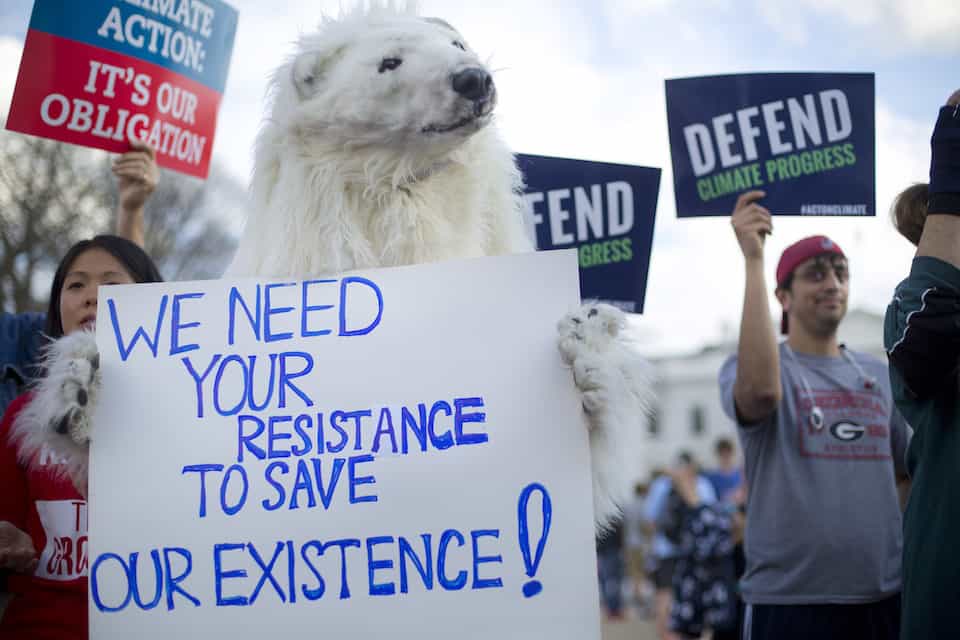 Donald Trump wants to let the world burn. Literally. But Democrats from Hawaii to Pittsburgh are fighting for a cleaner, safer future.

It is no surprise that Donald Trump’s war on women extends to Mother Earth. Despite efforts by everyone from Europe to Exxon, Trump turned his back on the world as the United States pulled out of the Paris Climate Accords.

But as we have learned, Democrats steadfastly refuse to give Trump the last word.

While other governors have pledged to uphold the Paris accord for their states, Hawaii’s Governor David Ige is leading the charge on the legislative front. This week, Ige signed legislation making Hawaii the first state to incorporate parts of the Paris Accords into official state law.

According to NPR, "The law commits the state to reducing greenhouse gas emissions in order to align with the principles and goals of the Paris Agreement."

Before signing the bill, Ige hammered home the truth that befuddles the likes of Mike Pence:

Tides are getting higher, biodiversity is shrinking, coral is bleaching, coastlines are eroding, weather is becoming more extreme. We must acknowledge these realities at home. That is why Hawai’i is united in its political leadership on tackling climate change.

He added, "Together, we can directly contribute to the global agenda of achieving a more resilient and sustainable island Earth."

We are, indeed, stronger together. And it's not just governors recognizing and acting on this.

Pittsburgh’s mayor, Bill Peduto, showed the world what resistance looks like when he was given an unexpected opportunity.

In his speech announcing the decision to pull out of Paris, and abdicating what little was left of his global credibility, Trump attempted to play cute with alliteration, saying that he was elected to "represent Pittsburgh, not Paris."

(Fact check: Pittsburgh voted for Hillary Clinton by an 80-20 margin.)

As with virtually everything this administration does, this phrase not only fell flat, but backfired.

Peduto immediately took to Twitter to embarrass Trump on his favorite platform, saying that Pittsburgh stands with Paris in their commitment to address climate change. But that was only the beginning.

Less than a week after Trump’s announcement, Peduto partnered with Anne Hidalgo, the mayor of Paris, to write a blistering New York Times op-ed that reaffirmed the commitment of both cities to a healthier planet while simultaneously sidelining Trump.

Though separated by an ocean and a language, we share a desire to do what is best for our citizens and our planet. That means putting aside parochial politics and embracing the global challenge of fighting climate change. In doing so, we can create a cleaner, healthier, more prosperous world for Parisians, Pittsburghers and everyone else on the planet.

In the absence of executive leadership in the United States, an unprecedented alliance is emerging among cities like ours to push progress forward.

Peduto knows that in an increasingly connected world, we need to build bridges with allies rather than pander to the fringe element of a political base.

Ige and Peduto are not alone. Elected officials across the country refuse to let a backwards-looking White House ruin the planet for our future.

Led by the governors of Washington, California, and New York, the United States Climate Alliance is a group of more than a dozen states and territories committed to upholding the Paris Accord.

More than 150 mayors, from New York City to Iowa City and from Denver to Dubuque, signed an agreement to work towards the goals of the Paris Accords.

Leaders like these governors and mayors are doing essential work, but they alone cannot make up for the self-inflected harms Trump is perpetrating on our international reputation. Those scars will take years, if not decades, to heal.

In the meantime, electing Democrats at all levels of government is the best way to ensure strong policies that will protect our land, our rivers, our air, and our oceans for generations to come.

Concrete actions to protect the environment are a crucial reminder for the resistance that when the Trump administration abdicates responsibility, Democrats are there to stand up and fight back.