Home National Steve Bannon claims he understands the teachings of Jesus better than the...
Progressive journalism is under attack. Please help us fight back!
DONATE 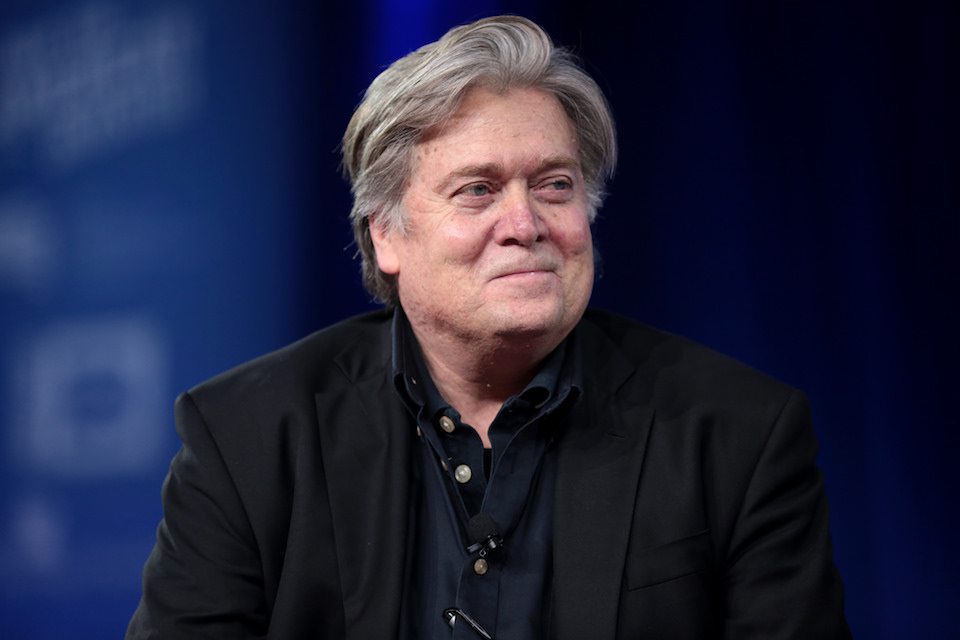 Flickr/Gage Skidmore
Get The American Independent in your inbox

In a new interview, Trump's white supremacist ex-adviser claims Catholic bishops do not understand their own doctrines, and only support the rights of young immigrants because "they need illegal aliens to fill the churches."

After Donald Trump's heartless, spiteful termination of President Barack Obama's DACA program, which could lead to the deportation of roughly 800,000 young, skilled immigrants who were brought to the United States as children, some of the most vocal opposition has come from Roman Catholic officials.

In a blistering statement, the U.S. Conference of Catholic Bishops called the rescission of DACA "reprehensible" and said it "does not reflect who we are as Americans." The statement added that the Church has "recognized and proclaimed the need to welcome young people," and that "regardless of your immigration status, you are children of God."

Bannon, who was himself raised Irish Catholic, attacked the pope and the U.S. bishops in a new interview on "60 Minutes" with Charlie Rose:

BANNON: The Catholic Church has been terrible about this.

BANNON: The bishops have been terrible about this. By the way, you know why? You know why? Because unable to really — to — to — to come to grips with the problems in the church, they need illegal aliens, they need illegal aliens to fill the churches. That's — it's obvious on the face of it. That's what — the entire Catholic bishops condemn him. ... They have — they have an economic interest. They have an economic interest in unlimited immigration, unlimited illegal immigration. And as much as—

ROSE: Boy, that's a tough thing to say about your church.

In short, Bannon is claiming he knows Catholic doctrine better than the Church, and that any bishop who supports immigrant rights has an ulterior financial motive.

Bannon's attack on the Catholic Church is not unusual. Republicans have attacked Catholic leadership for years — particularly under the tenure of Pope Francis, who said Trump is "not Christian," and whose exhortations on economic and social justice contradict much of the GOP agenda.

Trump supporters have called the pope an "evil fraud" and a "cuck" for speaking out in support of refugees. After he issued his encyclical on climate change, Rush Limbaugh proclaimed the pontiff a "Marxist," and Michael Savage accused him of "directing mankind to worship the Antichrist."

After Republicans spent years deriding liberal "cafeteria Catholics" for dissenting from the Church's views on homosexuality, abortion, and birth control, they are happy to claim they know better than the pope, the cardinals, and the bishops on immigration, war, poverty, the death penalty, universal health care, and the environment.

Bannon's new claim to moral superiority over Catholic leadership is simply par for the course — and further evidence of his party's abject intellectual and moral bankruptcy.