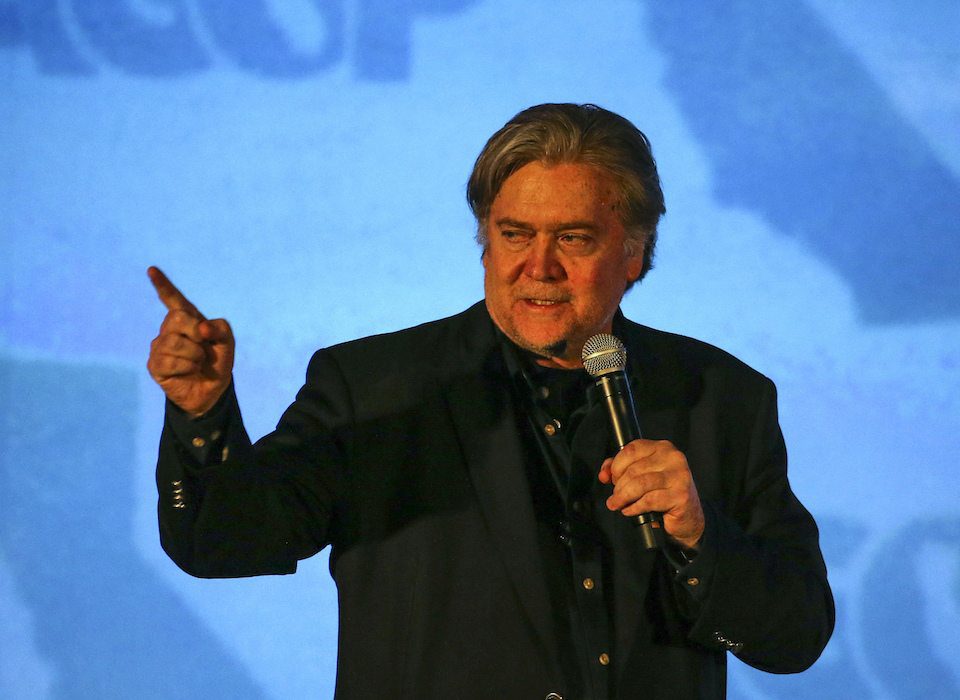 Republican gubernatorial nominee Ed Gillespie has abandoned all pretense of portraying himself as a mainstream middle-of-the-road conservative in the closing days of the Virginia election.

His unapologetic embrace of full-throated racism earned him the endorsement of Donald Trump last month, and now his anti-immigrant, pro-Confederacy campaign has received praise from avowed white supremacist Steve Bannon.

Bannon had been quietly working with Gillespie for a while, helping him to hone a more overtly racist message in order to win the approval of Virginia's more infamous white nationalists, including Corey Stewart, the Confederacy fetishist (from Minnesota) Gillespie narrowly beat in the Republican primary.

Over the weekend, however, at a virulently anti-immigrant event, Bannon praised Gillespie for adopting Stewart's "underlying message" and "embracing Trump's agenda," predicting Gillespie would win Tuesday's election because of it.

"If he wins," Bannon said, "and I do believe that he’s going to win, he’s going to pull this thing out — it’s because of the underlying message of Corey Stewart and what he believes in and the Trump voters in Virginia that are going to turn out."

The next day, Bannon went further, attributing Gillespie's slight rise in the polls to his use of "Trump-Stewart talking points."

Those talking points include Gillespie's horrific ad conflating Latino immigrants with criminal gang members and vowing to preserve monuments of traitors who waged war against the United States to preserve slavery.

Gillespie is a corporate lobbyist who quietly advocated for his clients even when he served in George W. Bush's White House. Gillespie used to hold himself out as a more mainstream conservative, warning the party against the kind of radical nationalist positions Bannon, Trump, and Stewart all support.

But Virginia has not elected a Republican to statewide office since 2009, and Gillespie has consistently been behind in most polling. So in a clearly orchestrated move to appeal to the far-right Trump supporters, Gillespie dropped his pledge to be a "governor for all Virginians," instead relying on racist dog whistles to demean minority voters and even referring to Northern Virginia, populated by more moderate and liberal residents, as "enemy territory."

Most polling on the day before the election still shows Gillespie behind his Democratic opponent, Lt. Gov. Ralph Northam. But if he does somehow manage to squeeze out a victory on Tuesday, it will be because he turned to the ugliest and most divisive leaders of the Republican Party to help him — and disgraced himself and Virginia in the process.