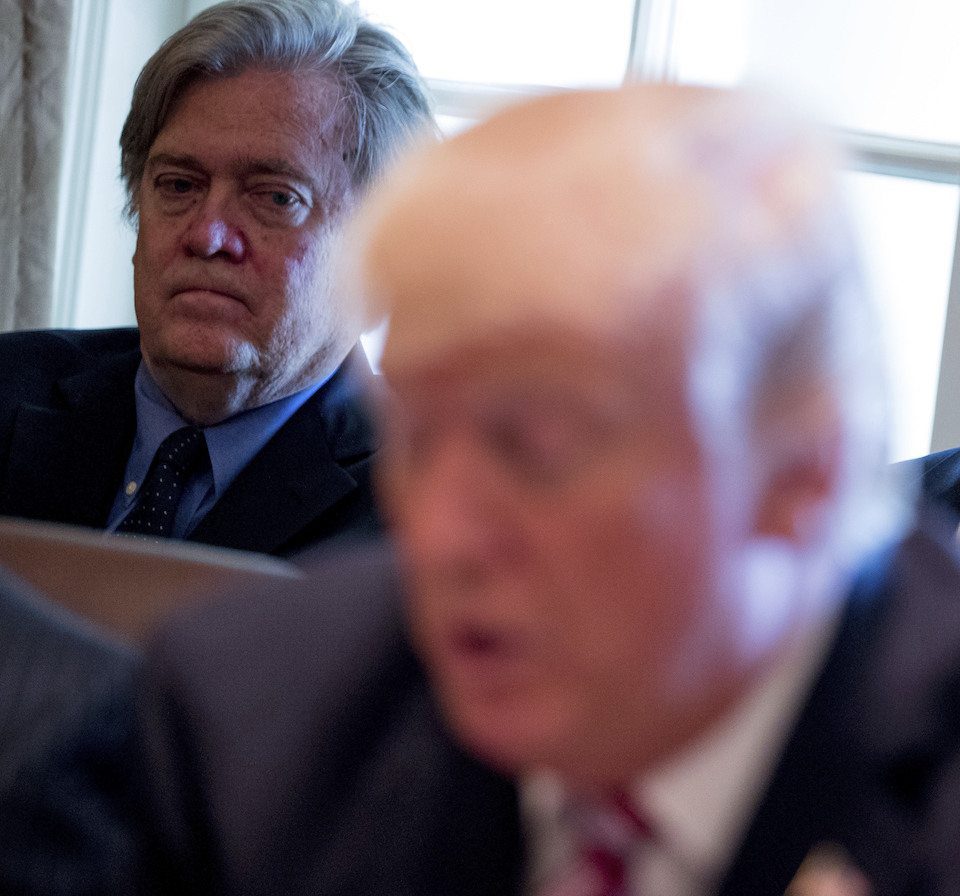 Demolishing the White House's choreographed spin that the Russia investigation into Donald Trump's 2016 campaign is a hoax and that special counsel Robert Mueller is engaged in some sort of rogue witch hunt, Trump's former chief strategist Steve Bannon clobbers the Oval Office team in a new book due out next week.

Specifically, Bannon throws the entire Trump team under the bus over the stunning meeting it had at Trump Tower during 2016 with Russian operatives who explicitly offered to deliver incriminating information about Hillary Clinton. The confab was "treasonous" and "unpatriotic," according to Bannon, echoing the claims of Trump's fiercest Democratic critics.

Trump's son Donald Jr. and his son-in-law, Jared Kushner, were among those who attended the collusion meeting, which they later, and preposterously, claimed had been about addressing the issue of Russian adoptions in the U.S.

“The three senior guys in the campaign thought it was a good idea to meet with a foreign government inside Trump Tower in the conference room on the 25th floor – with no lawyers," said Bannon. "Even if you thought that this was not treasonous, or unpatriotic, or bad shit, and I happen to think it’s all of that, you should have called the FBI immediately."

The quotes appear in the soon-to-be-released book "Fire and Fury: Inside the Trump White House," by Michael Wolff, according to the Guardian.

To date, Mueller has indicted members of Trump’s inner circle, including his former campaign manager Pual Manafort and former national security adviser Michael Flynn, who pleaded guilty to lying to the FBI about his communications with Russia.

Bannon tells Wolff that both Trump's son and son-in-law both face major legal peril. “They’re going to crack Don Junior like an egg on national TV," he said.

“This is all about money laundering," Bannon added. "Mueller chose [senior prosecutor Andrew] Weissmann first and he is a money-laundering guy. Their path to fucking Trump goes right through Paul Manafort, Don Jr and Jared Kushner … It’s as plain as a hair on your face."

Last month, it was reported that federal prosecutors had subpoenaed records from Deutsche Bank, the German bank that has loaned hundreds of millions of dollars to the Kushner family property empire.

Since leaving the White House last summer, Bannon has at times tried to separate himself from Trump in hopes of cultivating his own white nationalist political niche. That attempt failed miserably in Alabama, where Bannon loudly touted Roy Moore as the future of the so-called populist movement within the GOP.

But when Moore was accused of child molestation, Bannon's handpicked "populist" ambassador managed to lose to a Democrat in one of the reddest states in the country.

Now, as the Russia probe intensifies in 2018, not only isn't Bannon going to provide the Trump team with any cover, he's calling out their previous "treasonous" behavior.