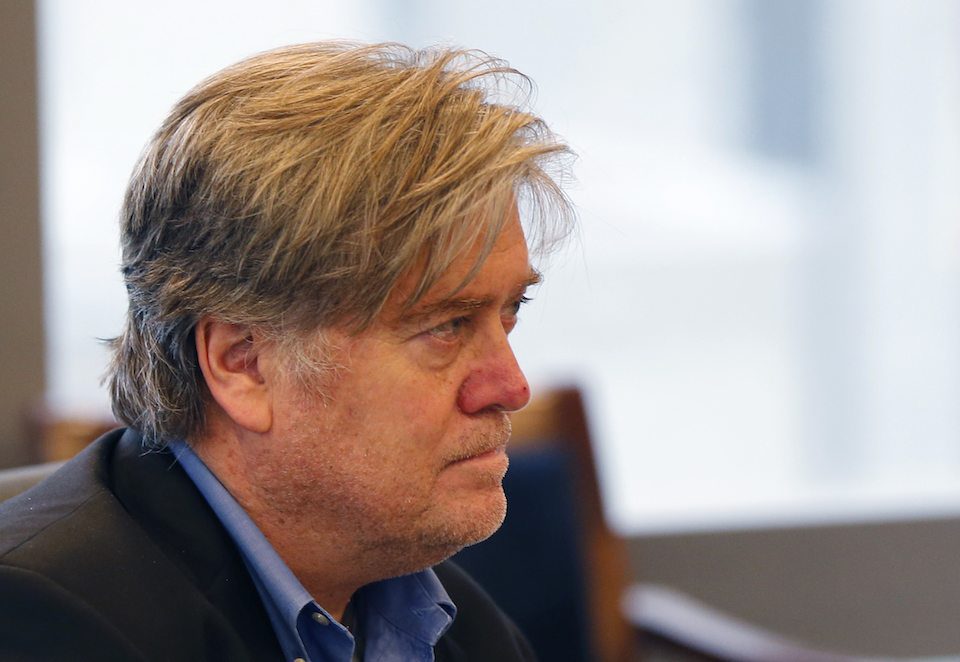 The Florida 'party house' previously occupied by Steve Bannon had quite a reputation.

When award-winning underwater cinematographer Lawrence Curtis moved into the lush Coconut Grove neighborhood of Miami, he had no idea the house he was renting would become a national story.

But that’s because he didn’t know the prior tenant was Steve Bannon, adviser to Donald Trump’s presidential campaign and now the chief strategist in the White House.

In March 2017, the Washington Post published a profile on Bannon that included some shocking details, including the bizarre case of 1794 Opechee Drive, the house in Miami that Bannon claimed as his residence, along with his third ex-wife.

The Miami-Dade Police Department’s public corruption unit launched an investigation into whether Bannon had fraudulently registered to vote in that county. Bannon had signed the lease, listed himself as an occupant, and paid the rent every month.

One of Bannon’s colleagues, Arlene Delgado, testified that she had met with Bannon at the house on Opechee Drive, which he described as “my house,” where she saw “boxes, papers, and effects” that indicated he lived there. They met, according to Delgado, because Bannon had moved to Florida and wanted to increase the presence of the far-right Breitbart News, of which he was executive chair.

The meeting was corroborated by an email exchange between Bannon and Delgado.

Bannon’s ex-wife testified that he did indeed stay at the house with her, though she did not feel “comfortable” answering any further questions.

In the final report dismissing the investigation, law enforcement found “evidence that tends to indicate that [Bannon] did not intend to or actually did reside” in that county, but there was not sufficient evidence to prove beyond a reasonable doubt that Bannon had knowingly committed voter registration fraud.

The Washington Post focused primarily on the bizarre fact that Bannon listed the Opechee Drive house as his place of residence, despite living in California. The article lightly touched on the state of disrepair in which Bannon left the house — including a bathtub apparently destroyed by acid.

But the truth turns out to have been much worse than that.

When Curtis first saw the house, the real estate agent, Beatriz Portela, told him the previous tenants “were not very upstanding people” and had “severely damaged” the property.

They had “put padlocks on all the doors, installed video cameras, and had ruined the bathtub, kitchen counter, and floor.”

Worse, though, was that it had been a “party house,” she said, known for frequent drug use.

Carlos Herrera, who owned the house with with his wife, Andreina Morales, painted a picture of what initially seemed to be a normal tenancy but soon evolved into an almost daily parade of debauchery and drug use, including run-ins with the police.

“The conclusion is she was probably cooking meth in here,” Herrera said of Bannon's ex-wife. That would have explained the damage done to the bathtub and kitchen sink.

“Each person gave accounts that the house was used to film pornography, had a constant flow of men, women — and even children — at the house and that blatant drug use was occurring at all hours of the night and day,” Curtis said.

Felix, a handyman who frequently worked on the property, told Curtis he had personally “witnessed women and men being filmed in the act.” He described the buckets of chemicals and bags of trash and rags he had to remove. He spent hours scrubbing the master bathtub, “which appeared melted by some form of acid.” Felix suspected the bathtub had been used for “making drugs.”

“In fact,” Curtis said, “he did so in an almost gleeful and boastful manner.”

The pest control worker described witnessing drug use each time he came to the house, “even at early day hours.” He told Curtis it would blow his mind to know what “what went on in the house.”

An unnamed male tenant, he said, who was “a heavy set man,” offered him "girls for sex and/or drugs in lieu of payment," but he never accepted because he could lose his job.

When the oven range needed repair, the repairman refused to come to the house. Despite the service warranty, Curtis said, he was told no one would come “if the same people were living in the house because ‘that house is evil and the people are evil.’”

The company ultimately agreed to send someone after being assured the prior tenants were gone.

When Curtis opened the gate, the repairman said with seeming relief, “You aren’t him.”

He proceeded to work on the range and also share his own horror stories about the previous tenants.

He told Curtis that on several occasions, when he would arrive to service the house, “the tenants would scream at him to leave and threatened him with violence.” At other times, when he was allowed into the house to perform work, he observed topless and naked men and women and the constant presence of drugs, which they would sometimes offer to him.

He told Curtis it was “the worst experience of his life” and that he “did not want anything to do with those ‘evil people.’”

“You have no idea what kind of evil stuff went on in the house,” he said.

One day, Curtis said, a woman came to the house asking for “Steve or [his ex-wife].” She appeared distraught when he told her they no longer lived there. She stood outside the gate for several minutes in a daze.

“I assumed she was probably a regular visitor to the house looking for drugs from the previous tenants,” Curtis said, “but I didn’t realize just how bad the drug use in the house had been at the time. I firmly told her to leave and to not come back.”

Meanwhile, according to the realtor, the neighbors had formed a committee “in an effort to get the owners to evict” the tenants before they ultimately left.

In September 2016, upon returning from a filming in the South Pacific, Curtis came home to a pile of mail addressed to Steve Bannon and his ex-wife. Curtis would write “return to sender” on the mail, but “the flow of bills, notices from the city of Miami, and letters from the Bank of Ireland started piling up.”

That’s when the landlord finally told Curtis about the identity of the former tenants.

“He told me that [Bannon] was indeed the previous tenant who caused such drama,” Curtis said. And now that Bannon had joined Trump’s presidential campaign, everyone was looking into Bannon and his history.

“He told me the FBI had contacted them, as well as several reporters and journalists,” Curtis said, “and that I should expect to be contacted as well.”

“It was an unusual situation, to say the least,” he added.

But it was more than unusual. It was also a health hazard.

Shortly after Curtis moved into the house, he started to experience a variety of symptoms: fatigue, inability to sleep, eye and skin irritation, chronic chest pain, and dizziness.

The symptoms would subside when he was away from the house for weeks at a time and they would resume when he returned.

In March, Herrera finally admitted to Curtis that the prior tenants had manufactured meth there. That’s when Curtis went to stay in a hotel. Again, his symptoms subsided.

He also purchased kits to test for methamphetamine in the house. At first, he focused on the kitchen, master bathroom, and guest room. The tests showed a high level of contamination, so Curtis ordered six more tests and had them shipped overnight.

The contamination was through the roof. So Curtis hired a company to test the house at well. The test confirmed “levels of meth and very high levels of cocaine.”

In May, Curtis moved out of the house.

He still suffers from health problems related to living in the house once occupied by Steve Bannon.