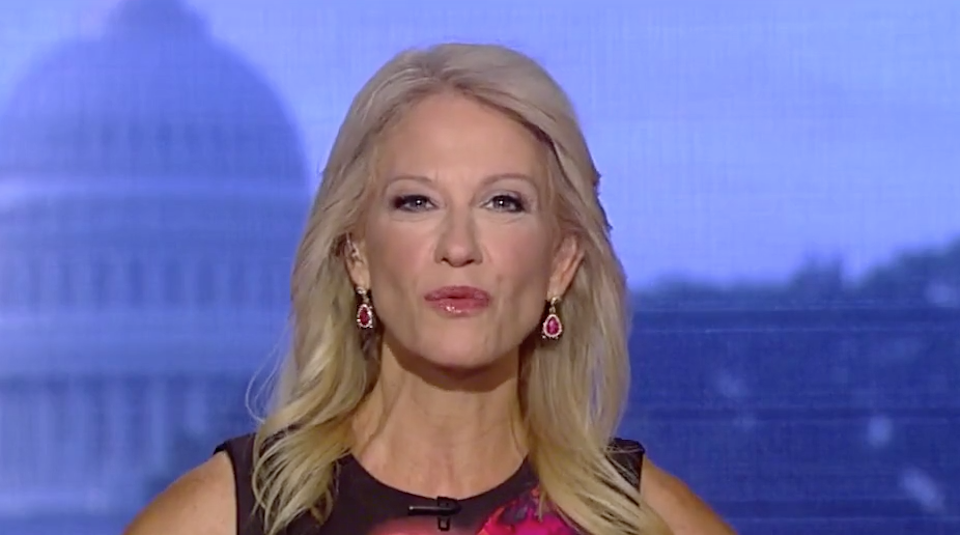 Kellyanne Conway grudgingly admits celebrities have the right to criticize Trump, but it really makes her angry when they do.

Counselor to the president Kellyanne Conway has spent months now complaining about the constitutional freedom enjoyed by the press and media personalities to go after Donald Trump.

On previous occasions, Conway has said that journalists should be fired if they "talk smack" about Trump, and that they should be "forced" to cover his posititive traits, like his "humility."

But the media is not the only target of Conway's wrath. She also apparently thinks that celebrities should keep their mouths shut about politics and about the reality TV star president.

In a Monday appearance on "Fox & Friends," Conway laid into the Emmys for being "politicized," saying of the celebrity honorees that Americans "want you to stick to your knitting":

CONWAY: They all got plucked and polished and waxed, and some of them didn't eat for two months, and all for what? To sound the same? They have a right to speak. But if you are tuning in to watch — if you are America, and you are tuning in to watch your favorite actors and actresses and shows — and I used to do it routinely as a kid, oh, who is going to win and oh, she lost, I love her show — there is very little of that.

It's — between the Emmys, the Miss America pageant was very politicized. Our sports are very politicized. And it looks like the ratings are suffering. It looks like America is responding by tuning out, because they want you to stick to your knitting. They want you to, I guess, in this case, read the stuff other people write for you. And so they are welcome to their opinion, but how does it really fit?

Although Conway may resent the causes celebrities are endorsing, it is nothing new for Hollywood to be involved in politics. Many celebrities have used their fame and wealth to make a positive difference in everything from world hunger to human trafficking.

Trump himself came to office without having any political experience, but plenty of experience on TV and a few cameo appearances in movies. He has for years expressed bitterness — including during a presidential debate in 2016 — that he never won an Emmy for his show. Certainly Conway never told him to stick to his knitting.

Conway did not stop there, though. She went on to reiterate that while celebrities have a "right to speak freely," they should take more care not to "alienate" Trump supporters.

People have the right to speak freely, that's very obvious. We live in the greatest democracy in the world that allows that ... But again, to what end? In other words, you're alienating at least 63 million Americans who supported this president last time. But you're alienating many more who want the president to succeed, and you're showing the world that you're so easy with an insult about our leader — I think that's really unfortunate, actually.

Only minutes before, Conway herself was quick with insults about celebrities who attended the Emmys. More importantly, the chutzpah of Conway to blame Hollywood for politically "alienating" people the day after her boss retweeted a GIF of himself braining Hillary Clinton with a golf ball is incredible. Conway apparently believes it is the sole responsibility of Trump's critics to unify the nation as Trump demonizes anyone and everyone he pleases.

It is increasingly clear that what Conway resents is free expression itself. Her exhortations to censor opposition to Trump are craven and un-American, and as the resistance marches on, she will continue to be disappointed.