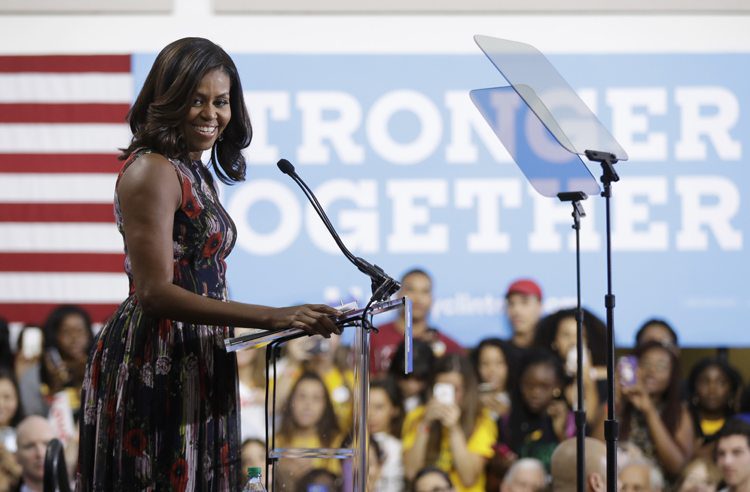 There’s a lot of Trump fatigue going around. But this week ended on an uplifting note, as First Lady Michelle Obama hit the campaign trail for Hillary Clinton in Fairfax, Virginia, and delivered a stirring speech reminding us that we are in the home stretch of an election with only one inspiring candidate.

Michelle Obama's giving a barn burner of a speech for Hillary Clinton. Says only Clinton, not Trump, has any idea how to be president.

“When I hear folks say they don’t feel inspired in this election, let me tell you, I disagree,” said the First Lady.

Michelle Obama: America can elect "one of the most qualified people who has ever endeavored to become president" https://t.co/RXIQtfd3z6

Her reiteration of Clinton’s dogged determination to wade through decades of slander and refusing to stand still, despite being burdened with the “concrete shoes” forced upon her from a patriarchal society, spoke to me as a woman of color who has faced barriers because of my skin color, age, and gender.

The First Lady spoke to Clinton's tenacity, her ability to get right back up and come back stronger when she gets knocked down, and urged voters to look past the negativity and the noise of the campaign to find the candidate she calls a friend.

Michelle Obama is the best friend @HillaryClinton could have right now. That speech was exactly what they needed.

“As you prepare to make this decision, I urge you, I beg of you to ignore the chatter and the noise and ask yourselves, which candidate has the experience, the maturity, and the demeanor to handle the job I just described to you? Which candidate’ words and actions speak to the future of what we want for our country? And the values we share, values like inclusion?” she asked.

Has anyone spoken w/ as much passion about Trump's qualifications, dedication, & decency as @FLOTUS just spoke about @HillaryClinton? (No.)

For many millennials like myself, when the First Lady talked about how voters under the age of 30 provided the margin of victory for President Obama in four battleground states in 2012, it was a wake-up call. It is clearer than ever: voting is not a luxury in this election, it is a necessity.

“We can’t afford to be tired, or turned off. Not now. While this might feel like a time of uncertainty and division, I have never felt more hopeful about the future of this great nation,” she continued, ending the week on a positive note.

The opposition continues to go low, and our First Lady went high.