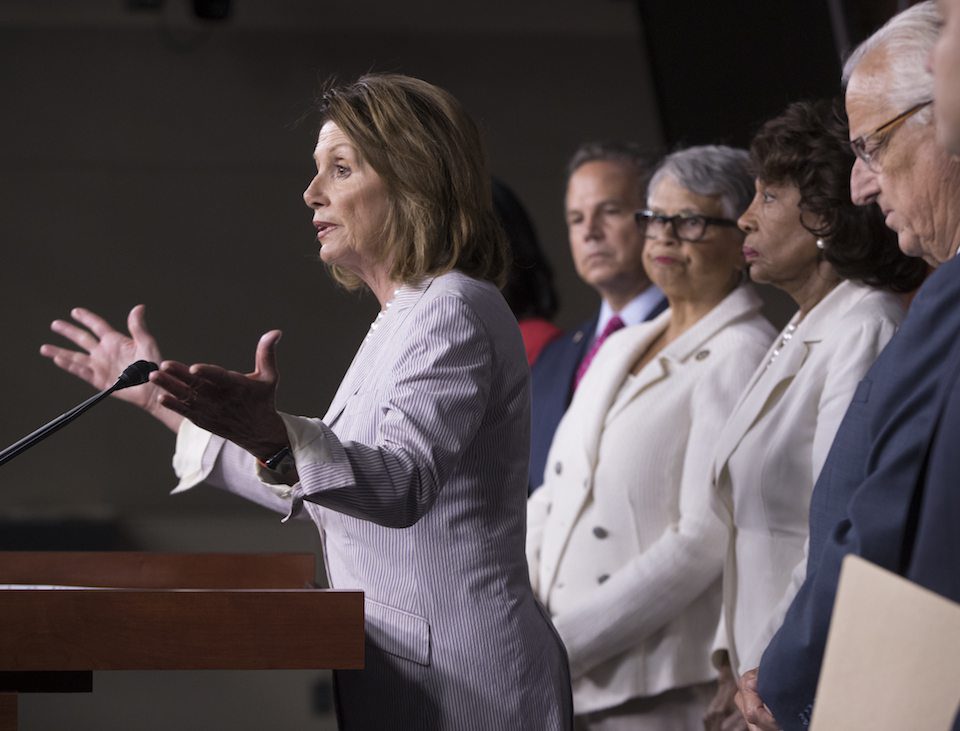 House Democrats launched a new offensive to force Republicans to vote on keeping the Trump administration accountable — especially during ongoing investigations into collusion between Trump and Russia.

House Democrats unveiled a new plan to force Republicans to stop covering up for the Trump administration.

Led by House Minority Leader Nancy Pelosi, Democrats will push for votes that would finally give the public access to information about Donald Trump's personal dealings, as well as those of his family members working in the White House, like his daughter Ivanka and son-in-law, Jared Kushner.

Pelosi criticized Speaker Paul Ryan and the Republican leadership for their refusal to use their majority power to provide oversight of Trump.

"They have become enablers," she said during a Friday press conference. Pointing out that Trump "fawns over Putin" while trying to loosen sanctions imposed against Russia for interfering in the election, Pelosi wondered "what do the Russians have" on Trump.

She called on Ryan to allow a vote on an independent commission to investigate Russia's actions, a measure that Republicans have refused to support up until now. Pelosi also said that Kushner's security clearance should be revoked, and that Congress should endorse such an action.

On Thursday, two amendments to do exactly that were blocked by Republicans on the House Appropriations Committee.

PELOSI: Speaker Ryan has avoided any response by the Republicans, any positive action to uphold the Constitution of the United States in terms of our electoral system, our democracy. Earlier this week I called for him to give us a vote on an independent commission, outside, independent commission to investigate the ties to Russia. What do the Russians have — politically, financially, or personally — on Donald Trump that he fawns over Putin, questions sanctions, is reckless when it comes to Article V of NATO, the list goes on and on.

The American people have a right to know, maybe they'll clear the air, maybe it will be exculpatory, maybe it won't.

But we know one thing for sure, we have a responsibility and our oath of office to make sure that Russia does not meddle in our elections again. And that would be the purpose of such an investigation.

I also call for the revoking of the security clearance for Jared Kushner. It's absolutely ridiculous that he should have that clearance. It's not justified in any way. The president could revoke it in a moment and he should. But Congress — Republicans in Congress should stop hiding from the truth and stop hiding the truth from the American people.

The Democrats will make multiple "resolutions of inquiry," a rarely used legislative tactic in which members of Congress request information from the executive branch, and if the committee does not act on the resolution, a vote on the floor of the House can be called for.

While Ryan currently has the power to keep such potentially embarrassing votes from occurring, the resolutions would circumvent his authority.

Earlier this year, Republicans voted against requesting Trump's tax returns after a vote was forced by a resolution of inquiry.

In a release, Pelosi explained, "More than 300 requests for information from Democratic Members on these topics and other issues critical to the lives of the American people have gone unanswered by the Trump Administration."

Referring to the "Trump family criminal enterprise," Rep. Maxine Waters (D-CA) said she and her fellow Democrats were attempting to uncover "the unconstitutional activity of this president and his family."

Waters, the ranking Democrat on the House financial services committee, is pushing to uncover a Deutsche Bank report that reportedly explored ties between Trump's account there and Russian funds.

WATERS: Thank you, Leader Pelosi, for organizing all of us today who have taken some action dealing with the Trump family criminal enterprise. Whether we have written letters, or introduced legislation, so many of us are attempting in every way that we possibly can to unveil the criminal activity, the unconstitutional activity, of this president and his family.

Texas Rep. Joaquin Castro, a member of the foreign affairs committee, said he would push a resolution to uncover the details of the Trump administration's push to weaken sanctions against Russia. Castro pointed out that the sanctions legislation passed in the Senate 98-2, and that after similar legislation was introduced in the House, only Trump and Ryan were keeping it from becoming law. He noted, "House Republicans shouldn't be providing cover for the administration and its affection for Russia."

Accusing Attorney General Jeff Sessions of engaging in "duck and cover," Washington Rep. Pramila Jayapal, who serves on the judiciary committee, cited the recent release of documents showing that he omitted his interactions with the Russian government on his security clearance form. She is pushing for Republicans to look into the systematic coverup of Russia connections by Trump officials like Sessions.

Instead of breaking with the leader of their party and providing necessary oversight, as the Constitution demands, Republicans have joined themselves at the hip to Donald Trump. The ongoing exposure of his behavior has already irrevocably tainted his presidency, and as long as Republicans work as his co-conspirators in the coverup, they are just as guilty as Tump, his inner circle, and his family.