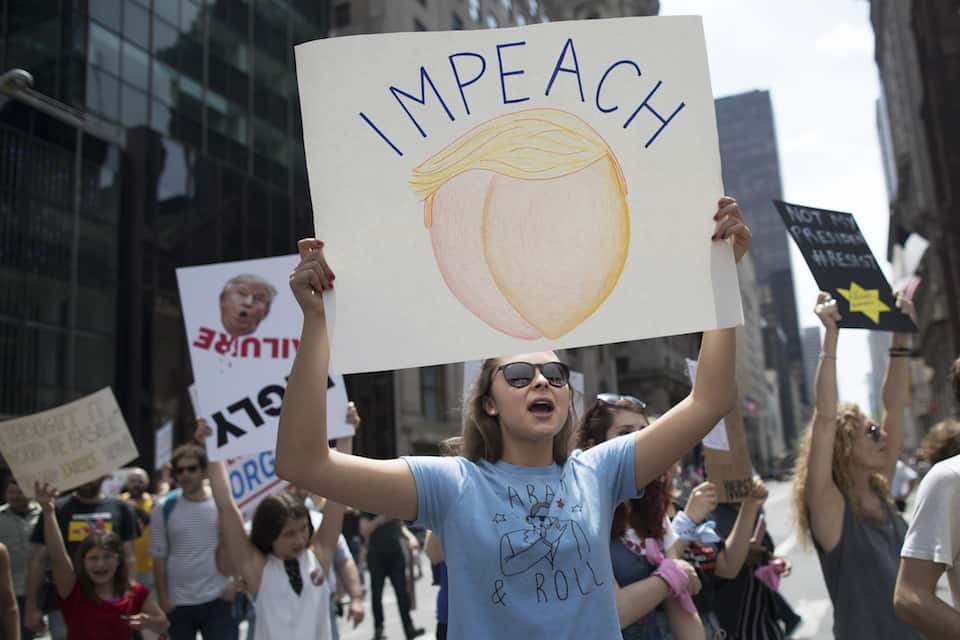 Donald Trump's firing of FBI Director James Comey and the subsequent cover-up has voters increasingly supporting his impeachment. Trump also faces brutally low ratings for how he has handled his job.

Nearly half of Americans already think it is time for Donald Trump to be removed from office.

That's according to Public Policy Polling's (PPP) most recent survey, which found that 48 percent of respondents support impeaching Trump, compared to 41 percent who are opposed.

This is the first time, since PPP started asking the question, that more people support impeaching Trump than oppose it. That harsh change comes in the wake of Trump's surprise firing of FBI Director James Comey during the agency's investigation of Trump and Russia.

Another harsh number: Only 40 percent of people approve of the job Trump is doing in the presidency.

When he was sworn in, Trump faced polling lower than Richard Nixon's at the height of Watergate, and his cover-up of the Comey firing and associated behavior has increased the sentiment.

"Voters think that James Comey’s firing was all about Russia," said PPP President Dean Debnam in a statement, "and they want an independent investigation to get to the bottom of whether Trump’s campaign was working directly with Russia to influence the election last year or not."

Only 37 percent support Trump's decision to fire Comey, and 54 percent say he was fired because Trump does not like the Russia investigation. This assessment is not based on some great love of Comey; only 24 percent of respondents have a favorable view of him.

Even more brutal for Trump is the 54 percent who believe he should resign if an investigation determines his campaign coordinated with Russia.

The other findings in the poll are also quite negative for Trump and his fellow Republicans. Democrats have a 49-38 lead on the generic congressional ballot. That is likely connected to the horrific showing for the American Health Care Act, which a mere 25 percent of voters support. Only 49 percent of Republicans even support it.

Trump has been on a downward slide since he was sworn in, and his behavior has destroyed any chance of a "honeymoon" period in the presidency. He is not far away from America demanding he be removed from office, and he has given multiple reasons to justify those feelings.