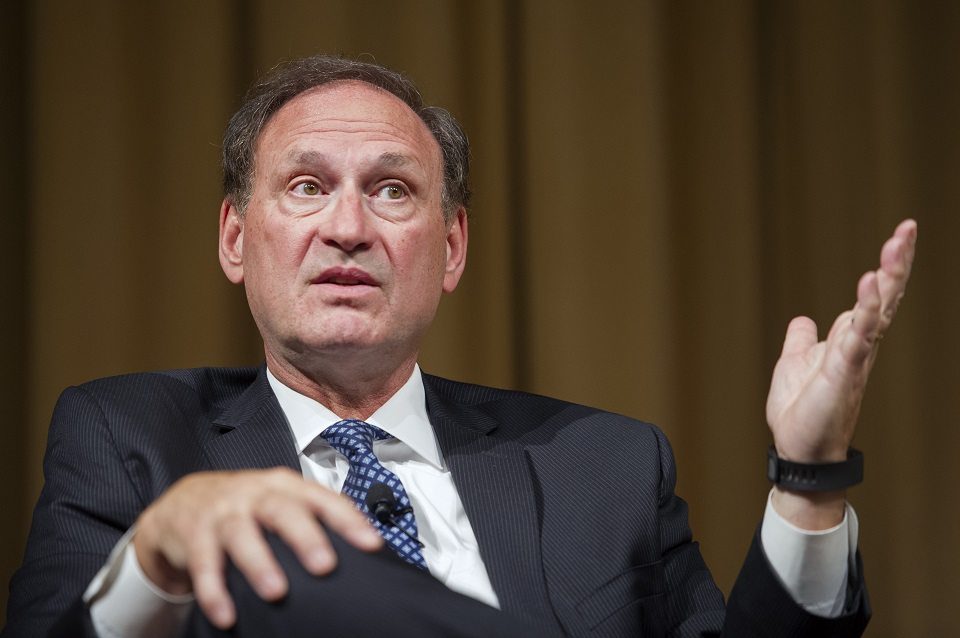 The sitting Supreme Court justice spoke at a convention of the partisan right-wing Federalist Society.

Justice Samuel Alito on Thursday night bemoaned the public disapproval of homophobia in a keynote speech for a convention of the Federalist Society, a powerful and influential right-wing organization of conservative lawyers.

It was an unprecedented violation of the Code of Conduct for United States Judges, which states that "a judge should not participate in extrajudicial activities that detract from the dignity of the judge’s office, interfere with the performance of the judge’s official duties, reflect adversely on the judge’s impartiality, lead to frequent disqualification, or violate the limitations set forth [in the Code]."

"You can't say that marriage is a union between one man and one woman. Until very recently, that's what the vast majority of Americans thought. Now it's considered bigotry. That this would happen after our decision in Obergefell should not have come as a surprise," Alito said.

Alito said he and the other justices who dissented "could see where it would lead."

"I wrote the following: I assume that those who cling to old beliefs will be able to whisper their thoughts in the recesses of their homes but if they repeat those views in public, they will risk being labeled as bigots, and treated as such by governments, employers, and schools. That is just what is coming to pass. One of the great challenges for the Supreme Court going forward will be to protect freedom of speech."

He added: "Although that freedom is falling out of favor in some circles, we need to do whatever we can to prevent it from becoming a second-tier constitutional right."

In his speech, Alito claimed there was "no evidence that anybody has been harmed" by the decisions in cases like Masterpiece Cakeshop. He said there's "no reason to think that Jack Phillips' stand would deprive any same-sex couple of a wedding cake" because the couple received a free cake from another bakery and "celebrity chefs have jumped to the couple's defense."

Fatima Goss-Graves, president of the National Women's Law Project, which advocates for gender justice in public policy and the courts, tweeted that Alito's speech was "alarmingly political. ... I don't know how the public can think we can get a fair shake before this Court on critical questions that will continue to come before the Court."

Chris Geidner, director of strategy at the Justice Collaborative, said: "This was a hyper-political, partisan speech, and his message in sum was: 'I'm free to say this now. We have the votes.'"

Ellis notoriously deliberately misgendered the Pennsylvania secretary of health, Dr. Rachel Levine, who is a transgender woman. She refused to apologize.

Alito also lied about Plan B, the morning after pill, calling it an abortifacient, and complained about restrictions meant to keep people safe during the pandemic.

Steven Mazie, who covers the Supreme Court for the Economist, tweeted that Alito discussed a case concerning Plan B that the Supreme Court might take up in the future. "This is incompatible with the judicial oath," Mazie said.