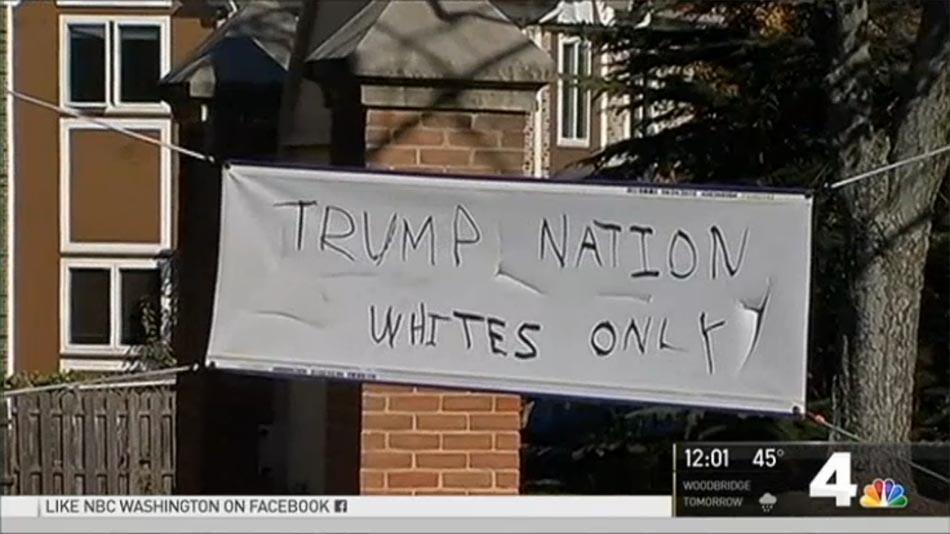 NBC 4 Washington
Get The American Independent in your inbox

We have been hearing a lot about the "peaceful transition" of power from one president to the next. But with hundreds of hate crimes being reported across the nation, the question is: Peaceful for whom?

Beginning in the weeks before the election, when Donald Trump began asserting the election was "rigged" — a claim he abandoned once he won the Electoral College — there was emphasis on how our democracy survives via peaceful transitions of power from one administration to the next.

But the Southern Poverty Law Center, which tracks hate groups and hate crimes, told NBC News that over "300 incidents of harassment or intimidation have been reported following Trump's election Tuesday night," dozens of which NBC has independently verified.

Among them are racist, anti-Semitic, Islamophobic, homophobic, transphobic, and misogynist attacks. Many of them have been explicitly connected by the perpetrators to the election of Trump.

On the Senate floor, Harry Reid observed: "Not only did that man who lost the popular vote win the election, but his election sparked a rise in hate crimes, threats of violence."

The transition has not been peaceful for the marginalized people targeted by these attacks.

Trump has now elevated white nationalist Steve Bannon to a key role in his administration, and the powers that be are working overtime to normalize this dangerous empowerment of hatred. Meanwhile, hundreds of hate crimes have been committed in the first week following the election.