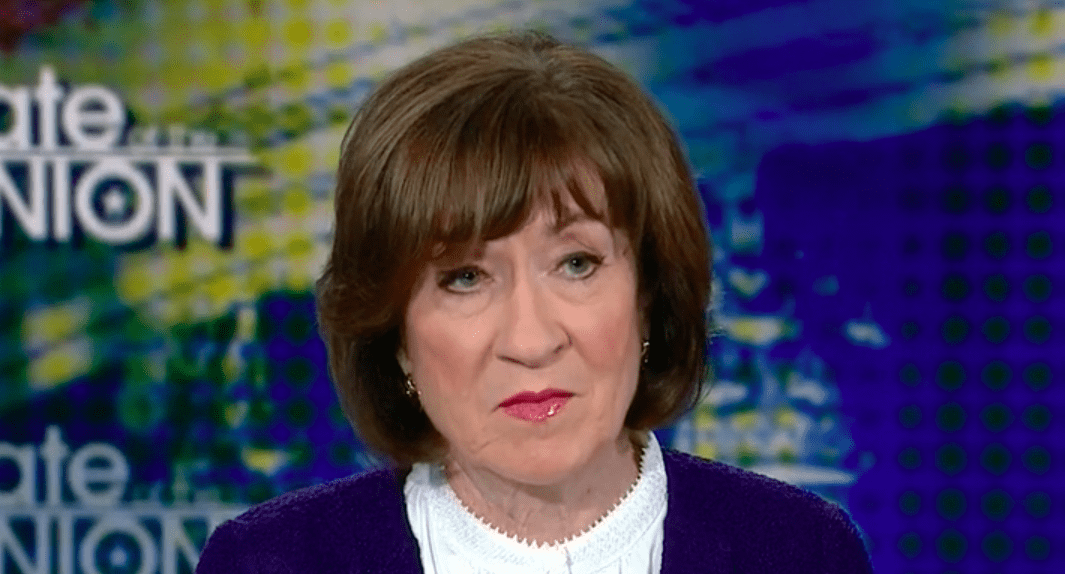 If gaslighting were an Olympic sport, Collins would be going for the gold.

Sen. Susan Collins (R-ME), who pretends to support women's rights, spent weeks pretending to be undecided about confirming Brett Kavanaugh — an alleged sexual predator and an anti-choice ideologue — to the Supreme Court.

Collins proved that her hand-wringing over Kavanaugh was a sham when she gave an extremely long, extremely partisan speech Friday explaining her decision to cast a key swing vote to confirm Kavanaugh, despite multiple credible allegations of sexual assault against him.

In that speech, Collins proved her support for women's rights to be a sham when she condescendingly claimed to believe Dr. Christine Blasey Ford's story about being assaulted in high school — except for the most important part of Ford's story, her "100 percent" certainty that her assailant was Kavanaugh.

And Collins doubled down on her disgusting victim-blaming in a Sunday interview on CNN's "State of the Union," stating flat-out: "I do not believe that Brett Kavanaugh was [Ford's] assailant."

Host Dana Bash didn't let Collins off the hook for the obvious inconsistencies in her Friday speech.

"As you remember, Ford was really clear — under oath, under pain of perjury — that she was 100 percent certain that it was Brett Kavanaugh who sexually assaulted her," Bash reminded Collins.

"Given the decision you made, do you not believe her?"

"I found Dr. Ford's testimony to be heart-wrenching, painful, compelling," Collins said. "And I believe that she believes what she testified to."

Translation: Susan Collins does not actually believe Christine Blasey Ford. If gaslighting were an Olympic sport, Collins would be going for the gold.

Collins went on to repeat a lie that she and other Republicans tell repeatedly about Ford: that there is "no corroborating evidence" for her allegations.

There are only two options here, as legal analyst Imani Gandy pointed out at Rewire News: Either Collins and Republicans don't understand what "corroborating evidence" means, or they're lying to their supporters about it. While Ford, understandably, hasn't managed to find anyone who remembers a party 36 years ago that would have been unmemorable to everyone but her, Ford actually has plenty of corroboration for her story.

"Do you still think it is possible that he did it?" Bash pressed. "You just don't have the proof to back that up?"

It's not clear why Collins believes Ford is somehow mistaken about the identity of her assailant — a young man she knew socially, at a very small gathering of a handful of people.

For Collins' argument to be true, Ford would have to be truly delusional in order to be sure enough about Kavanaugh's identity that she was willing to upend her life to testify about it under oath on national TV.

And that means Collins is engaging in some breathtaking misogyny. For centuries, women have been baselessly smeared as delusional, crazy, or "hysterical," in order to discredit their stories and their pain.

Once again, however, Bash didn't let Collins get away with it.

And Collins picked "he."