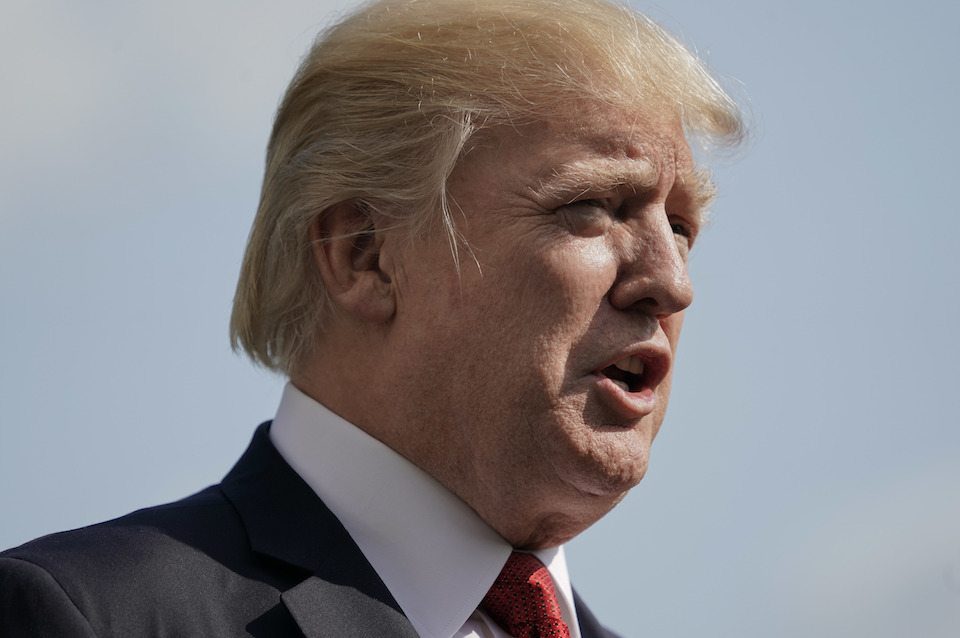 Donald Trump offered effusive praise for the Coast Guard's response to Hurricane Irma, and specifically for their image, after he made a failed attempt to severely gut the agency's funding.

Discussing the response to Hurricane Irma as it made landfall in Florida, Donald Trump effusively praised the response of the U.S. Coast Guard — and specifically, in very Trumpian fashion, their "branding."

But he has also tried to force major cuts to the service's budget that would have severely impacted its ability to respond to natural disasters and secure the seas.

Talking to reporters and patting his administration's response to the storm on the back in the process, Trump said, "The Coast Guard has been amazing already. You've been hearing what they're doing right in the middle of the storm."

He added, "A group that really deserves tremendous credit is the United States Coast Guard. What they've done — I mean, they've gone right into that, and you never know. When you go in there, you don't know if you're going to come out."

"They are really — if you talk about branding, no brand has improved more than the United States Coast Guard," Trump babbled.

Pres. Trump says he will visit Florida "soon," will keep an eye on how Hurricane Irma develops over the next few hours. pic.twitter.com/itaTVJYuDH

Yet when Trump submitted his conservative budget to Congress, he proposed a 14 percent cut to the Coast Guard.

The hypocrisy didn't escape the notice of the head of the Coast Guard, Admiral Paul F. Zukunft.

"We have always prided ourselves as a service that punches above our weight class," Zukunft remarked. "Yet, as our nation’s fifth armed service, we are budgeted at the bottom."

Backlash was so severe that Trump dropped the request, but is now ready to bask in the glow of Coast Guard operations in Florida during the storm.

He also noted that "FEMA has been incredible," just days after his Republican allies in Congress tried to cut FEMA funds to fund Trump's useless, racist southern border wall.

The credit-taking remarks came along with some strangely phrased commentary on the storm, as Trump continues to discuss the major weather events in an odd tone.

He described the historic storm as "some big monster," and offered a troublingly simplistic message for those in the storm's path.

Of course, the "bad path" would have been much worse for Americans trying to survive storms and other disasters in the future if Trump and his fellow Republicans had their plans for the Coast Guard and FEMA enacted.

But Trump is too busy praising "branding," urging sped-up tax cuts for rich people, and ignoring victims to think too deeply on such a matter.