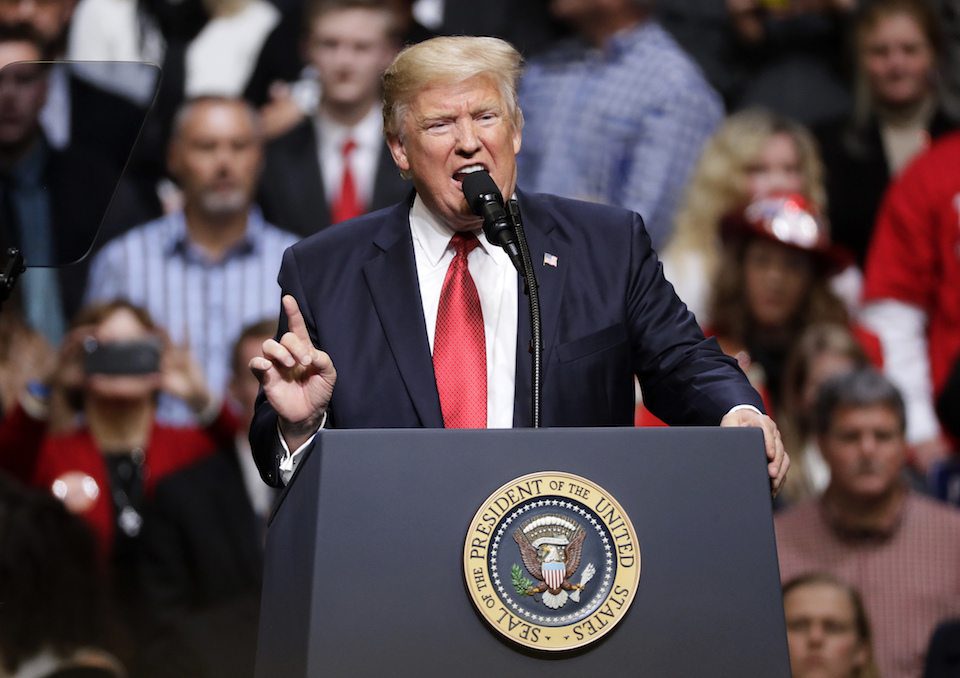 With their tax scam predictably failing, Trump and his fellow Republicans are focused on bashing immigrants in a misguided attempt to close the Democratic enthusiasm advantage.

Republicans, led by Trump, are abandoning their efforts to talk about the failing tax scam, and instead focusing their rhetoric on attacking and denigrating immigrants.

Republicans are on the wrong side of the enthusiasm gap, and desperate to excite their base. With the tax scam punishing the middle class while rewarding Wall Street executives, Republicans are turning to the same, tired playbook of fear-mongering racism aimed primarily at immigrants.

Republicans in Congress made grand boasts during the rushed efforts to pass their tax scam. One of the most popular was some version of what Rep. Mimi Walters (R-CA) said: that the bill would "allow hard-working Americans to keep more of their paychecks."

Since the bill went into effect, three national surveys have come to the same conclusion: The majority of Americans aren't seeing bigger paychecks.

In March, CNBC noted workers "should be well enough into the year" to notice a change. "But that’s not the case."

Workers are left behind, while Wall Street is showered with cash. "American companies have lavished Wall Street with $171 billion of stock buyback announcements so far this year," according to analysis by research firm Birinyi Associates. Workers are ignored, but "that money is enriching hedge funds, other Wall Street investors" and top executives, says Axios.

While Republican donors on Wall Street are seeing billion-dollar kickbacks, House Speaker Paul Ryan spends his time bragging about a secretary receiving an additional $1.50 per week. Six quarters is technically change, but nowhere near what the GOP promised.

The dynamic should not come as a shock.

"Democratic lawmakers who have been critical of the GOP bill have claimed it would be used for such things as share buybacks to enrich shareholders, rather than for capital expenditures or improving worker pay," CNBC correctly noted.

The tax bill was supposed to be the GOP's main legislative accomplishment to carry them to victory in the 2018 midterms. At the time the bill was signed into law, there was general Republican euphoria.

"I don't think I’m going to have to travel too much to sell it," Trump said. "I think it's selling itself."

But in reality, the tax scam is a lot like a Trump business: lots of flashy noise, but ultimately doomed to failure.

In two of the most scrutinized bellwether elections, Republicans saw their economic message crash and burn in spectacular fashion.

In the 2017 Virginia gubernatorial election, establishment candidate Ed Gillespie initially "emphasized a large, across-the-board tax cut." But after a narrow primary victory against a far-right tea party activist, he abandoned efforts to center his campaign on economics.

The Washington Post bluntly said Gillespie's campaign was not "just a dog whistle to the intolerant, racially resentful parts of the Republican base" but "a mating call." He flooded the airwaves with fear-mongering ads "embracing President Trump’s inflammatory political tone and tenor with an advertising campaign that equated illegal immigrants with gang violence."

Even after neo-Nazis led their hate-filled rally in Charlottesville, which resulted in the death of counter-protestor Heather Heyer, Gillespie sought to solidify the "GOP base while at the same time courting white nationalists already energized by Mr. Trump’s race-baiting."

Gillespie lost by nine points in a race that was supposed to be a nail-biter.

A similar narrative played out in the Pennsylvania's 18th Congressional District, where Democrat Conor Lamb sought an unlikely win deep in Trump country. Republicans blasted the airwaves with commercials touting their tax scam, confident the message would be successful in a district Trump won by 20 percent.

But soon, they realized voters weren't as enthusiastic as Koch-funded lobbyists who showered Congress with campaign donations to help pass the bill. Turns out a tax bill aimed to give benefits to the top 1 percent didn't play well in suburban and rural Pennsylvania.

In a matter of weeks, ads from the GOP mentioning taxes dropped from 66 percent to a mere 14 percent.

"GOP groups that once proudly declared the tax law would be the central fight of the midterms are now airing ads on so-called sanctuary cities," noted Politico as Election Day neared.

In a race where Trump twice campaigned for the Republican candidate, it was no surprise the GOP turned to dog-whistle ads about immigration, similar to the ones used in Virginia.

But it failed in Pennsylvania too. Lamb defeated millions of dollars of race-baiting fear-mongering ads and is now the congressman for Pennsylvania's 18th.

These two examples point to a larger narrative playing out among Republicans as the 2018 midterms quickly approach.

As the failure of the tax scam becomes increasingly evident, not only are Republicans shying away from talking about it, but Democrats like California Rep. Ted Lieu are bringing attention to its failure at town halls.

Meanwhile, the Trump administration has gone out of its way to sow racial tension and launch racist attacks on the immigrant community.

The Department of Justice sued California over sanctuary laws.

Trump vehemently abandoned Dreamers, young people who were provided legal protections under DACA, many of whom know no other home.

The 2020 census will contain a citizenship question designed to undercount both documented and undocumented immigrants.

Trump went on a bizarre racist rant about migrants marching in Mexico.

And now he is threatening to send the National Guard to the U.S.-Mexico border.

As if to foreshadow the coming campaign, Trump couldn't even get through his opening remarks at a tax scam forum before launching into an anti-immigrant rant, praising himself for calling Mexicans "rapists" to launch his presidential campaign.

With a failing economic message, Republicans have shown there is only one other page in their playbook: an increase in race-baiting rhetoric.

Maybe after a massive blue wave at the ballot box in November, Republicans will finally learn their lesson and abandon their hateful and divisive message.