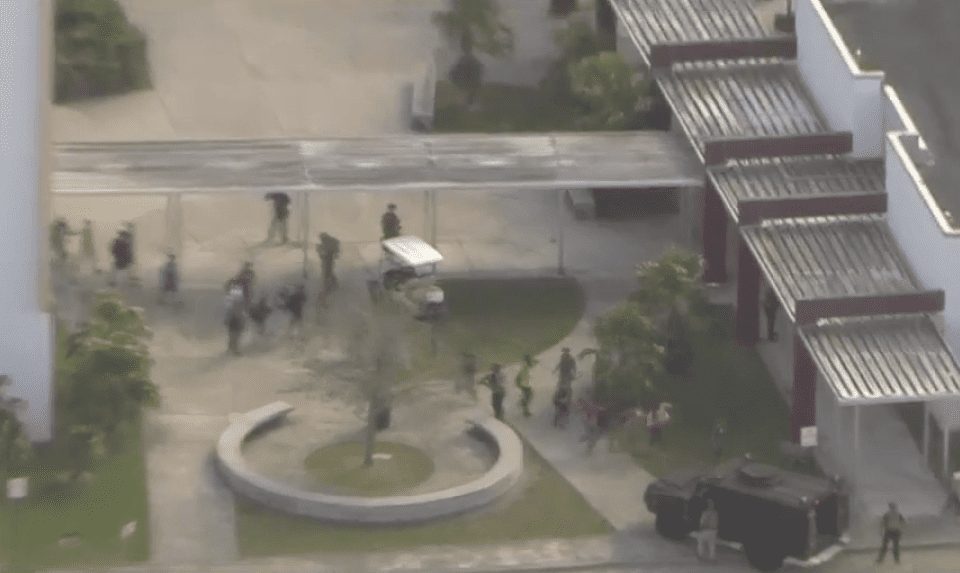 Trump and his team went into hiding when more than a dozen kids were shot and killed in their school.

In a high school in Florida, children hid under their desks, terrified as a barrage of bullets echoed through the hallways of what should be one of the safest spaces in their world.

At least 17 people are dead, according to the Broward sheriff's office, and another 14 injured as a result of the 18th school shooting in the United States this year.

It's only been 44 days since the year began.

As the victims are still being counted at Marjory Stoneman Douglas High, there is damning silence from the White House.

Instead of standing up in front of cameras and the entire nation, unifying the country in a moment of tragedy and pushing for something — anything — to stop the carnage, the White House went into hiding.

Trump hid behind a pair of perfunctory tweets, substituting emotion and empathy with hollow words recycled from the last time innocent Americans were massacred thanks to the nation's addiction to gun violence.

"My prayers and condolences," Trump tweeted, adding, "No child, teacher or anyone else should ever feel unsafe in an American school."

His administration then announced that the daily White House press briefing, which had been delayed several times already, would be canceled.

Police and first responders are sifting through the wreckage left behind by another eruption of American violence, families are confronted with the loss or injury of a child that has no good reason to happen — and the White House Press secretary went stone silent, hiding behind the office door she closed on reporters.

Speaking on the floor of the Senate as the events unfolded, Chris Murphy (D-CT) told America, "Turn on your television right now, you're going to see scenes of children running for their lives."

What Americans did not see was Trump.

It does not have to be this way.

After the Umpqua Community College shooting in October of 2015, where 9 people were shot by a gunman, President Obama didn't hide behind tweets or have his White House shut down lines of communication with America.

He came before the cameras and spoke about the scourge of gun violence, as he had after the Sandy Hook Massacre that Trump's friend Alex Jones says is a hoax.

"Our thoughts and prayers are not enough. It’s not enough," President Obama said in 2015.

"It does not capture the heartache and grief and anger that we should feel. And it does nothing to prevent this carnage from being inflicted someplace else in America — next week, or a couple of months from now."

He added, "And, of course, what’s also routine is that somebody, somewhere will comment and say, 'Obama politicized this issue.' Well, this is something we should politicize. It is relevant to our common life together, to the body politic."

Trump, on the other hand, is in the pocket of the NRA, and his only comments about guns, as a candidate and as president, have been in support of more of them and fewer restrictions on them. He is so immune to basic decency that he hosted the head of that organization at the White House on the anniversary of the Sandy Hook shooting last December.

After America's deadliest shooting in modern history in Las Vegas last October, Trump and his White House refused to even discuss how to avoid future massacres. Trump, however, used the tragedy to fundraise for his re-election campaign.

Unlike his predecessor, who at a minimum expressed understanding and sympathy for the victims of gun violence and advocated for reforms that were popular but opposed by the gun lobby, Trump has endorsed a do-nothing, dead children (and families) policy.

For the Trump administration, it is always too soon after a gun massacre to speak about doing anything — even though Trump never hesitates to call for anti-immigrant policies in the immediate wake of a tragedy.

But when tragic fatalities do not suit his agenda, Trump and his minions go silent, shut the door, and count the latest donations from the NRA.