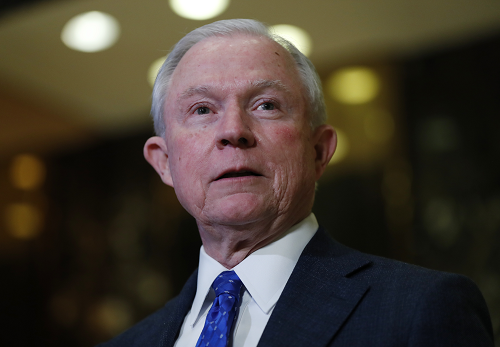 AP photo
Get The American Independent in your inbox

The president-elect and his team have shown marked hostility toward voting rights and a distrust of the electoral system. This is worrisome news for the future of the franchise in this country.

Donald Trump's outsized ego would not let him sit idly by while his opponent Hillary Clinton continued to amass a commanding popular vote victory. Thus, he could not help but tweet a breathtaking explanation for why he lost the popular vote. His incredible claim: Millions of "illegal" votes.

Presidents do not normally imply that their own win was illegitimate. But Trump may be planning to use these groundless statements as a jumping-off point for national voter-suppression efforts. And some of his staffing choices would fall right in line with such a venture.

His tweeted claim about "millions of people who voted illegally" appears to come care of conspiracy theorist Alex Jones' website, Infowars. And this myth seems to have another supporter in Kris Kobach, the Kansas Republican secretary of state who worked as a Trump adviser and has written voter suppression laws which he would see replicated nationwide.

Trump is considering Kobach to head up the Department of Homeland Security, and a picture taken last week shows Kobach with an outline stating "Stop Aliens From Voting." Kobach has also promoted CrossCheck, a notoriously inaccurate voter database used to deny half a million Americans the right to cast a ballot:

On Otterbein Avenue, I met Donald Webster, who, like most in his neighborhood, is African-American.

Crosscheck lists him registered in Ohio as Donald Alexander Webster Jr., while registered a second time as Donald Eugene Webster (no "Jr.") in Charlottesville, Virginia. Webster says he's never been a "Eugene" and has never been to Charlottesville. I explained that both he and his Virginia doppelgänger were subject to losing their ability to vote.

Senator Jeff Sessions (R-AL), Trump's nominee for attorney general, is also notably hostile to voting rights. He has referred to the Voting Rights Act of 1965 as "an intrusive piece of legislation." And as U.S. attorney in Alabama in the 1980s, Sessions targeted voter registration activists for alleged fraud through absentee ballots, in an ultimately fruitless attack:

The federal investigators hid behind the bushes outside of a post office to monitor the activists as they sent out about 500 absentee ballots they collected from elderly black voters, according to the Nation. The investigators took down the information from the ballots and tracked down 20 voters. The elderly African Americans were bused 200 miles to be interrogated and to deliver testimony in front of a grand jury, according to a Washington Post report from the time. Of the 1.7 million ballots cast in the election in question, the investigation was only able to turn up 14 allegedly tampered ballots, The New Republic reported.

Sessions brought 29 charges against each of the activists related to fraud and conspiracy, according to the Nation. A jury, in deliberations that lasted only a few hours, acquitted the three activists. Even after, Sessions insisted “there was sufficient evidence for a conviction," the Washington Post reported at the time. The investigation was also knocked by a panel of judges who objected to how investigators numbered absentee ballots after they were mailed so they could collect the voters' information, the AP reported in 1986, though Sessions continued to stand by the practice.

And then there is Steve Bannon, Trump's chief strategist and senior counselor, who has posited some disturbing ideas:

Ms. Jones, the film colleague, said that in their years working together, Mr. Bannon occasionally talked about the genetic superiority of some people and once mused about the desirability of limiting the vote to property owners.

“I said, ‘That would exclude a lot of African-Americans,’” Ms. Jones recalled. “He said, ‘Maybe that’s not such a bad thing.’ I said, ‘But what about Wendy?’” referring to Mr. Bannon’s executive assistant. “He said, ‘She’s different. She’s family.’”

Trump's claims of a "rigged" election, even after he won the presidency, coupled with the penchant for disenfranchisement shown by much of his inner circle, is extremely troubling news for the future of voting rights in this country.

But there is some hopeful news: The Washington Post's Greg Sargent reports that Democrats in Congress are planning to push back hard, particularly against Sessions, to defend voting rights from the administration's designs on the franchise. They will need to bring everything they have to the fight, and it is promising to know that they are ready to do it.