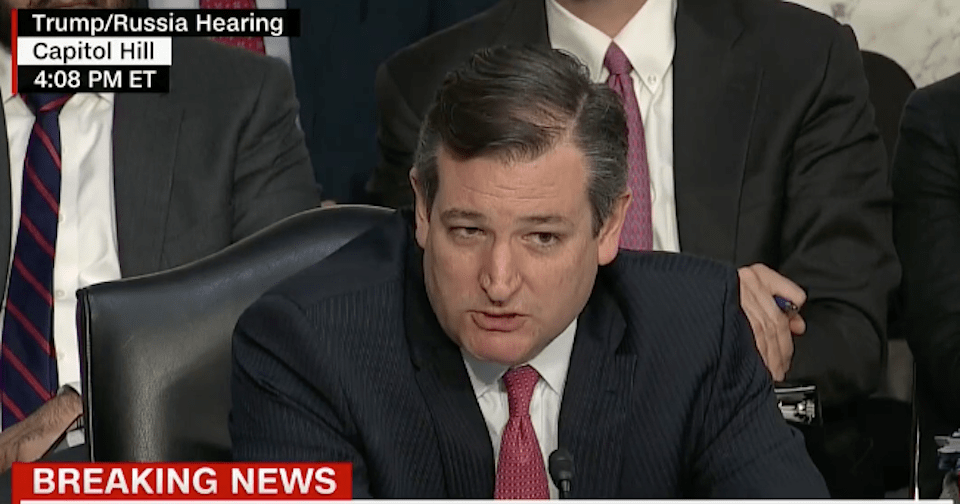 Sen. Ted Cruz tried to intimidate Sally Yates in a debate about the constitutionality of Donald Trump's Muslim ban, but Yates was ready for him and defeated him on his own turf.

Sen. Ted Cruz (R-TX) attempted to intimidate former acting Attorney General Sally Yates during her Senate testimony, but soon discovered he had made a mistake.

Yates had earlier in the hearing explained to Cruz's fellow Texan, Sen. John Cornyn, that she overruled the Office of Legal Counsel, who agreed with the Muslim ban, because arguments on the law "have to be based on truth."

"We're not just a law firm," Yates added, "we're the Department of Justice."

Unlike other senators in attendance, Cruz avoided the topic of Russian election meddling — the reason for the hearing — and instead focused on Yates' determination that Trump's Muslim ban was unconstitutional (a finding that courts have agreed with so far).

Cruz cited a statute giving the president the right to control which "aliens" are allowed into the country. He asked Yates if it gave Trump "broad statutory authorization" to do so. She agreed, but then pointed out to Cruz, who considers himself a constitutional expert and a master debater, that the Trump ban was in violation of a "further provision" of the law he had cited, which states that "no person shall receive preference or be discriminated against in issuance of a visa because of race, nationality, or place of birth."

YATES: I would, and I am familiar with that. And I’m also familiar with an additional provision of the INA that says, ‘No person shall receive preference or be discriminated against in issuance of a visa because of race, nationality, or place of birth.’ That, I believe, was promulgated after the statute that you just quoted, and that’s been part of the discussion with the courts with respect to the INA, is whether this more specific statute trumps the first one that you just described. But my concern was not an INA concern here. It rather was a constitutional concern, whether or not this — the executive order here violated the constitution specifically with the establishment clause and equal protection and due process.

CRUZ: There is no doubt the arguments that you laid out are arguments that we can expect litigants to bring, partisan litigants who disagree with the policy decision of the president. I would note on January 27, 2017, the Department of Justice issued an official legal decision, a determination by the Office of Legal Counsel, that the executive order, and I’ll quote from the opinion, ‘The proposed order is approved with respect to form and legality.’ That’s a determination from OLC on January 27th, that it was legal. Three days later you determined, using your own words, that although OLC had opined on legality it had not addressed whether it was, quote, ‘wise or just.’

YATES: And I also, in that same directive, Senator, said that I was not convinced it was lawful. I also made the point that the office of OLC looks purely at the face of the document, and again, makes a determination as to whether there is some set of circumstances under which some portion of that EO would be enforceable, would be lawful. They importantly do not look outside the face of the document, and in this particular instance, particularly where we were talking about a fundamental issue of religious freedom — not the interpretation of some arcane statute, but religious freedom — it was appropriate for us to look at the intent behind the president’s actions. And the intent is laid out in his statements.

After Cruz had been bested in this exchange on the legality of Trump's Muslim ban, he reportedly left the hearing room, as seen in this photo provided to Shareblue by an attendee: Ted Cruz has often tried to use his debating skills to get the best of his opponents, but without flinching, Sally Yates took him on directly, and won.