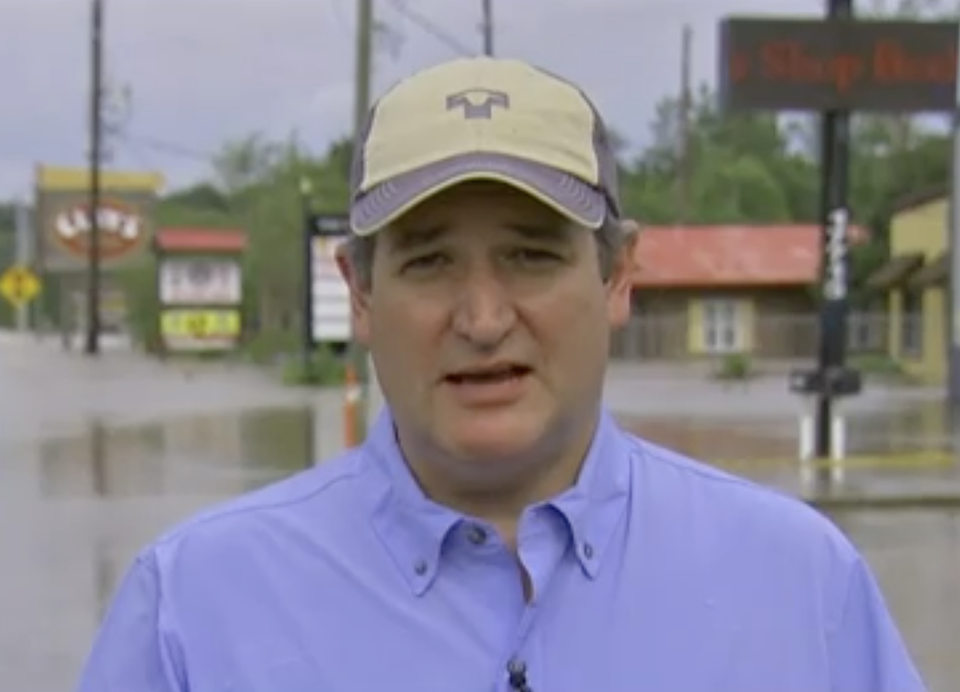 Ted Cruz lashed out at fact-checkers this week after getting caught making factually incorrect statements about the 2012 Hurricane Sandy relief bill that he opposed.

Republican Sen. Ted Cruz has found himself in an awkward position this week, asking the federal government to provide disaster relief funding for his flood-ravaged state of Texas while also trying to justify why he voted against the very same thing after Hurricane Sandy in 2012.

New Jersey Gov. Chris Christie called out the Texas senator for his hypocritical stance on federal disaster relief, prompting Cruz to defend his 2012 vote by saying the bill was “filled with unrelated pork”:

"The problem with that particular bill is it became a $50 billion bill that was filled with unrelated pork," Cruz told MSNBC. "Two-thirds of the bill had nothing to do with Sandy. And what I said then and still believe now is it's not right for politicians to exploit a disaster and people who are hurting, for them to pay for their own political wishlist."

Fact-checkers pounced on Cruz’s statement. The Washington Post quickly and thoroughly debunked his claim that two-thirds of Hurricane Sandy relief funding had nothing to do with the hurricane, as did PolitiFact and several disaster relief experts.

“It is wildly incorrect to claim that the bill was 'filled with unrelated pork'," Washington Post fact-checker Glenn Kessler wrote. "The bill was largely aimed at dealing with Sandy, along with relatively minor items to address other or future disasters.”

Many of the items that Cruz dismissed as "unrelated pork" were actually long-term projects to help the area recover from Hurricane Sandy and develop more resilient public infrastructure. As one disaster historian put it, Cruz's claim that these provisions were unrelated to disaster recovery "[exposes] his failure to connect the causes of disasters to their effects."

But Cruz wasn't interested in hearing any of it.

In an interview with MSNBC's Katy Tur, Cruz accused his critics of "political sniping" and said now isn't the time to discuss disaster funding — even though he's in the process of requesting it.

Cruz took things even further during a Wednesday morning interview on "Fox & Friends." He accused his critics and fact-checkers of being “desperate to get their names in the news” and willing to say “whatever they need to do that," going so far as to suggest that they are not focused on "the lives that are being threatened":

CRUZ: I'm sorry there are politicians that are desperate to get their names in the news and saying whatever they need to do that. We have a crisis on the ground of people who are hurting right now, people who are in harm’s way — whose lives and families are in jeopardy as we speak. And I’ll tell you, my focus — and I wish the focus of others — would be on saving the lives that are being threatened.

I have been spending much of the past week — I've been in Houston almost nonstop — and I've been spending much of the past week trying to coordinate federal, state, and local search-and-rescue efforts, make sure we have the assets on the ground, make sure we have helicopters and boats and high water trucks, make sure we're able to get the resources to the people who are in need, and I think that that should bring us together. [...] For folks who are focused on raising political shots and snipes about the Sandy Bill, you know, facts matter.

It should be noted that Cruz, who is up for re-election next year, has made sure his name has been in the news quite a bit this week, with multiple appearances on Fox to talk about what he's doing in response to the hurricane and to defend his flip-flop on funding for hurricane relief.

He is right, though. Facts do matter. And in this case, the facts are not on Cruz's side.