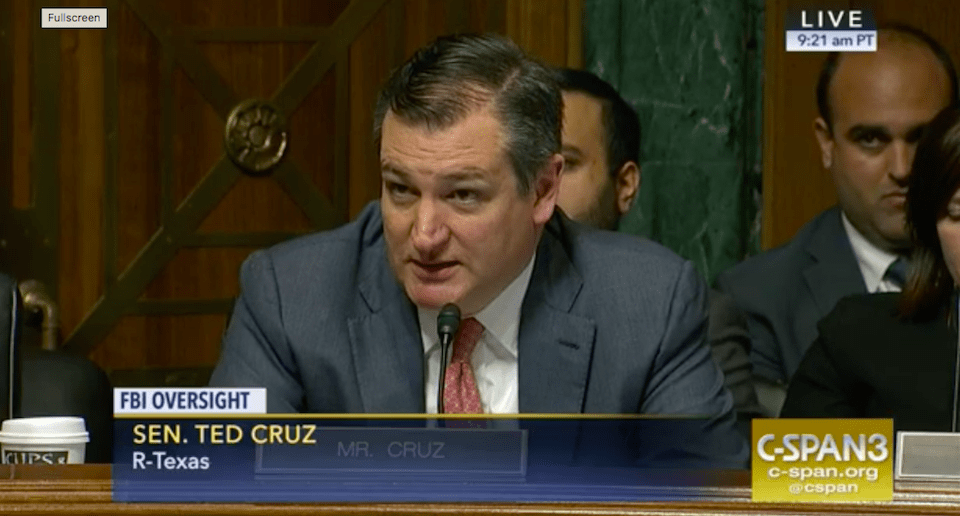 Sen. Ted Cruz used his time during FBI Director James Comey's testimony on the Trump campaign and Russia to bring up the discredited and long-closed investigation into the IRS' treatment of the tea party movement. Despite Donald Trump's personal attacks on him, Cruz was willing to join the Republican team effort to soften the blow of ongoing Russian revelations.

Sen. Ted Cruz (R-TX) used his time during the Senate Judiciary Committee hearing with FBI Director James Comey to rehash the agency's closed investigation of the IRS' supposed — and debunked — mistreatment of the the tea party, rather than deal with Russia and Donald Trump.

Cruz's failed presidential campaign was a target of malicious smears by Trump, who floated the conspiracy that Cruz was not a citizen, and that his father took part in the JFK assassination.

Nevertheless, Cruz used his time during the Senate hearing on Wednesday to help Trump deflect from the ongoing scandal, instead asking Comey about conservative complaints under President Obama that the IRS had unfairly targeted tea party groups seeking nonprofit status.

Alleging without evidence that former Attorneys General Eric Holder and Loretta Lynch "stonewalled" that investigation, Cruz asked if the FBI was currently investigating the incident. Comey told him, "We completed that investigation and the department declined prosecution."

#Comeyhearing @TedCruz digs up IRS "investigation" to distract from Russia. Comey dumps bucket of cold water on him. pic.twitter.com/te1RjhZbxv

CRUZ: This committee has had substantial focus also on the practice of the previous IRS of targeting citizens and citizen groups based on their political speech, political views, and perceived political opposition to President Obama. And the previous Department of Justice, both Attorneys General Holder and Lynch, in my view stonewalled that investigation. Is the FBI currently investigating the FBI’s — or rather the IRS’ unlawful targeting of citizens for exercising political speech?

COMEY: I think you’re referring to the original — the investigation focusing on, particularly, groups allegedly associated with the tea party?

COMEY: We completed that investigation and the department declined prosecution. We worked very hard on it, put a lot of people on it, but couldn’t make what we thought was a case. And to my knowledge, it has not been reopened.

CRUZ: So, did the FBI recommend prosecution? You said you couldn’t make the case.

In 2015, Assistant Attorney General Peter Kadzik wrote in a letter to members of Congress, "We found no evidence that any IRS official acted based on political, discriminatory, corrupt, or other inappropriate motives that would support a criminal prosecution."

Cruz is certainly aware of this outcome, as he has been one of the loudest voices pushing the issue for years. Despite Trump's attacks on him and his family, Cruz was more than willing to try to derail Comey's testimony and focus from the Trump campaign's alleged misdeeds.

Cruz's technique won't work, but it follows the pattern of congressional Republicans repeatedly doing their best to aid the leader of their party to avoid blame.