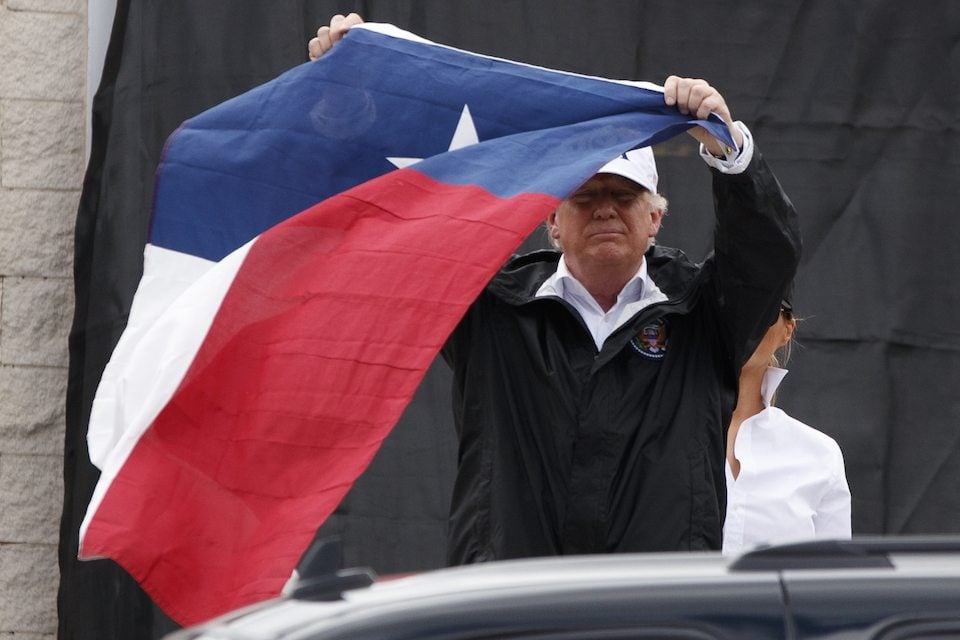 Trump can't even feign sympathy for hurricane victims without lying.

Hurricane Harvey was the first test of how Donald Trump would handle a domestic crisis — and he failed that test miserably.

On Tuesday, Trump traveled to Corpus Christi, Texas, to be briefed on the response to the storm, which destroyed an estimated 30,000 to 40,000 homes in the Houston area alone. With the Federal Emergency Management Agency (FEMA) expecting to see as many as 450,000 people register as disaster victims, the impact of Harvey could end up being greater than Hurricane Katrina.

However, during his visit to the area, Trump was apparently more concerned with seeing large crowds at his speech than seeing the impact of the disaster or assessing the need for help.

"With Houston still inundated, Trump kept away from the heart of the disaster zone," Dallas News reported. "Even a few miles from Corpus, he would have encountered homes destroyed by flooding. But with first lady Melania Trump and an entourage of cabinet members in tow, he kept his distance."

According to Dallas News, Trump didn't even visit a hurricane shelter or have any interactions with anyone who lost a home or was otherwise affected by the storm.

So when Trump tweeted out a statement about "witnessing first hand the horror & devastation caused by Hurricane Harvey," reporters from the area were baffled — and it didn't take long for Trump to get called out for lying about his visit.

Trump hasn't addressed the issue or given any explanation for why he would lie about his brief visit to Texas.

In the past, Trump has viciously attacked others for making similarly misleading claims. Most memorably, Trump and his supporters mercilessly went after former NBC Nightly News anchor Brian Williams after a 2015 segment in which the reporter misrepresented events that happened during his 2003 Iraq War coverage.

On Tuesday night, Trump ally and Fox News host Sean Hannity ripped the media for their coverage of Hurricane Harvey, invoking Williams' name in his rant.

“Would you like to get lectured by ‘Lyin Brian’ Williams about dead bodies floating outside of the Ritz where there’s no water?” Hannity raged. “We’re going to get lectures from him … about honesty?”

We'll be eagerly awaiting Hannity's rant about Trump's own dishonest statement about what he "witnessed" in Texas.