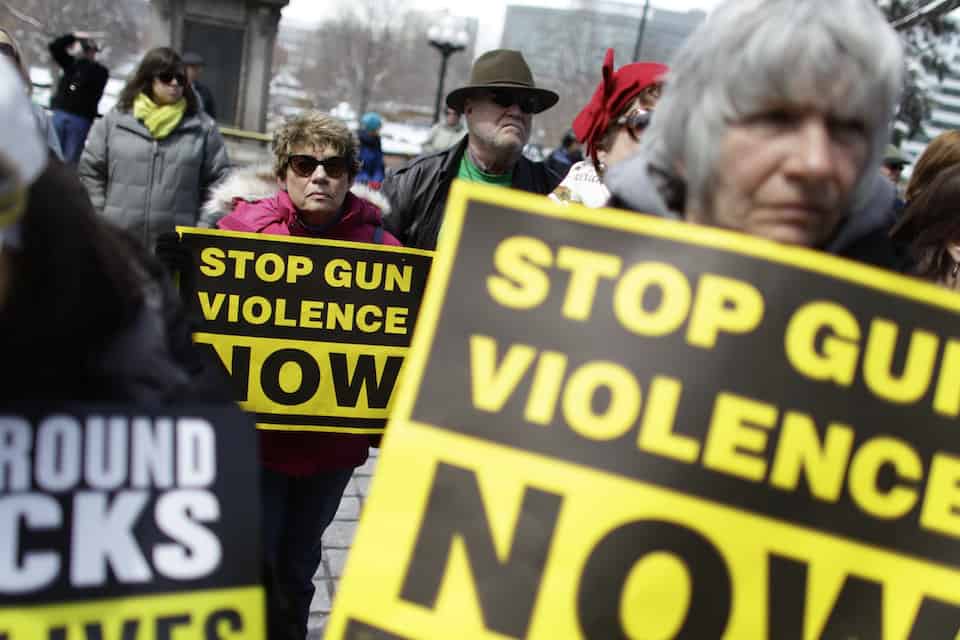 (AP Photo/Brennan Linsley, file)
Get The American Independent in your inbox

Silencers create major public safety risks. But just in time for two painful anniversaries, the gun lobby is trying to sneak deregulation of silencers past the public.

And the gun lobby has chosen, at this time of painful memories and still-fresh grieving by survivors and victims' loved ones, to try to secretly pass deregulation of gun silencers by sneaking the provision into an otherwise non-controversial bill.

The House Natural Resources Committee will be holding a legislative hearing on the Sportsmen Heritage and Recreational Enhancement (SHARE) Act, which in and of itself, does nothing troubling.

But knowing that the public would pay little to no attention to such an anodyne proceeding, gun rights activists are using the SHARE Act to pass H.R. 367, the mendaciously named Hearing Protection Act. The bill's backers claim it will help protect hunters' hearing by making silencers easier for them to access.

In other words, the bill would remove deadly firearm silencers from the National Firearms Act (NFA), undermining that crucial federal law and endangering untold numbers of people.

As Everytown for Gun Safety notes, "Silencers pose a significant danger in the wrong hands, making it harder for bystanders or law enforcement to identify and react quickly to gunshots."

The group points out that it is often the sound of gunfire that alerts police to an unfolding incident. As just one example, in Washington, D.C., over 1,000 calls to 911 each year are from citizens who have heard shots fired nearby.

Without the need to pass a background check, violent felons, domestic abusers, terrorists, and other dangerous people would have largely unfettered access to silencers, and thus the capacity to commit deadlier crimes without the sound of gunshots to alert bystanders.

And particularly in mass shootings — like Orlando, Charleston, Sandy Hook, Virginia Tech, Columbine, and so many more — as Everytown notes, "being able to hear the gunshots can mean the difference between life and death."

And as David Chipman, a retired 25-year employee of the Bureau of Alcohol, Tobacco, and Firearms, told NPR, H.R. 367 is "reckless" and a "threat to public safety."

He pointed out that, thanks to the NFA, silencers are rarely used in crimes, and it's ludicrous to try to change that.

"Right now the system seems to be working," Chipman says. "It’s allowing for [silencer] sales to go up and we’re rarely seeing cops killed with these things, so why fix what’s not broke?"

But to those who oppose gun safety laws, nearly any law limiting weapons and ammunition is seen as being "broke," and needs to be "fixed" by doing away with as many regulations and restrictions as possible.

Duncan, who has received money from the National Rifle Association, insisted to NPR that his "legislation is about safety — plain and simple."

But that is simply not true: Silencers create greater risk and put even more people in peril during already-deadly scenarios.

In a statement to Shareblue, Shannon Watts, founder of Moms Demand Action for Gun Sense in America, which is part of Everytown, put the danger of this bill clearly:

This provision would profit gun manufacturers while making law enforcement's job more difficult and potentially making mass shootings even more deadly. The gun lobby's bill would benefit gun manufacturers at the expense of public safety, which is why Moms Demand Action volunteers will be at the hearing on Wednesday. The gun lobby and their friends in Congress need to know their constituents are paying attention.

And in a press release, the National Law Enforcement Partnership to End Gun Violence urged opposition to the bill because of the "grave risk" it would bring to the public as well as police officers.

The United States of America has more firearms in civilian hands than the next ten developed nations, and that fact alone causes our law enforcement personnel great concern for their safety. Ambush killings of police officers reached a 20 year high in 2016 – how many more will be sacrificed if assailants can fire at our police officers without fear of quick detection and rapid response?

"The widespread and uncontrolled distribution of silencers to an unwary civilian population, combined with the sheer number of firearms freely available in America, is a step in the wrong direction and will result in tragedy," the group added.