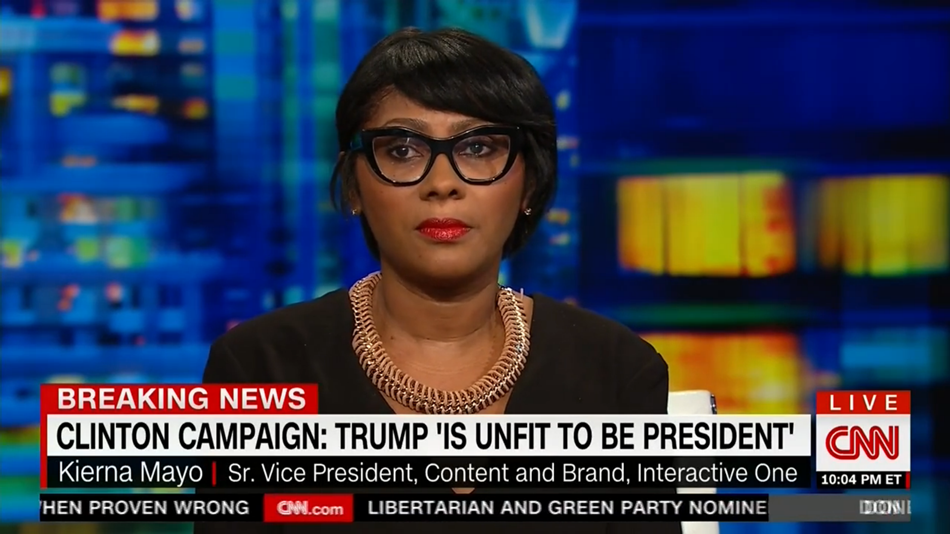 With some notable exceptions (David Fahrenthold comes to mind) the national political media have failed America in 2016. There is overwhelming, objective evidence that they are tipping the scales in favor of Donald Trump, offering cursory coverage of his myriad transgressions while obsessing over Hillary Clinton's every word. As a result, trust in the mass media is at an all time low.

On a day when Donald Trump has again invoked the assassination of Hillary Clinton, this response, from Kierna Mayo, is stunning in its simplicity and power:

Time is winding down and most of the 2016 race is in the rear view mirror. The view is ugly.

Funny how the media don't seem nearly as concerned about Hillary's health when violence is being incited against her. #InterrogateTrump

Hillary Clinton's emails have been covered by major media outlets for 451 consecutive days (and 558 out of the past 562 days). Her every mistake is magnified and turned into a massive controversy. Even her cough is analyzed by pundits. She is scowled at while recovering from pneumonia and treated with dripping disdain at a Commander-in-Chief forum.

Meanwhile, Trump coasts along, leaving a trail of filth behind him. He mocks the press, toys with them, teases them. And they ask for more. Studies come out that confirm he gets better coverage. And they give him more.

Clinton is saddled with the Romney-esque 47% label for speaking the truth (inelegantly) about some of Trump's supporters, while Trump is given a free pass for actually adding 3 points to Romney and calling 50% of the country lazy freeloaders.

Brian Beutler of the New Republic sums it up:

These are the cardinal facts of this election. They should be the dominant upshot of any significant increment of news coverage and analysis—the thing that reaches and sticks with casual news consumers, in the same way that even musical dilettantes can hum the leitmotif of Beethoven’s fifth symphony.

For several weeks now—including since Labor Day, when most Americans truly began paying attention to the campaigns—these truths, which we all took for granted six months ago, have not been communicated to glancing news consumers. They’ve receded from most article leads, headlines, front pages, and A-block TV segments.

That development is the product of many collective choices and thousands of individual ones. It is an institutional failure, and as such, a major and abrupt course correction seems highly unlikely. But that doesn’t absolve reporters, editors, producers or anyone else who is part of the system.

There will be a reckoning when this race is over, a moment of truth for the mass media. And it is unclear whether they can ever recover from the damage they've done to their own credibility.