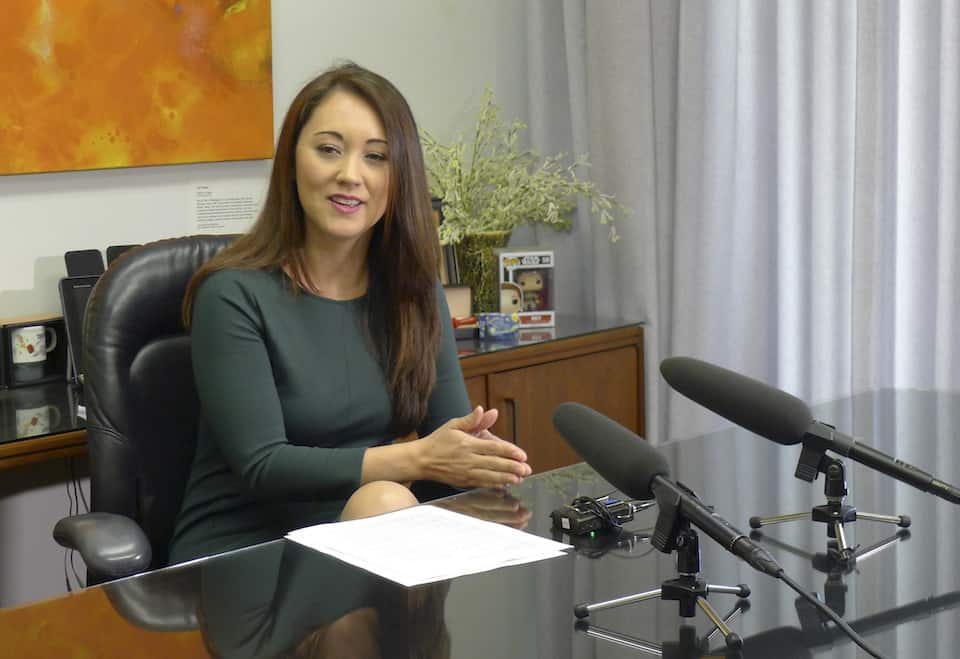 (AP Photo/Cathy Bussewitz)
Get The American Independent in your inbox

The defection of state representative Beth Fukumoto is yet another body blow to Republicans in a state where their party is practically going extinct.

Beth Fukumoto has been on the outs with the Republican Party of Hawaii since the beginning of this year.

Initially elected to the Hawaii House of Representatives in 2012, Fukumoto was promoted just a year later to House Minority Leader, and showcased by the Republican National Committee in their Women on the Right Unite initiative. By all accounts, she was a meteoric young blue-state conservative, and Republicans had high hopes for her.

Then, this February, she attended the Women's March in Honolulu, denouncing Donald Trump as a bully. Immediately, her fellow members of the Hawaii House Republican caucus demanded behind closed doors that she promise never to criticize Trump again. When she refused, they fired her as Minority Leader.

This week, after seeking feedback from her constituents, Fukumoto announced that she was resigning from the Republican Party:

Next, I'll be seeking membership in the Democratic Party. View my full announcement here: https://t.co/XPULYvgGlc

In a blistering letter to her former colleagues, Fukumoto essentially said that not only is Trump racist and sexist, but they were all complicit in it:

Here's my letter of resignation from the Republican Party outlining my reasons for leaving. https://t.co/w6asstD8YS

This election, I saw members of my party marginalizing and condemning minorities, ethnic or otherwise, and making demeaning comments towards women. So, when I listened as our now top office holder refused to condemn the internment of Japanese Americans during World War II, speaking out didn't seem like a choice.

The day after the inauguration, I spoke at the Hawaii’s Women’s March. I said we should all agree that the campaign remarks made by our president about women and minorities were unacceptable, and that it was our responsibility, regardless of who we voted for, to show our kids that everyone should be treated with respect.

A call for kindness and respect should have been a non-partisan message, but it was controversial within the party. Within 24 hours, calls for my resignation or censure abounded. My caucus told me that they would remove me from leadership unless I promised to not criticize the president for the remainder of his term. That was a promise I simply could not make.

She closed her letter by warning Republicans in other states that, if they continue to resist diversifying their party, they will "inevitably discover what it's like to be a super minority, or a Republican in Hawaii," and that because "America's demographics will keep changing," the GOP "can't keep marginalizing voices like mine and the people that care about what I'm saying."

While it undoubtedly took courage for Fukumoto to stand for her principles, her resignation is not an isolated incident. In fact, the reason she became House Republican Leader so quickly, after just a year in office, is because the previous leader, Roy M. Takumi, also resigned from the Republican Party to become a Democrat.

There are now only five Republicans left in the 51-seat state House of Representatives.

And that is actually a strong caucus compared to the state Senate. Hawaii actually has no Senate Minority Leader, because there is no Senate Minority. There are now 25 Democrats in the Hawaii Senate and zero Republicans — the only partisan state legislative chamber in the entire country where one party is completely shut out. The last Republican state senator, Sam Slom, was defeated for reelection by Democrat Stanley Chang last year.

Republicans are similarly shut out of the executive branch; the governor and lieutenant governor are both Democrats, and all other elected executive offices in Hawaii are nonpartisan.

Although the GOP controls a huge majority of federal and state offices nationwide, the Republican Party of Hawaii has been rapidly crumbling on an unprecedented level. The state's incredibly diverse demographics and overwhelming antipathy towards Trump have resulted in Republicans losing virtually every state-level office to defeats and defections.

And if the few remaining Republicans in Hawaii continue to alienate and push out moderate conservatives like Fukumoto, they will be locked out of power for a long time to come.