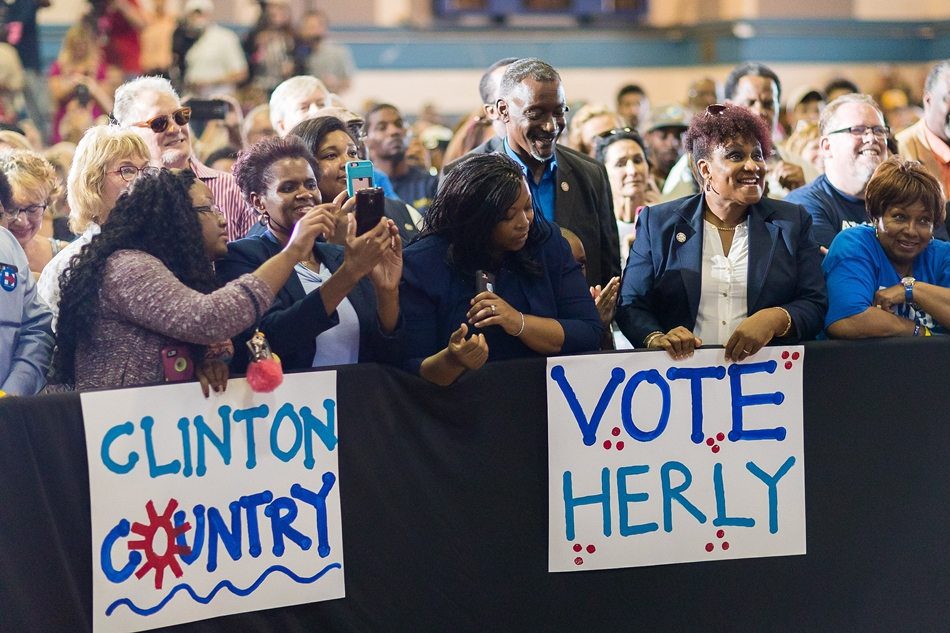 Donald Trump has thoroughly alienated marginalized people by running a campaign of bigotry, and now he deflects accountability for his struggling campaign by claiming the election is rigged. He is not the first: It is part of a Republican tradition rooted in the denial that the country's future is not decided exclusively by the most privileged voters anymore.

For years now, the Republican Party has been sacrificing its relevance to a terminal failure to understand just how unappealing their homogenized organization has become to the multicultural American public.

The GOP has adhered to willful denial that, despite all of the efforts to underestimate, delegitimize, intimidate, and criminalize Democratic-leaning voters, a marginalized majority has successfully assembled itself to impact national elections.

Which is the absolute opposite of "rigging."

But rather than work to broaden their outlook and pivot their policies to reach out to all communities, Republican leaders have consistently doubled down on their institutionalized prejudices. They have willfully engaged in erasure of the oppressed communities — women, youth, people of color, LGBTQ people, immigrants, disabled people, Jews, Muslims, and college-educated voters — who support Democratic politicians by wide margins.

The reality is that, for some time, the inherent privilege in a political party which caters largely to white, heterosexual, cisgender, Christian voters has essentially “rigged” elections in their favor, facilitated by state-sanctioned voter suppression and their own deceitful practices.

In 2008, the Republican Party launched a blitz on ACORN, a now defunct collection of organizations aimed at community advocacy, most notably voter registration. In the final presidential debate, John McCain said the group "is now on the verge of maybe perpetrating one of the greatest frauds in voter history in this country, maybe destroying the fabric of democracy." Sound familiar?

Though Barack Obama went on to become president, ACORN’s fate was sealed in the form of the Republican “Defund ACORN Act,” which capitalized on irrational and unsubstantiated fear of voter fraud to shutter a group responsible for registering 1.3 million voters, mostly low-income people of color.

Despite the organization’s exoneration, and a host of scientific research to dispute the existence of widespread voting irregularities, the seed of distrust was already sown, and has led to numerous attempts, many of them successful, at voter suppression. The GOP's mendacity has been so fruitful that even though ACORN hasn't existed since 2010, 40 percent of Trump voters still believe it will steal the election for Clinton in 2016.

Moreover, the very success of groups like ACORN, and the historical barrier broken by the election of the nation’s first Black president, were used as justification for the Supreme Court’s dismantling of the Voting Rights Act in 2013. In other words, voter suppression and loosening of voter protections suddenly became necessary when historically disenfranchised voters mobilized to elect one of our own.

But it seems that even all of this duplicity and Machiavellian tactics are not enough to save the party from insurmountable demographic changes which will render the 2016 electorate the most diverse in U.S. history, and thus predictably inhospitable to an insular GOP that is ever more reliant on exploiting bigotry and anger.

Into this mire enters Donald Trump.

And so come the adamant charges of “rigging,” which to the GOP, and to Trump in particular, is simply synonymous with losing to someone whom they do not like.

“Every time Donald thinks things are not going in his direction, he claims whatever it is is rigged against him,” Clinton said in the final presidential debate, in response to her opponent’s insistence that he will not necessarily accept the results of the election if she should win.

It was a moment the viewing audience was anxiously awaiting after talk of Trump’s unprecedented stance dominated the news cycle. Going beyond the GOP’s previous reprehensible behavior, for the first time in American history, a major party's nominee is now dangerously undermining the legitimacy of our democracy by declaring that he will not accept a loss.

As we look back on this election in the future, we will note that Trump’s refusal to take an electoral “no” for an answer went into full swing around the same time that his miserly 1995 tax returns, 2005 audio of his self-admitted sexual predation, and present day accusations of his past unwanted sexual advances began to sink his campaign. As all of these issues arose, we began to be subjected to conspiratorial rhetoric from Trump, and insistence that if he loses it will be solely because of “rigging,” not this litany of disqualifications.

In this way, he is merely perpetuating the same familiar paranoia and desperation of his party.

And while it may be unseemly, it is not surprising. It comes from a man who refuses to ever take responsibility for anything that is the least bit negative, let alone to apologize. And it comes from a party that steadfastly refuses to accept the overarching reality of their own impending and self-inflicted irrelevance.