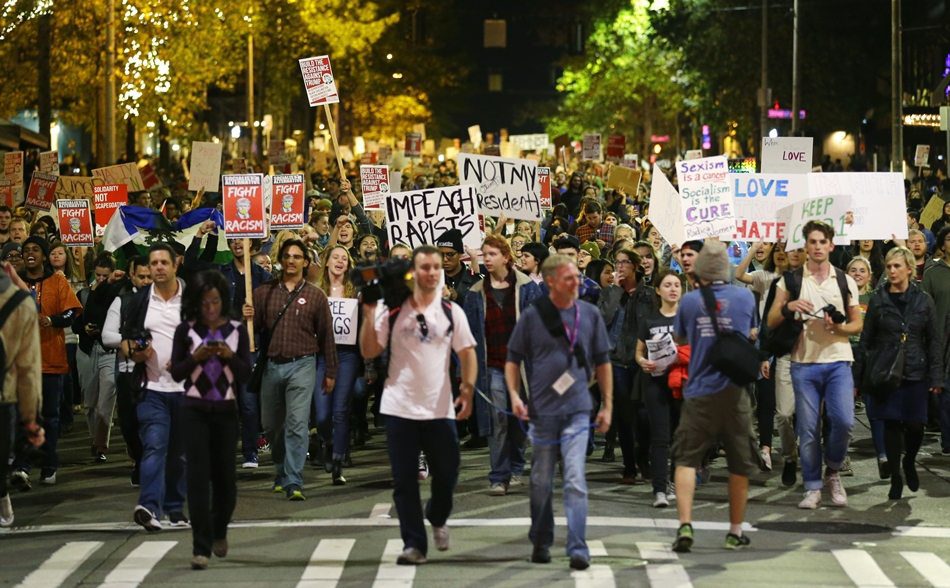 New York Times columnist Charles Blow pens a powerful piece about what a Trump presidency means to him, concluding with this call to action: "Power must be challenged, constantly. That begins today."

Not only am I #StillWithHer, but I'm with the MAJORITY of Americans who voted for her. #TrumpProtest

The body blow of Trump's win is being processed by the millions of Americans who opposed him. The resistance to his presidency is already taking shape. Protesters took to the streets to make their voices heard:

Tens of thousands in at least 25 US cities -- including New York and Nashville, Chicago and Cleveland, San Francisco and Seattle -- shouted anti-Trump slogans, started fires, and held candlelight vigils to mourn the result.

Charles Blow sets out the parameters of the resistance to the worst promises of a Trump presidency:

Mr. Trump will become this country’s 45th president. For me, it is a truly shocking fact, a bitter pill to swallow. I remain convinced that this is one of the worst possible people who could be elected president. I remain convinced that Trump has a fundamentally flawed character and is literally dangerous for world stability and injurious to America’s standing in that world.

My thoughts are with the poor people afflicted by ill health who were finally able to receive medical insurance coverage, sometimes lifesaving coverage, and the fear they must feel now that there is a president committed to repealing and replacing it (with what, I don’t know), and who has a pliable Congress at his disposal.

When I think of all these people and then think of all the people who voted to make this man president — and those who didn’t vote, thereby easing the way for his ascension — I cannot help but feel some measure of anger. I must deal with that anger. I don’t want to wrestle it to the ground; I want to harness it.

We need a Trump presidency to succeed to some degree — at least to have it do as little harm to the republic as possible — in order for America to remain safe, steady and strong during his tenure.

That doesn’t mean that I don’t believe Trump to be an abomination, but rather that I honor one of the hallmarks of our democracy and that I am an American interested in protecting America.

That said, it is impossible for me to fall in line behind an unrepentant bigot. It will be impossible for me to view this man participating in the pageantry and protocols of the presidency and not be reminded of how he is a demonstrated demagogue who is also a sexist, a racist, a xenophobe and a bully.

That is not a person worthy of applause. That is a person who must be placed under unrelenting pressure. Power must be challenged, constantly. That begins today.

Those who think that the inclusion, tolerance, love and progressive vision that Hillary's campaign embodied will somehow evaporate are making a terrible miscalculation. There are millions of Charles Blows across America ready to fight to preserve our core American values.

We are among them.