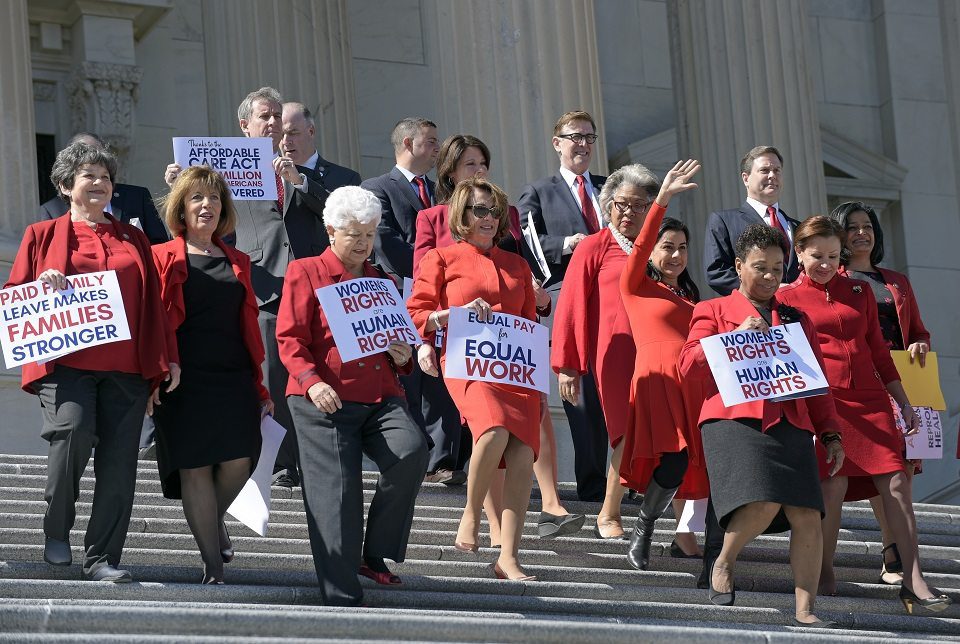 Democratic Congresswomen rallied on the steps of the U.S. Capitol to highlight International Women’s Day and A Day Without Women, putting Donald Trump and the GOP on notice that they would not be backing down in the struggle for equal rights.

House Democratic Leader Nancy Pelosi (D-CA), along with other members of the Democratic Women’s Working Group, took to the steps of the U.S. Capitol in order to express solidarity with events held around the country and to highlight the importance of women workers to the economy.

Wearing red and holding signs bearing sentiments like "Equal pay for equal work," "Paid family leave makes families stronger," and "Don't turn back the clock on women," the group made a powerful tableau of unrelenting resistance against the Trump administration and the Republican-controlled Congress.

Pelosi called for more women to run for office and to be included in leadership positions, and said that if she ruled the world the one thing she would do to make the future better would be "the education of girls."

PELOSI: Since it’s Women’s International Day, I wanted just to tell you that from time to time, in my capacity as Speaker and then Leader, people will say to me, "If you were in control of everything in the world, if you ruled the world, what one thing would you do to make the future better?" That’s an easy answer: The education of girls. [applause] The education of girls so that they can succeed, that they can provide for their families, the respect that it commands for them, to respect their intellect and their decisions about the size and timing of their families. So much goes into the word of respect: Education, family planning, and the rest.

So here we are today. This is a day that is very interesting because we are observing the 100th anniversary of the first woman elected to Congress: Jeanette Rankin, of Montana. It’s pretty exciting! Women in America did not have the right to vote yet; in Montana they did, and they sent a woman to Congress. And she made a difference here. And she said at the time, "I may be the first woman in Congress, but I know one thing for sure, I will not be the last." [applause] And she certainly has not been. But we want more.

Nothing is more wholesome to the political process or the governance of our country than the fuller participation and leadership of women. So, I’ve said to the women [applause] — okay, you can applaud that! I said to the women in the march — aren’t we proud of the march and all that it engendered throughout the world — said to the women, 'You have marched for progress, now you must run for office.' [applause] So as we try to protect a woman’s right to choose, the education of women, the fuller participation in not only politics and government but in every aspect, every aspect of the life of a country, and the society, we know one thing for sure: That when women succeed, America succeeds. [applause] And when women succeed, as my colleague said, the world succeeds.

Other speakers took the opportunity to point out the breadth of issues that are included under the banner of women’s equality.

Rep. Nanette Barragán (D-CA) slammed Trump for demeaning "not just women, but immigrants," and described his policies at the U.S. border as "unreal" and "un-American." Discussing Trump’s plans to separate women and children at the border, Barragán said Trump "should be ashamed of himself." She concluded, "Immigration rights are women’s rights."

Rep. Cheri Bustos (D-IL) highlighted the income disparity that exists between men and women, despite legislation signed into law by Presidents Kennedy and Obama, and that the disparity is even worse for Latinas and Black women. "This isn’t just a women’s issue, this is a family issue."

Rep. Jackie Speier (D-CA) explained to the rally that the Constitution still lacks a prohibition on discrimination based on gender, "and we must change that."

Rep. Brenda Lawrence (D-MI) noted the lack of women in the science and technology fields (STEM), as well as at the CEO level, and said "We’re here today because we are going to change those numbers."

Rep. Pramila Jayapal (D-WA) said, "The Trump administration and the Republicans in Congress have been waging a war on our health and our ability to make those decisions." She asked the audience, "Sisters, we are not going to let them roll back progress on the gains we’ve made, are we?" She concluded firmly: "These are our reproductive organs, take your hands off of them, they belong to us."

Trump and the GOP are surely going to continue their antagonism towards women's equality. But Democratic women — as well as women all across the nation — are ready to fight back, on International Women's Day and every day going forward.