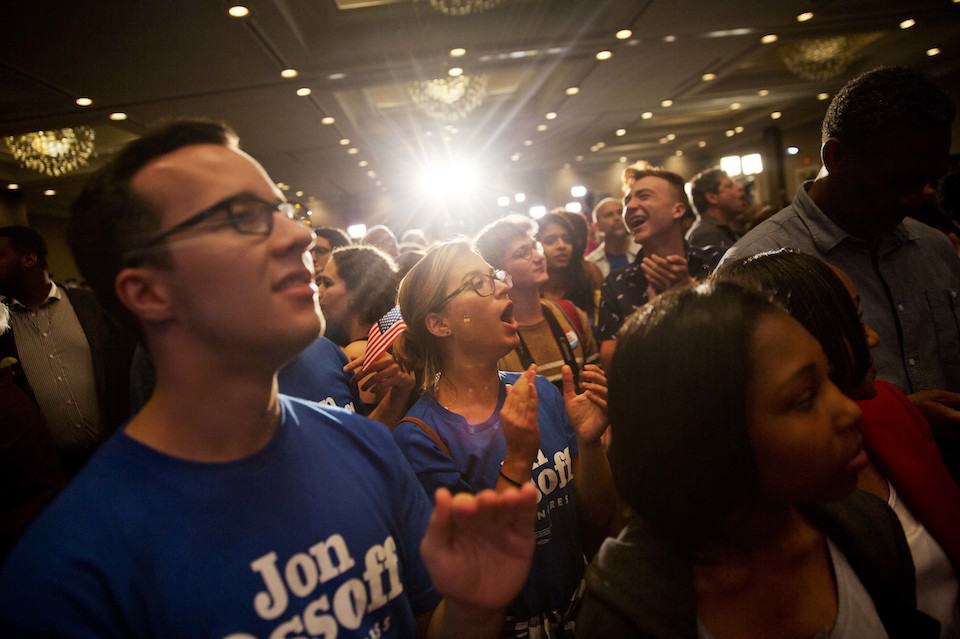 The resistance cannot and should not write off districts like GA06.

Democrat Jon Ossoff's loss in a special election in Georgia’s 6th Congressional District to Republican Karen Handel, by a margin of 3.8 percent, disappointed Democrats and led to criticisms of Ossoff and the Democratic Party.

As is often the case, many of the criticisms were not based on facts.

Ossoff was criticized for not being inspiring, after running the "largest field campaign in House election history" with over 12,000 volunteers and substantial on-the-ground enthusiasm. Moreover, small-dollar donors comprised almost two-thirds of Ossoff’s record-breaking fundraising haul, which helped him offset a lopsided amount being spent on Handel’s behalf by GOP-aligned groups and PACs.

The more strident criticism, however, was reserved for Ossoff’s — and the Democratic Party’s — voter targeting. Some on the left claimed that the Democratic Party’s outreach to "upscale whites," "wealthy voters," "Romney voters," or "moderate Republicans" in suburban districts like GA-06 was seriously flawed, and should be abandoned in favor of an outreach to Donald Trump voters who had voted for President Barack Obama in 2012.

Districts like GA-06 have a high percentage of CE whites — which is significant because Clinton was likely the first Democrat to win CE whites nationally despite running on a platform of significant upper income tax hikes. CE whites have voted far less Republican than NC whites since 1996, despite successive Democrats running on more progressive policies, such as tax increases.

14) On every other major issue, college whites support progressive position by margins of 7% to 32% points more than net support among WWC pic.twitter.com/5x0BM5f5xA

In contrast, since the mid-1990s, NC whites have significantly shifted away from the Democratic Party towards the GOP, just as the GOP became a party of complete deregulation and tax cuts. Coincidentally, this shift occurred alongside a substantial increase in minority voting.

That’s relevant because, contrary to the conventional wisdom among some on the left, Trump’s support among NC whites — including ones that shifted from Obama to Trump — was primarily driven by cultural issues, racial resentment and sexism. It had far less to do with economic issues, with messaging or with trade, let alone lack of campaigning in Wisconsin.

In fact, the Democratic/Republican divide in 2016 was primarily on education, not income — and this divide more or less disappeared when accounting for racial resentment and sexism. When viewed through that lens, a key reason for the shift of Obama NC whites to Trump becomes clearer, as it started after 2012 due to opposition to Obama’s policies on police shootings and Black Lives Matter, ISIS, and immigrants and refugees.

These issues were amplified by Trump in a major way, with his myriad lies, to emphasize white nationalist tropes that drew many NC white voters strongly to him.

10) Tesler pointed out that the SAME voters became more R from 2012 to 2016 if they had more racial resentment https://t.co/36EEIyBCZm pic.twitter.com/h6yf5KU9DD

Meanwhile, CE whites had started shifting towards Democrats noticeably after 2012. For example, Obama lost Ossoff’s district by 23 percent to Romney, while Clinton lost it by just 1.5 percent, highlighting the absurdity of insisting that Democrats should only go after Obama/Trump voters.

An even bigger absurdity is the attack on Democrats for not pushing single payer healthcare in these historically Republican districts, just as others chided Democrats for wasting effort on voters they deemed too conservative.

The attacks on Ossoff also predictably ignored important factors out of his control. He was leading in almost every poll in the weeks prior to June 14th, when a horrific shooting at a Congressional baseball practice, severely injuring Republican Rep. Steve Scalise, occurred in Virginia. Polls showed a significant shift to Ossoff's opponent immediately after the incident. To some, this brought back nauseous memories of how the Electoral College flipped from Clinton to Trump due to former FBI Director James Comey’s unjustified and unprecedented intervention in the campaign in October 2016.

Where does all of this leave us? The reality is Democrats are substantially outperforming past elections even in districts where Trump did very well. This is occurring despite the fact that Trump’s net favorability nationwide is currently a few percentage points better than it was on Election Day in 2016.

2. The results are nevertheless consistent with a substantially blue-leaning environment. Enough that the House is "in play", at a minimum, pic.twitter.com/eLOEofh1LO

This indicates that the #resistance is working — and needs to continue. Democrats should reach out to all types of voters, including minorities.