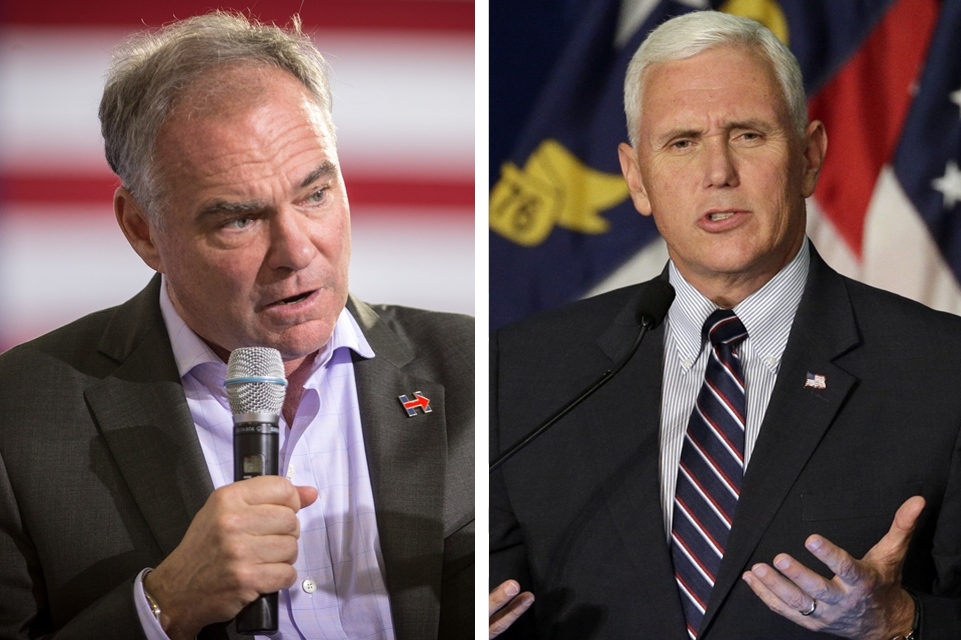 The coverage of the presidential election is concentrated on the nominees at the top of the tickets. But it's important to know the two men who are proverbially "one heartbeat away" from the presidency.

When Hillary Clinton first selected Tim Kaine as her running mate, I noted that Kaine is actually a nice guy, while Mike Pence just pretends to be one: "I don’t personally know either of these men. All I have by which to assess them is their records. I hear that both of them are nice, but only one of their records looks like one that seems to represent a legislator who cares about marginalized people. People like me."

I was reminded of this distinction once again when I saw Pence on Meet the Press saying Donald Trump, if elected, would suspend the Syrian refugee program because it "puts safety and security of the American people second to the agenda of the UN or to liberals in this country."

It's an issue on which Trump's running mate isn't merely parroting the policy of the ticket-topper. Pence is a true believer on closing the doors to Syrian refugees, currently locked in a court battle over the settlement of refugees in his home state of Indiana.

After U.S. District Judge Tonya Walton Pratt blocked Pence's order barring state agencies from providing resettlement assistance, his administration has continued to try to withhold money from groups aiding refugees in the state. Pence issued a blunt statement following Pratt's ruling in February: "My administration will continue to use every legal means available to suspend this program in Indiana unless and until federal officials take steps to ensure the safety and security of our citizens."

Then, as now, Pence continues to rely on the deeply dishonest premise that the federal government is not subjecting refugees to a sufficient screening process, despite the fact that "refugees undergo more rigorous screening than anyone else [allowed] into the United States."

Pence isn't a stupid man. It's not that he doesn't know the actual details of the refugee resettlement process—he's hoping you don't.

He's banking on the fact that if he, and his running mate, and lots of other members of their party, say often enough that the federal government isn't doing its job, people will believe them. And he's trading on years of Islamophobic fear-mongering and stereotyping that makes many people reflexively equate Syrian refugees with terrorists, instead of understanding that they are refugees because of terrorists driving them from their homes.

It couldn't be further from the approach taken by Tim Kaine, who, in his first speech after being selected by Clinton, asked how many people in his Miami audience were naturalized citizens. As hands were raised, Kaine told them: "Thank you for choosing us."

In five words, Kaine managed to convey the most fundamental difference between himself and Pence: One is a man who will defy a court order to keep refugees of war out of his state. The other is a man who will invite immigrants to identify themselves, just so he can thank them for making this country their home.

And then there is this: Speaking in Wilmington, North Carolina, Kaine told the audience: "The prospect of the emotionally volatile, fact-challenged, self-obsessed, and inexperienced Donald Trump as commander-in-chief scares me to death."

.@TimKaine: Thought of Trump as commander-in-chief "scares me to death" https://t.co/6VajhaPjZU

Pence does not share Kaine's eminently rational fear of a Trump presidency. He eagerly joined Trump's ticket, and is doing everything he can to elect someone who is, in every conceivable way, unfit for the job.

Thus revealing his own cavernous lack of judgment.

One of these men will be a heartbeat away from the presidency. The choice before us is Pence, a man who would turn his back on refugees, obsequiously supports Trump, and has built a career on being awful for women; or Kaine, a man who welcomes immigrants, isn't afraid to stand up to Trump, and campaigns in support of a historic woman candidate.

That shouldn't be a difficult choice at all.