Home National They're already trying to erase what they did to Hillary Clinton
Support progressive journalism.
Donate today 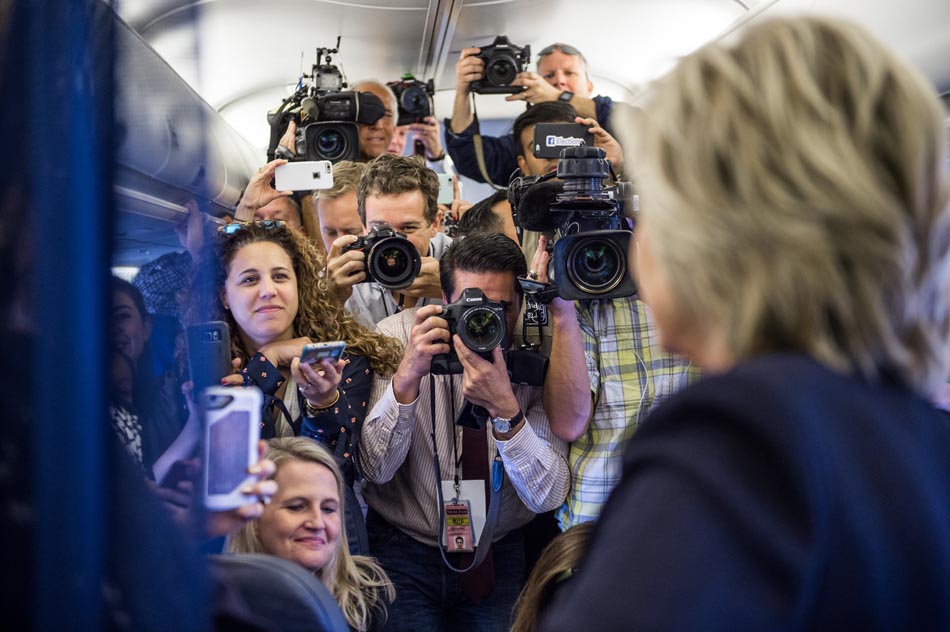 Some members of the press are beginning to reflect on their coverage of this presidential election and are finding it wanting. But they are only telling half the story. The easy half.

The pre-mortems of 2016 media coverage have begun. In the Washington Post, Dana Milbank takes the media — or certain members of the media, anyway — to task for being "lap dogs" who failed to "bark at Trump." The watchdogs, he says, "were outnumbered in this election by those who cover politics as horse race."

Animal metaphors aside, Milbank makes a strong case for the dereliction of duty committed by large swaths of the national press, who focused on optics and process instead of policy — and did so under the auspices of "objectivity" while "irresponsibly [giving] Trump unfiltered and uncritical coverage as he mounted his assaults on democracy and civility."

But what Milbank gets wrong — and what most pre- and post-mortems of media coverage will get wrong, too — is that uncritical and/or disproportionate Trump coverage is only half the story. The easy half.

The other half is the highly aggressive, sustained, and gender-biased coverage of Hillary Clinton.

It is easier for members of the media disposed toward self-reflection to confess to being caught up in the Trump frenzy. Milbank's colleague at the Post, Margaret Sullivan, also wrote a piece about what she described as the media's "Trump Addiction," urging her colleagues to break the habit after the election, which is a prime example of the sort of sheepish confessional that acknowledges only half the problem.

There has indeed been an outsized amount of favorable Trump coverage, and an abandonment of critical analysis under the auspices of "balance." But there has also been widespread hostility in the press toward Clinton — and it is much more difficult, apparently, to admit one's role in that.

Understandably so, when one deep-dives into just how antagonistic the media have been to the nation's first major-party woman nominee. It would be bad enough if it had only been unjustifiably sustained criticism of Clinton, or only been endemic indifference to Clinton rolling out solid policy as Trump tried to drag her into the mud, or only been profile after profile of Trump voters played against the erroneous narrative of insufficient enthusiasm for Clinton, or only one of dozens of other demonstrable inequities in coverage.

Any one of those would warrant necessary self-reflection on the media's failures during this cycle — but it was much, much worse than that.

Clinton has been subjected to a level of scrutiny so relentless and intense that it was somehow, incredibly, acceptable for the paper of record to publish a "news" article inviting “body language experts” to assess the authenticity of her gestures — and to report that they found her to be “dishonest” even in her very mannerisms.

Clinton was also subjected to being asked, over and over, why people do not like her. A demeaning question for a historic candidate who resoundingly won her primary and was leading the race for the White House, running against an opponent who has engaged in rank bigotry and boasted about sexually assaulting women. But somehow, astonishingly, it was not he who was repeatedly asked why he is not better liked.

Coverage of Clinton included panels of talking heads convened to discuss her voice, her laugh, whether she smiles enough — or too much. To admonish her for “shouting.” To talk about her hair, her clothes, her accessories. To sneer at her jokes and disdainfully disqualify any personal tidbit she shares as “pandering” and “cynical” and a desperate, pathetic attempt to connect to voters. To openly laugh at anything she does that reveals her humanity.

Coverage of Clinton also included playing ad infinitum on cable news, and endlessly recounting in written pieces, gendered attacks on her made by Trump, his staff, his surrogates, and his supporters — without meaningful analysis of its gendered nature. Her opponent literally sneered "such a nasty woman" at her during a presidential debate, and the quality of the media analysis barely rose above laughably apparent observations that it probably will not play well with female voters.

No man in her position, including her contemptible opponent, has been subjected to anything like the level of harassment and dehumanization masquerading as political coverage that Clinton has been.

And no voters have been so routinely and thoroughly ignored as her supporters, in service to a demeaning narrative about "low enthusiasm" for her candidacy.

We have been obliged to read countless thinkpieces about "the Trump voter," admonishing us to extend empathy to them; exhorting Clinton herself to reach out to them; condescendingly explaining that they feel alienated and forgotten — even as many of them attack us and the media pretend we do not exist.

The colossal imbalance of the coverage of the candidates in this election is absolutely worth exploring, especially by members of the media who facilitated that imbalance. But the exploration will be worth nothing at all if it excludes accountability for the dreadful coverage of Clinton.