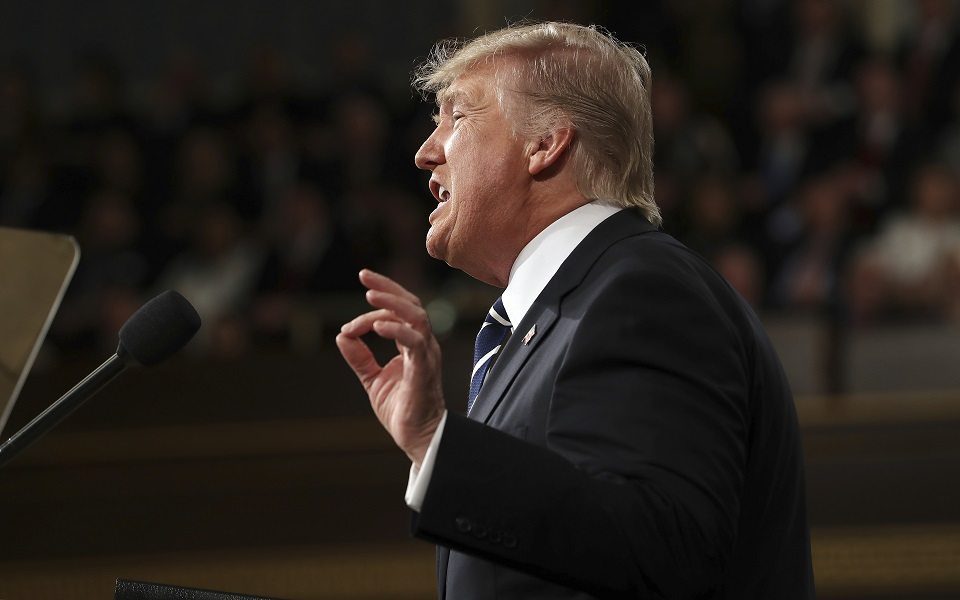 Donald Trump's address to a joint session of Congress is benefiting from ultra-low media expectations, but there was one moment that arguably eclipsed all of the speech's other failures for its sheer and unadulterated racism, and it deserves to be called out.

Democrats approached Donald Trump's first address to Congreess with dignified resistance, inviting guests who highlight the integral nature of immigrants and refugees to the fabric of American life, and largely expressing resistance through silence and symbolism.

But there was one moment during the speech that was so shocking that it drew audible gasps and murmurs from Democrats in the crowd. After drawing bipartisan applause with praise for law enforcement, Trump announced support for "victims of crime," but with a racist twist:

And we must support the victims of crime. I have ordered the Department of Homeland Security to create an office to serve American victims. The office is called VOICE: Victims of Immigration Crime Engagement.

We are providing a voice to those who have been ignored by our media and silenced by special interests.

Setting aside the forced and Orwellian acronym, this announcement was a naked and cruel policy embodiment of the racist premise that kicked off Trump's campaign to begin with. Although the office itself will likely deal only with crimes by undocumented immigrants (as outlined in Trump's executive order), the name itself notably demonizes all immigrants.

Moreover, there already exists a federal agency to assist victims of crime, demonstrating that the only purpose of VOICE is to amplify the demonization of immigrants, particularly Muslims and Mexicans.

It is especially cruel in the context of an administration that has yet to offer any plan, and only late lip service, to the victims of anti-Semitic and anti-immigrant attacks by whites. The new office also, by singling out victims of crime by immigrants, necessarily and cruelly excludes other crime victims, such as those of acts of violence by U.S.-born criminals.

Historian Michael Beschloss confirmed that this, like so much of Trump's presidency, is not normal:

MADDOW: This office, basically an office of immigrant crime. A Homeland Security office devoted to promoting the idea that immigrants are vicious, murdering, violent criminals, and wanting to promote that image. Is there anything like that in American history? Obviously, people are making references to history in other countries where they've done something like this, and those are not pretty comparisons. Have we done anything like this before?

BESCHLOSS: Nothing that I can think of immediately. And the other thing, Rachel, was that he put some of the victims, people who were said to have suffered from these crimes, in the visitors gallery. And I was thinking how far we have come from the time when Ronald Reagan sort of started this modern tradition of putting a hero in the visitors' gallery, which was Lenny Skutnik after that Air Florida disaster in 1982, all the way to, you know, putting people in the gallery to illustrate this presumed threat to the public good.

The history to which Maddow is referring is that of Nazi Germany, which published lists of crimes by Jewish people.

Trump's copious lies ought to be enough to dispel any thought that this speech was "presidential," but this disgraceful moment alone destroys that notion. If Donald Trump acted like a president Tuesday night, it was not of a country like America.