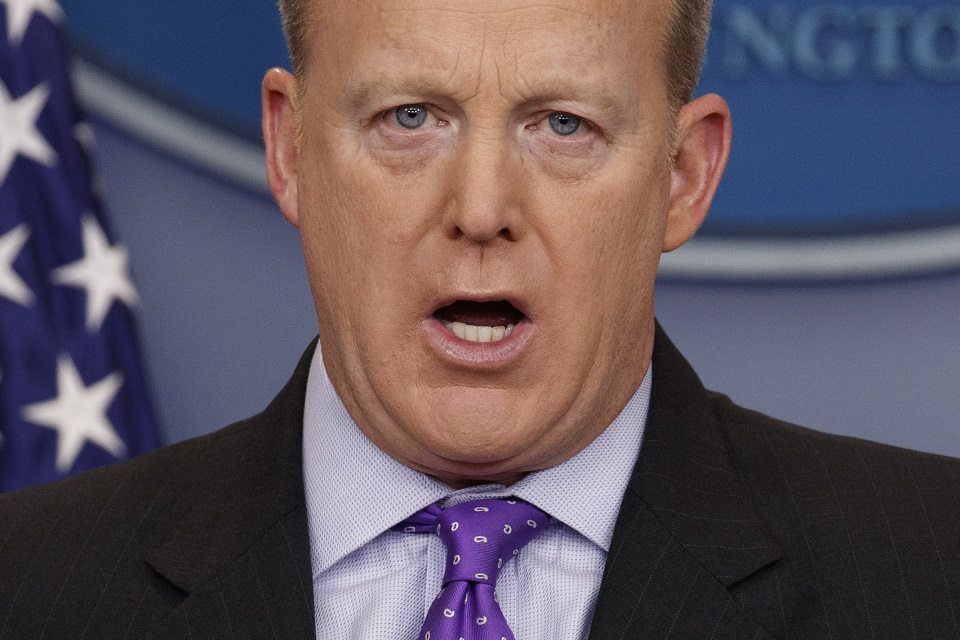 At a recent White House press briefing, press secretary Sean Spicer dodged ethics questions about Donald Trump and senior White House official Ivanka Trump by referring reporters to The Trump Organization. This is the second time he has done so.

In fact, a review of White House briefings dating back to the start of the Obama administration in 2009 shows use of the phrase "I refer you to ..." in 449 transcripts. In 445 of those instances, the spokesperson was referring reporters to a government agency, usually the State Department; to previous remarks by a White House official; or, in a handful of cases, to a political campaign.

Obama White House press secretary Robert Gibbs once referred reporters to BP for additional information on their efforts to stop the Deepwater Horizon spill, and another time, Jay Carney jokingly referred questions to Google when a reporter asked him "Can you explain exactly what Google+ is?"

Then along came Donald Trump.

REPORTER: Looking at — there are three open patents with the Philippines government, one from Trump trying to get Trump patented to — from Ivanka Trump for her clothing line. How do you respond to concerns about potential conflicts of interest with the leader of the Philippines?

MR. SPICER: I think the President and Ivanka have done everything in compliance. Made it very clear. And I would refer you to the Trump Organization.

The first part of that sentence is meaningless gibberish, as Spicer gets halfway through it and realizes he can't point to anything that Trump has complied with, or made very clear. His pivot to The Trump Organization really is Spicer's only refuge.

This would be unprecedented if Spicer had not, in fact, done it once before. In March, Spicer was asked about Trump's apparent violation of his murky and meaningless promises to separate himself from the business, and again deflected to The Trump Organization:

REPORTER: Eric Trump gave an interview a few days ago to Forbes Magazine in which he said that he would update his father regularly, perhaps quarterly, on the business, including giving profitability reports. So I had two questions about that. One is, have they spoken about the business since January? And two, how does this not violate what the President set out as the protocols for how he would deal with the business?

SPICER: Well, two things. I don’t know if they’ve spoken. It’s not — this may be a question better directed to the Trump organization. But secondly, I think everything that he’s done is in accordance with what the Counsel’s Office and the ethics folks—

REPORTER: Just following up, I believe he said the he wasn’t going to talk to his children, his sons, about the business. So how is that—

SPICER: Again, I think everything that is being done in terms of reports or updates is being done in a consultation with the counsel’s office. So I think that’s — Justin? [calling on another reporter]

That look from reporter Anita Kumar says it all. The spokesman for the executive branch of our entire government just told her that he cannot say whether the president has spoken with the decision-maker at a business that he is ethically compelled to separate himself from, and suggests she ask a completely unaccountable private corporation for information about the president's activities.

Like so much about Trump's presidency, this is not normal. That a White House spokesman repeatedly refers reporters to The Trump Organization for questions about the president's activities is, itself, evidence of these harmful conflicts of interests. It is time for journalists to stop accepting this, and demand answers from the person whose job it is to give them.