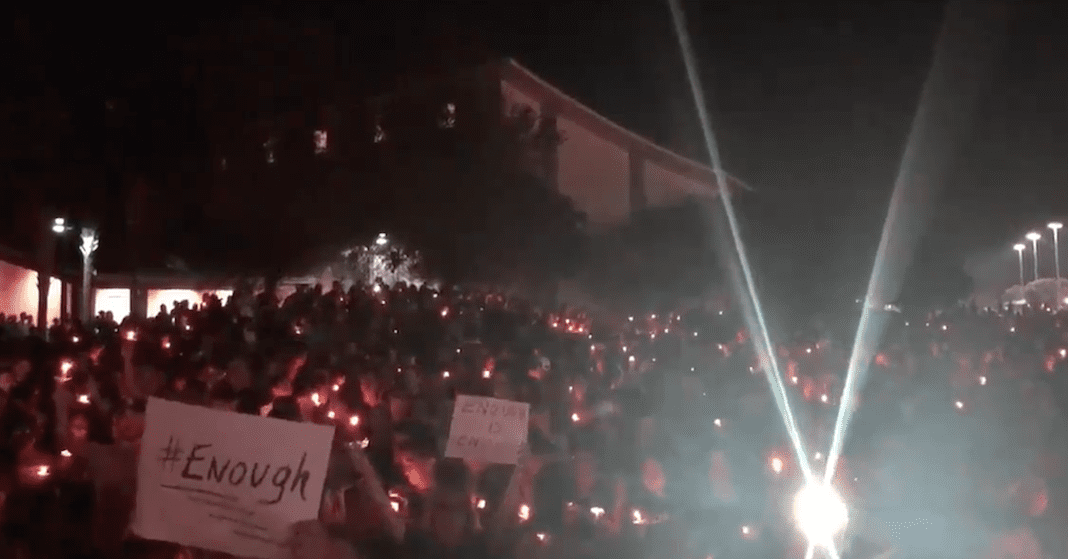 Republicans may be silent, but residents of Parkland, Florida are making their voices heard.

A day after 17 students and teachers were gunned down at at Marjory Stoneman Douglas High School in Parkland, Florida, thousands of community members gathered for a candlelight vigil to remember the victims of the massacre and make their voices heard in the ongoing gun control debate.

The event was held at Pine Trails Park amphitheater, where 17 ornamental angels lined the stage — one for each victim of Wednesday's shooting. The angels, which were lent to the city from the nearby town of Sunrise, Florida, were the same ones used to honor the victims of the Sandy Hook Elementary School shooting in Newtown, Connecticut.

The names of the 17 victims were read aloud at the vigil, where attendees could be seen carrying signs demanding action on gun violence and decrying the National Rifle Association for obstructing meaningful legislation to stop the carnage.

Vigil for #ParklandSchoolShooting underway. There is easily a crowd of thousands here that goes back as far as the eye can see. pic.twitter.com/AAlXpIMMQj

At one point, the crowd of thousands spontaneously erupted into chants of "no more guns."

Ryan Servaites, a student who attended the vigil after losing four friends in the shooting Wednesday, said his school had done everything it could to train for an active shooter incident — but preparation didn't stop it from happening, and it didn't save the victims.

"The system we are in right now is the problem," Servaites said. "We were trained as much as possible. This is a legislative issue. We need to fix it."

While Republicans are still going the route of silence and inaction, the residents of Parkland are sending a clear message to lawmakers: The time to discuss gun violence prevention is now — and if Republicans aren't going to do it, community members will.