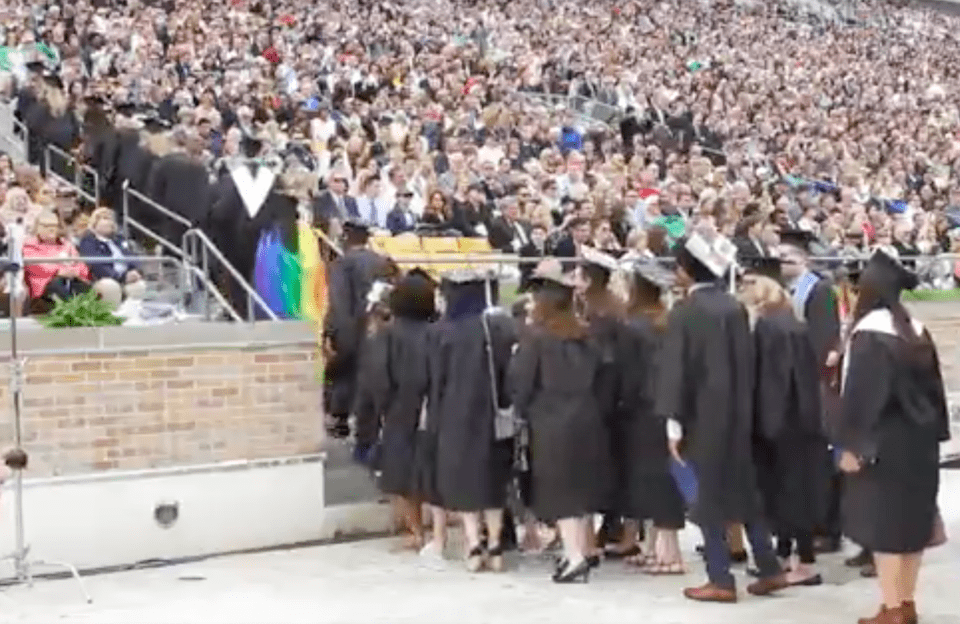 South Bend Tribune
Get The American Independent in your inbox

Vice President Mike Pence's scheduled commencement address at the University of Notre Dame was met with a sizable protest by graduates, many of whom walked out en masse as Pence was being introduced.

Vice President Mike Pence delivered a pair of commencement addresses this weekend, both of which drew powerful protests.

Pence's speech to small Christian school Grove City College was met with demonstrations outside the event. And his address to the University of Notre Dame drew protests from without and within.

Pence's appearance at the commencement drew throngs of protesters outside the campus, and spurred a sizable walkout by graduates. A seemingly endless parade of Notre Dame students began to file out of the stadium as soon as Pence was introduced:

The planned walkout was a highly visible protest, not just of Pence, but of the administration which he represents. The organizers of the protest cited Pence's own political positions, as well as Trump administration policies, as reasons for the walkout:

"The participation and degree-conferring of VP Pence stand as an endorsement of policies and actions which directly contradict Catholic social teachings and values and target vulnerable members of the University's community," Notre Dame student Xitlaly Estrada of WeStandforND said in a release.

The group cited the vice president's opposition to gay rights, his attempts as governor to stop Syrian refugees from entering the state, his backing of President Trump's travel ban on immigrants from seven majority-Muslim countries, and his opposition to sanctuary cities that refuse to enforce federal immigration laws.

The Trump administration and these colleges may not be setting much of an example for their students, but the students are picking up the slack by demonstrating what it means to stand up for what is right.