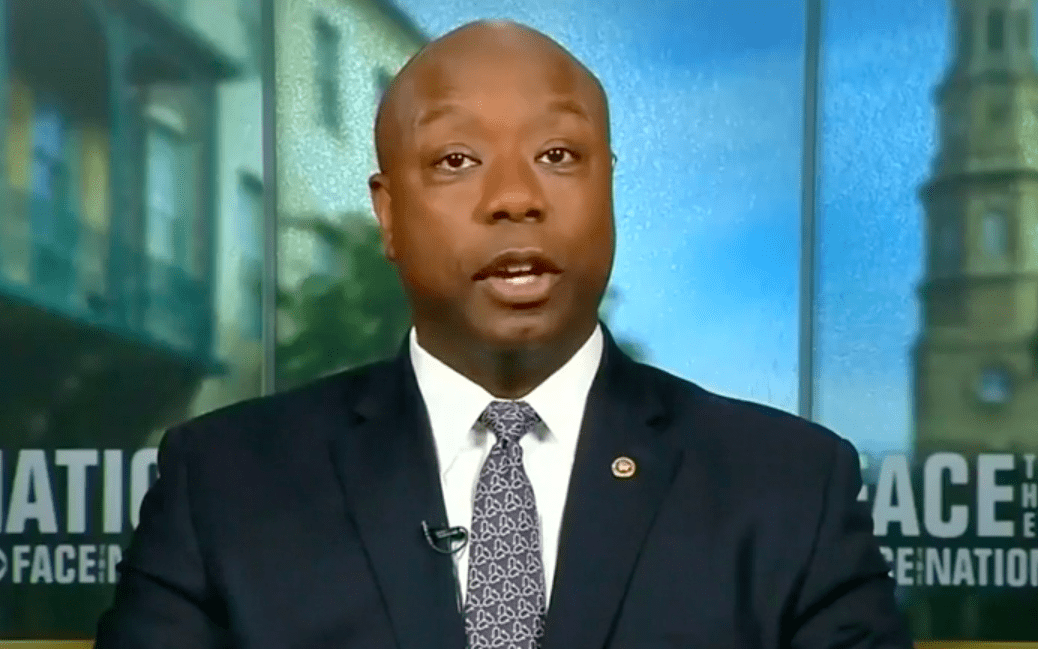 Sen. Tim Scott (R-SC) struggled to explain why he's the only Republican who has co-sponsored a bill that would make lynching a federal hate crime.

One year after Trump said there were "very fine people" among the white supremacist rioters in Charlottesville, almost every Republican in the Senate has failed to sign on to a bill that would make lynching a federal hate crime.

On Sunday morning's edition of "Face the Nation," host Margaret Brennan asked Sen. Tim Scott (R-SC), the only black Republican serving in the Senate, why he is the only senator in his party to co-sponsor the anti-lynching bill.

Scott, along with Kamala Harris (D-CA) and Cory Booker (D-NJ), introduced the bill together 45 days ago in late June. The three lawmakers are the only African Americans in the Senate.

"Well I think I'm the first Republican," Scott replied. "By the time we get this out of the Senate there will be several Republicans, and there are some Democrats as well."

"There are 26 co-sponsors, including yourself. They're all Democrats," Brennan pointed out. "You're the only Republican."

"Well, sometimes it's good to be first," Scott said, adding that he will keep "looking for ways to bring more folks on board."

But when Brennan asked Sen. Scott if he thought he could actually deliver Republican votes for the anti-lynching bill, Scott hesitated.

Scott added that he thinks the publicity from his interview with Brennan "will actually bring more Republicans on board by the time we're finished than I did before we started."

Scott could be correct that at least one or two Republicans might be shamed into signing on to the bill after seeing his appearance.

But after 45 days and national news coverage, not a single Republican has yet joined Sen. Scott in signing on to the bill.

That's a stark difference from 2005, when 43 out of 55 Republican senators joined every Democrat in co-sponsoring a weaker resolution apologizing for the Senate's failure to pass anti-lynching laws.

But since then, Trump's emergence has made it not only more acceptable, but even a political necessity, for Republicans to cater to a racist base in order to maintain power.

If they had any decency, Senate Republicans would have already flocked to sign on to a bill protecting Americans from white supremacist terror. But it seems they are more interested in siding with Trump and his racist agenda.