Home National To be Black in America is to be afraid
Support progressive journalism.
Donate today 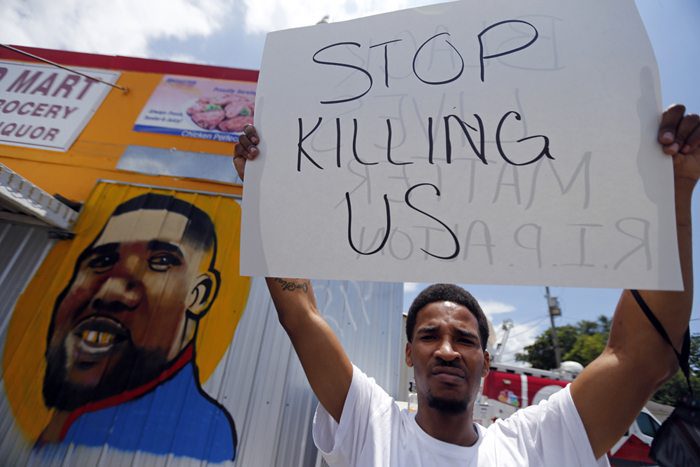 To be Black in America is to be afraid. And to live in a constant state of fear that you may be killed by police is fundamentally incompatible with what are meant to be unalienable rights enjoyed by every American: Life, liberty, and the pursuit of happiness. True equality and justice are dependent on eliminating the fear that critically restricts what we are promised is the most basic part of American life.

Over the last few days, four more names have trended; four more Black citizens who have been killed by police violence or neglect. We name them, individually, because they are not mere statistics in a grim tally of police killings, lumped together to be demonized and discarded.

Keith Lamont Scott, 43, was fatally shot in Charlotte, NC, reportedly while reading a book in his car, waiting to pick up his son from the school bus.

Terence Crutcher, 40, was fatally shot in Tulsa, OK, videotaped by a circling police helicopter with his hands high in the air as he was approached by multiple officers with guns drawn after his car stalled.

Tyree King, 13, was fatally shot in Columbus, OH, while holding a B.B. gun.

Terrill Thomas, 38, died of dehydration in his cell after being denied water in a jail run by outspoken Milwaukee County Sheriff and vehement Trump supporter David Clarke.

The bloodshed continues, and Black people are tired.

The statistics on police violence are staggering, but I'm not going to detail them. Because like most Black people I know, I'm tired. And I'm afraid.

When I say I’m afraid, I’m not talking about that slight tension we all feel when we see a state trooper in our rearview mirror and reflexively glance at our speedometer to make sure we’re not over the speed limit.

America has already turned the great joy of being Black into being a stress.

On days like today, folks are over the edge.

To be black in America is to exist in haunting, mundane proximity to death at all moments. There is no reprieve, no mute, no block, no unfollow that can loosen us from its shadow. And yet, we must live. We must carry on as though nothing is wrong, as though video of our death is not both the trailer and feature film.

But something is wrong.

As a Black parent, I, like all of my other Black friends, have had “the talk” with my child. “The talk,” a conversation with a Black child that they risk being targeted by police, has become so ubiquitous that the New York Times covered it with a video, and accompanying text asking: "How should parents impart this information, while maintaining their child’s pride and sense of self? How does one teach a child to face dangerous racism and ask him to emerge unscathed?"

Our lives are filled with stories, and deeply troubling videos, of Black citizens who were killed by police. And they are filled with stories of near misses, like the well-publicized assault of UVa student Martese Johnson, whose interaction with police so easily could have turned deadly without the intervention of Martese’s white friends who witnessed it.

But we don't even need to point to Martese to justify our fear to our kids. We all have so many examples of kids (and parents) we know being harassed or singled out by police, even while out with white friends, that the possibility that our kids (or their parents) will die is more than a theoretical notion from the headlines.

Between the headlines and “the talks” and our own lived experiences, fear of police violence is now ingrained in our kids. They now share our fear.

During a cross-country road trip last year with my daughter and a (white) friend of mine from high school, we were pulled over by a state trooper on a two-lane stretch in west Texas. I'd been too engrossed in catching up with my friend to notice the speed limit had dropped as we approached a small town. The trooper let me away with a warning.

Later that night, my New York-native teen, born into this latest iteration of our centuries of fear and terror on this continent, asked me, without any sense of irony or humor, “Mom, do you think that officer would have been so nice to us if there hadn’t been a white lady in the car with us?”

It grieves me that we have to share this fear. But it is real and present in our daily lives. Especially with the prospect of a potential president who outspokenly promotes white nationalism and mainstreams an alt-right agenda that not only supports but advocates the snuffing of Black lives in the name of “law and order.” His very candidacy has inspired terror in children of color.

Our fear, however, cannot protect us. Despite the outpouring of "helpful" advice from onlookers admonishing us to behave differently or live somewhere else or wear our hair differently or change any one of dozens of things that are supposed to make it Black citizens' fault when we are killed by police, individual people cannot overcome systemic prejudices and institutional failures.

We are having "the talk" with our kids, but what we need is for white people to start having "a talk" with one another, especially those in positions of power. To that end, Hillary Clinton said yesterday:

“This horrible shooting—again. How many times do we have to see this in our country? In Tulsa? An unarmed man? With his hands in the air? I mean, this is just unbearable, and it needs to be intolerable.

“You know, maybe I can, by speaking directly to white people, say, ‘Look, this is not who we are.’ We’ve got to do everything possible to improve policing, to go right at implicit bias,” Clinton said. “There are good, honorable, cool-headed police officers. … We can do better. We have got to rein in what is absolutely inexplicable, and we’ve got to have law enforcement respect communities and communities respect law enforcement because they have to work together.”

We must move forward―and quickly. Black lives depend on it.

Black liberty and the pursuit of happiness depend on it, too. If we are to be truly equal and truly free, we cannot live lives that are made smaller by fear.