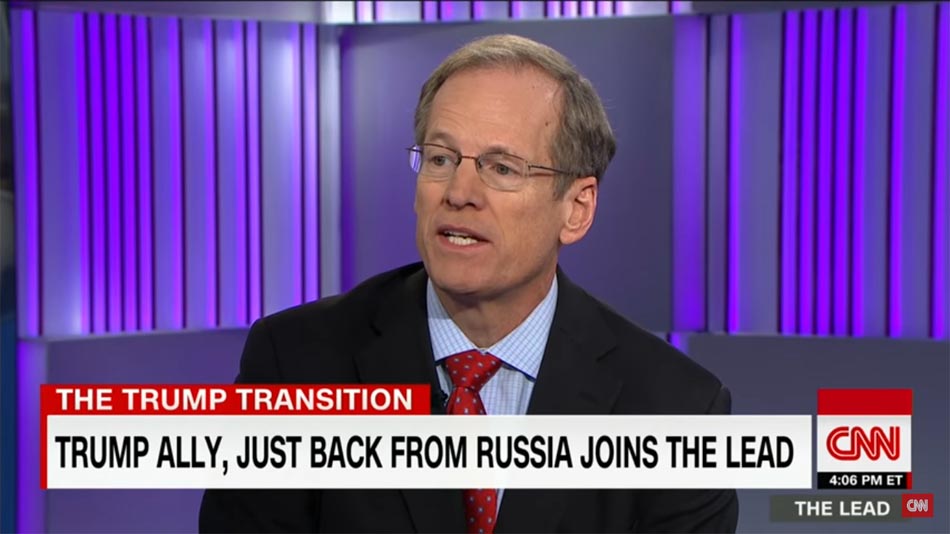 Adding to the growing morass of troubling connections between the incoming administration and Russia under Vladimir Putin, two advisors to President-elect Donald Trump took newsworthy trips to Moscow.

Well in advance of Donald Trump taking office as President, two of his supposedly "former" top advisors have made overlapping trips to Moscow this past week that appear to telegraph the incoming administration's foreign and economic policy plans.

On December 8th, the Russian propaganda outlet Sputnik News reported Carter Page had arrived in Moscow to hold talks with business people and "thought leaders." As Sputnik noted, "thought leaders" is a broad, murky term that "may include government officials or people close to the establishment."

During his visit to Moscow, Page made a speech broadcast by the Russian state media outlet Russia Today in which he did two things of note: First, he announced that ExxonMobil CEO Rex Tillerson was going to be Trump's nominee for Secretary of State, before Trump announced it himself to the American public. Page even included a slide labeled "First Secretaries of State for New U.S. Presidents," comparing Tillerson to Hillary and Bill Clinton: Second, Page agreed with speculation posed by a questioner that election hacking allegations might be a "false flag" perpetrated by the United States against the government of Russia, rather than the act of aggression and interference by Russia upon the United States that 17 U.S. intelligence agencies agree they are:

U.S. government might have deliberately orchestrated cyberattacks to make it look as though they were coming from Russia, Carter Page says.

The day after Page made this accusation against the U.S. government, the Russian Foreign Ministry reportedly began repeating the assertion as a talking point:

According to Kellyanne Conway, Trump's senior advisor, Page left the Trump campaign months ago and was no longer an official part of Trump’s advisory team following reports criticizing Page’s close ties to Russian interests. This week, Page claimed he is "not directly involved in the transition" but admits he has "talked to various people" about events related to the Trump administration.

Another reportedly "former" advisor to Trump also made a visit to Moscow this week. Former Georgia Republican Congressman Jack Kingston announced he was "on location" in Moscow via his Twitter account on December 10th by joking, "there was a time that we worried about KBG [sic] now it’s just hackers":

On location- there was a time that we worried about KBG now it's just hackers. pic.twitter.com/LA85VVJFrp

The website of the American Chamber of Commerce in Moscow describes Kingston as a "Senior advisor to President-Elect Donald Trump during the campaign" and describes his relationship with team members as "extensive," including decades-long relationships with Conway, Newt Gingrich, and Vice President-elect Mike Pence.

While in Moscow, Kingston gave a speech to the American Chamber of Commerce in Moscow on December 12th about the "challenges and opportunities" of doing business with the U.S. under a Trump administration. And apparently in response to a question about U.S. sanctions against Russia, Kingston told the American outlet NPR, "Trump can look at sanctions. They’ve been in place long enough. Has the desired result been reached? He doesn’t have to abide by the Obama foreign policy. That gives him a fresh start."

Sanctions were first put in place by the U.S. in 2014 following Russia’s invasion and annexation of Ukraine’s Crimean peninsula. Trump has previously indicated his willingness to recognize Ukraine’s Crimea as Russian territory and to lift the sanctions.

Notably, those sanctions against Russia are interfering with a deal between ExxonMobil and Russia’s oil giant Rosneft and are reportedly costing ExxonMobil — helmed by the current nominee for Secretary of State — $1 billion in potential revenue. In 2013, Russian President Vladimir Putin awarded Tillerson the Order of Friendship medal, its highest honor for foreign nationals. If Tillerson is confirmed by the Senate and fills the position, he will be in a position to lift the sanctions.

It is unclear if or how these likely foreign and economic policy changes under the incoming Trump administration will benefit American interests and national security.

But it is certainly becoming more apparent every day how they will benefit Trump and his cronies.