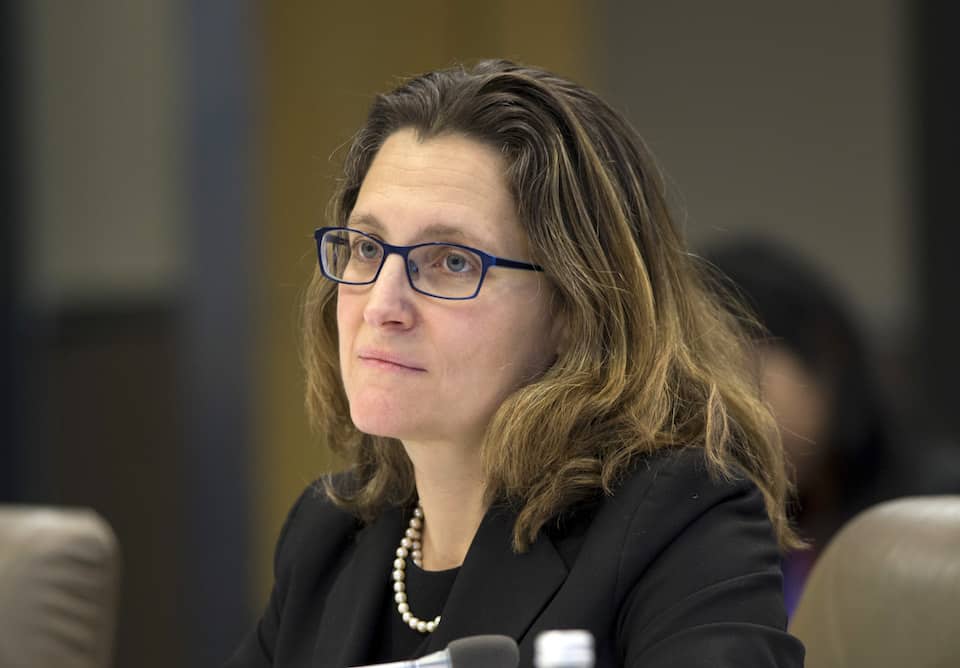 (AP Photo/SNPA, David Rowland)
Get The American Independent in your inbox

Canada's foreign minister, Chrystia Freeland, issued a strong rebuke to Donald Trump over his continued policy of alienating our allies and his destructive posture on the world stage.

Donald Trump's blundering approach to foreign policy has alienated allies around the world, rupturing bonds built over decades of unity.

His decision to pull out of the Paris climate accord has provoked another strong rebuke from a world leader, this time from Canada.

Describing America as "the indispensable nation" and thanking the country for its "unique, seven-decades-long contribution to our shared peace ‎and prosperity," Freeland described Trump's election as "a desire to shrug off the burden of world leadership."

"The fact that our friend and ally has come to question the very worth of its mantle of global leadership, puts into sharper focus the need for the rest of us to set our own clear and sovereign course," she stated.

And she added that, unlike the United States under Trump, Canada would not reject international alliances, and would continue to "work with other like-minded people and countries who share our aims."

Freeland's message echoed that of another U.S. ally, Germany, after Trump attacked NATO and refused to publicly recommit to the organization's principle of mutual defense. Trump also referred to Germany as "very evil" over their auto manufacturing and trade policies.

After meeting with Trump, German Chancellor Angela Merkel told a Munich audience, "The times when we could completely rely on others are, to an extent, over." She added, "we need to know that we have to fight for our own future and destiny as Europeans." Her words reflected an unusual distancing between the United States and Germany, who have been allies since the post-World War II era.

Trump's decision to pull America out of the agreement is widely unpopular. A new poll from ABC/Washington Post found that 59 percent oppose the decision, while only 28 percent support it. Poll respondents also did not believe Trump's allegation that leaving the alliance would help the American economy, with only 32 percent backing his position.

Former President Barack Obama characterized the decision as "the absence of American leadership" and much of the entire world agreed. Trump was slammed for his position by multiple world leaders — including the leaders of France, Germany, and Italy — as well as by businesses like Apple and General Electric, and by millions of American citizens.

Trump continues to isolate America. And world leaders continue to respond with derision and with recognition that they may no longer be able to count on us, as they have for so long.