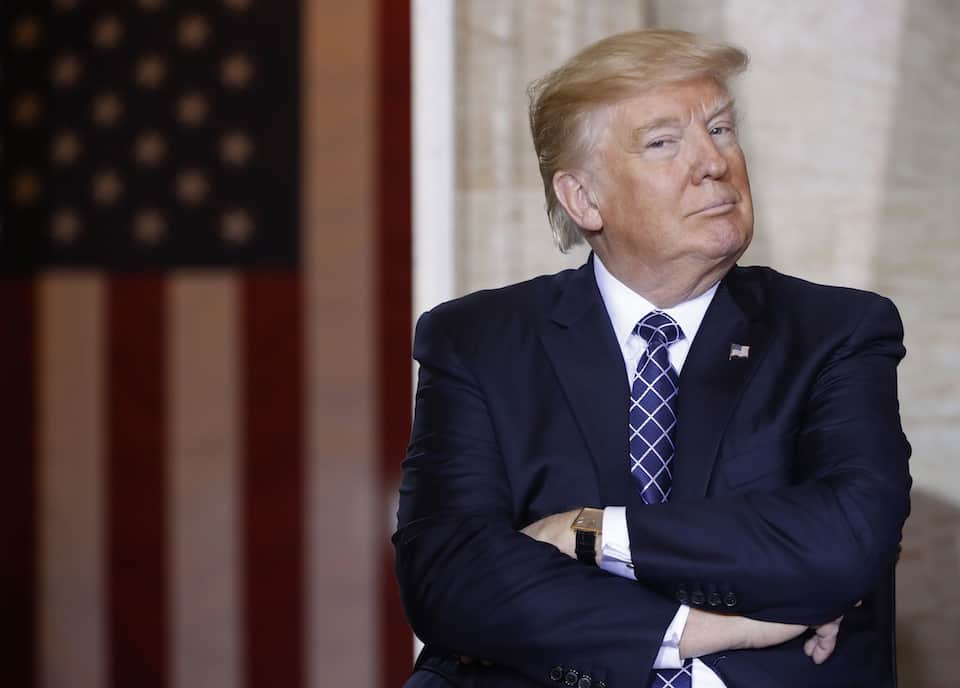 With the coverup unraveling, fears mount that Donald Trump will take extreme action to protect his family.

As the fast-moving Russia scandal escalates and the White House’s attempted coverup continues to unravel, fears are mounting that Donald Trump will take extraordinary action to protect the players involved, including his son and son-in-law who last year attended a meeting with a “Russian government” attorney in hopes of collecting dirt on Hillary Clinton.

That revelation has exploded the scandal narrative, shifting the focus from whether Trump’s team tried to collude with Russians last year — they clearly did — to what exceptional action might Trump take when confronted with a scandal that poses real legal danger for his family.

For Sen. Mark Warner, the top Democrat on the Senate Intelligence Committee, the fear is that Trump will take unilateral action and pardon anyone involved in the collusion controversy.

“The possibility of presidential pardons in this process concerns me and also would be, I think, a really, really bad move,” Warner told Vox. “After the first couple of months, I thought this administration couldn’t surprise me. And I’ve been proven wrong time and again.”

Warner’s expressed fears comes as the White House’s Russia cover story continues to come unglued, with new questions being raised over who knew what and when inside the White House about Donald Trump Jr.’s meeting with the Russians, who inside the White House has now opened themselves up to legal jeopardy for helping Trump Jr. initially mislead the public about the meetings, and who’s going to pay for the mounting legal bills.

Specifically, there’s a “robust” debate about whether the Republican National Committee should cover the costs for Trump and his family, according to the Washington Post. But RNC legal defense funds are usually spent on behalf of an action taken by the organization, such as an election recount, and it’s not clear if the money will be spent to protect a White House in coverup mode.

The more pressing question for the White House revolves around the timeline initially set forward to try to dismiss the New York Times scoop about the June 2016 meeting between Trump’s top campaign advisers and the Russian attorney promising to help the Republican’s campaign. The meeting was confirmed by a chain of emails that made it clear the Russian government wanted to help Trump defeat Clinton.

“President Trump’s legal team was informed more than three weeks ago about the email chain arranging a June 2016 meeting between his son Donald Jr. and a Kremlin-connected lawyer,” Yahoo News now reports.

Earlier in the week, White House press secretary Sarah Huckabee Sanders said Trump had only learned about his son's meeting "in the last couple of days." Yet his attorneys in charge of dealing with the Russia scandal found out about it nearly a month ago and never told him?

Richard Painter, the former chief ethics lawyer for President George W. Bush, told Yahoo News that the White House story doesn’t make sense, insisting it would be “unbelievable” for Trump’s lawyers not to have informed him about that key development.

Additionally, CNN reports that it was Jared Kushner’s attorneys who first discovered the email chain setting up the 2016 meeting with the Russian attorney, and that Kushner himself was going to tell Trump about it:

Kushner knew of the newly discovered email by mid-June and told his lawyers he planned to sit down with the President to discuss the meeting and the email that had been discovered.

On Friday morning, NBC News reported that the Russian attorney who met with Trump’s top advisers last year was accompanied “by a Russian-American lobbyist — a former Soviet counter intelligence officer who is suspected by some U.S. officials of having ongoing ties to Russian intelligence.”

One week ago, while attending the G20 summit in Europe, and after meeting with Russian President Vladimir Putin, Trump announced it was “time to move forward” from the Russia controversy.

That’s simply not going to happen.