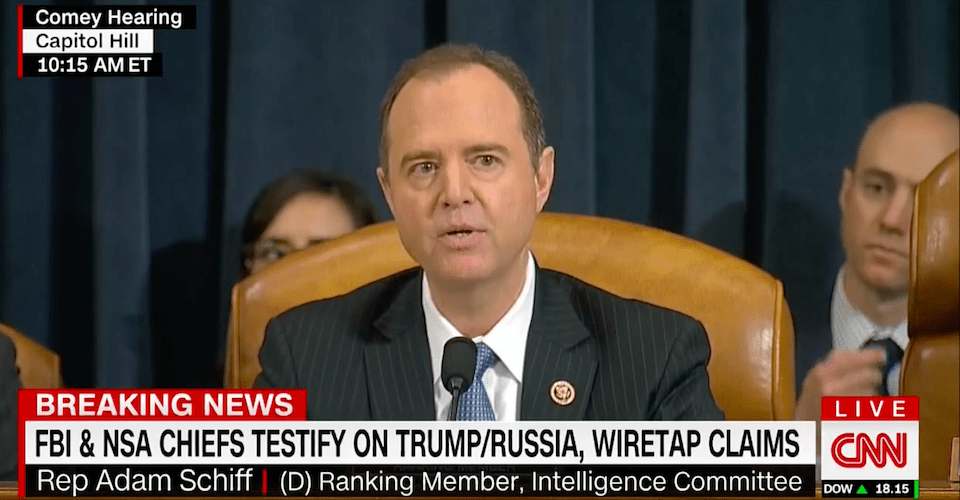 House Intelligence Committee Ranking Member Adam Schiff (D-CA) opened the committee's hearing on the "Russian Active Measures Investigation" by reading into the record a set of facts that partially corroborate the damning Steele dossier on Donald Trump's ties with Russia.

House Intelligence Committee Ranking Member Adam Schiff (D-CA) previewed the hearing at which FBI Director James Comey is testifying Monday by telling Meet the Press' Chuck Todd that there is "circumstantial evidence of collusion" between Donald Trump and Russia.

At the opening of the hearing, Schiff read much of that evidence into the record, including this passage in which he specifically cited facts that corroborate the now-infamous Steele dossier, noting that some of the policies predicted by the dossier "as recently as last week, have now presciently come to pass":

Moments later, Director Comey confirmed that the FBI is investigating the Trump/Russia collusion allegations, while cautioning that there are details he cannot discuss.

Fortunately, Schiff was able to drag the facts that we have been reporting on into the light — facts which will undoubtedly inform the direction of this investigation.