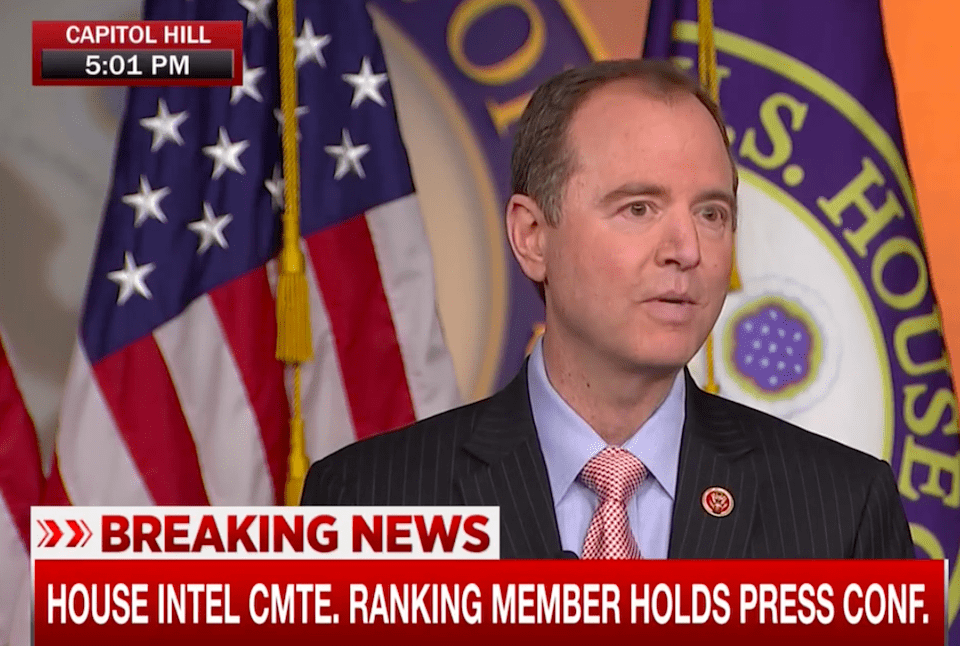 The top ranking Democrat on the House Intelligence Committee called out committee chairman and Trump transition official Rep. Devin Nunes for acting as a smokescreen for Donald Trump's lies about wiretapping, while the Congressional probe into Trump's campaign activities is ongoing.

Rep. Adam Schiff (D-CA), the ranking Democrat on the House Intelligence Committee, slammed Rep. Devin Nunes (R-CA), chairman of the committee, for his bizarre attempt to provide cover for Donald Trump and the ongoing investigation into Russian interference in the presidential election.

Schiff said that Nunes' behavior had raised "grave" concerns about the committee's ability to independently provide oversight of Trump, and that Nunes had to decide if he was going to act as a congressman or as a surrogate of the Trump administration, "because he cannot do both."

Despite Trump's claim that he was vindicated after Nunes' remarks at a press availability, Schiff said, "President Trump's claims that he was remain as baseless today as they were yesterday."

SCHIFF: He needs to decide whether he is the chairman of an independent investigation into conduct which includes allegations of potential coordination between the Trump campaign and the Russians. Or he is going to act as a surrogate of the White House, because he cannot do both.

And unfortunately, I think the actions of today throw great doubt into the ability of both the chairman and the committee to conduct the investigation the way it ought to be conducted. I have expressed these grave concerns with the chairman. I only learned about this the way that all of you did, when the chairman briefed the press in advance of briefing his own committee members. And that is a deep, deep problem. I think it does underscore the importance of establishing an independent commission, a body that is fully independent of any political considerations, including those that may emanate from the White House. That would certainly give me a lot of confidence that in addition to whatever work our committee does and the Senate Intelligence Committee does that there is a truly independent body that is looking into the grave issues that have been raised.

Second, with respect to the intercepts themselves that the chairman referenced, those have not been provided to the committee for evaluation, but on the basis of what the chairman has said and the basis of my conversation with the chairman, I can say this: There is still no evidence that the president was wiretapped by his predecessor. President Trump's claims that he was remain as baseless today as they were yesterday. And they were the day before where the directors of the FBI and NSA is testified that they were made without any basis in fact.

If the incident today is an indication that after making the baseless claim, the president then aggravated the damage by implicating the British in a potential plot to have the British surveil him on behalf of President Obama, and now is attempting to interfere in the congressional investigation, again with the effort of trying to provide some substance to acclaim without substance then the damage, the wrecking ball of this allegation has just claimed another victim, that being our own committee.

An independent investigation of Trump and Russia is sorely needed. Nunes' strange behavior does not change that fact, and Schiff is making clear that he is not buying the smokescreen that Nunes is throwing on behalf of Trump with any degree of seriousness.