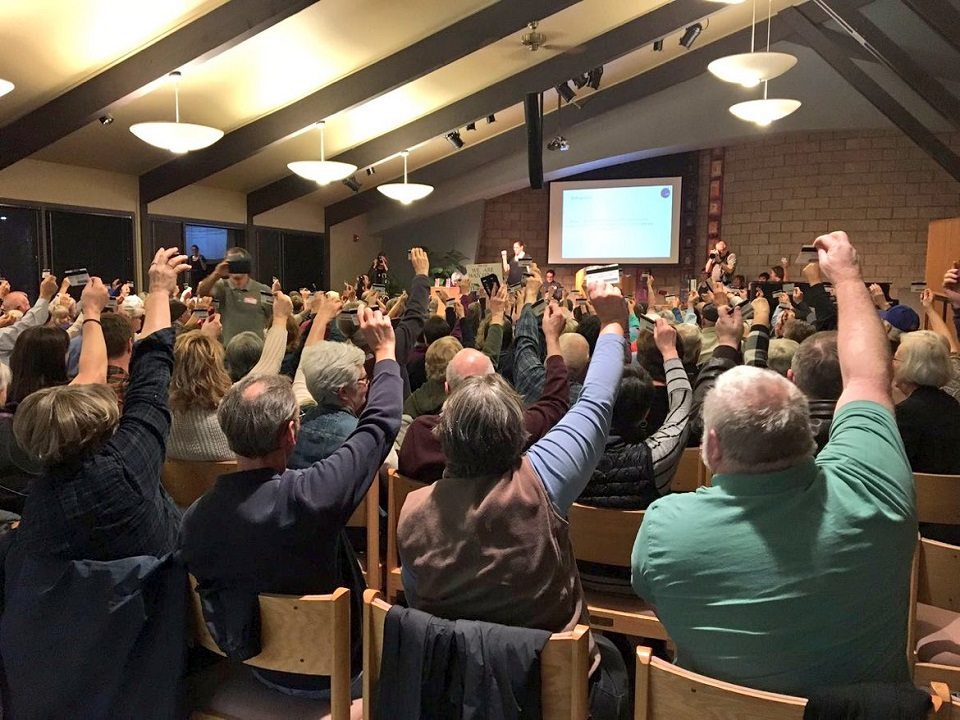 Kaivan Shroff
Get The American Independent in your inbox

Americans are showing up and speaking out at their elected representatives' town halls throughout the United States in opposition to Donald Trump and Republicans' plans to repeal the Affordable Care Act, deport immigrants, and ban refugees.

Instead of engaging with the concerns and complaints of the citizens they represent, Trump and Republicans have sought to characterize them as professional paid protesters, "so-called angry crowds," non-constituents brought into Republican-held districts.

Fox News and other right-wing media have been actively and repeatedly reinforcing these talking points, citing two of their favorite villains, George Soros and President Barack Obama, as being behind the movement. The Utah Republican Party even went so far as to describe falsely the town halls there as being violent and threatening, despite video evidence and journalist testimony to the contrary.

White House Press Secretary Sean Spicer attempted to add additional weight to the false characterizations at a recent press conference: "There is a bit of professional protester, manufactured-base in there," he said, providing no evidence. "Just because they’re loud, doesn’t necessarily mean that there are many."

To debunk these false characterizations, people at town halls are demonstrating that they are, in fact, constituents, in numerous heartening ways.

In Colorado, voters lifted up their state identifications:

At a town hall in in Colorado, citizens hold up their state IDs to prove to GOP that they are 100% real constituents pic.twitter.com/t2ABatcfJ4

In Virginia, constituents wore name tags with their zip codes:

In Arkansas, citizens simply told their senator where they lived:

Thank you Senator Cotton for being here today. First of all, I am Mary Story from Fayetteville, and I am not a paid protester. (crowd cheers and applauds)

Emotional moment— Ark. woman confronts Tom Cotton: "I have sent you one message after the other...not a word except a regular letter sent." pic.twitter.com/ihSXAOtpJo

CONSTITUENT: We’re going Medicare my way, not your way. My way. I’ve got a husband DYING and we can’t afford — let me tell you something. If you can get us better coverage than this, go for it. Let me tell you what we have, plus a lot of benefits that we need. We have $29 per month for my husband, can you beat that? Can you? With all the congestive heart failures and open heart surgeries? We’re trying. $29 per month, and he’s a hard worker. Now — $39 for me.

Here’s my question: I have sent you one message AFTER THE OTHER, sir, about our family. And you know where we live? I don’t live three hours from here. I don’t live two hours from here. I live just down the road a few places from your office. And I have invited you into our home. And not a word except a classic, regular letter sent. Now, here’s my question, yes or no: Will you come to my family’s home — I promise you it will be safe — sit down with the three of us and hear our stories from 1991 until now?

COTTON: So, so, ma’am, I’d be happy to sit down with you and hear more about your story. We’ve got staff here. (crowd yells “IN HER HOME”) Ma’am, we have, we’ll make a decision about where we meet, but I’m happy to meet with you.

As for the claims that those with concerns about GOP policies are not "many" and that protesters are only showing up in Republican-controlled districts, the crowds and locations speak for themselves.

Lines outside of Grassley town hall. Started at 7:45 am; half of crowd can't get in pic.twitter.com/jdu6bfUsCA

Room at full capacity for @BillCassidy's town hall near New Orleans. Roughly 200 people left outside who couldn't get in. pic.twitter.com/ZNdgCpr4Xs

Way to go @IndivisibleTeam #TX24! Our loud, proud and peaceful protest ft. on @CNN. @RepKenMarchant, can you hear us now? Host a Town Hall! pic.twitter.com/r9FNhTeR3y

Just to sample a few.

Approaching the Congressional recess, Republicans already seemed to anticipate backlash, with the majority of them refusing to hold town halls even as their Democratic peers scheduled local events. Now that the GOP pushback has failed to hold water, they'll need a new strategy to handle the crowds.