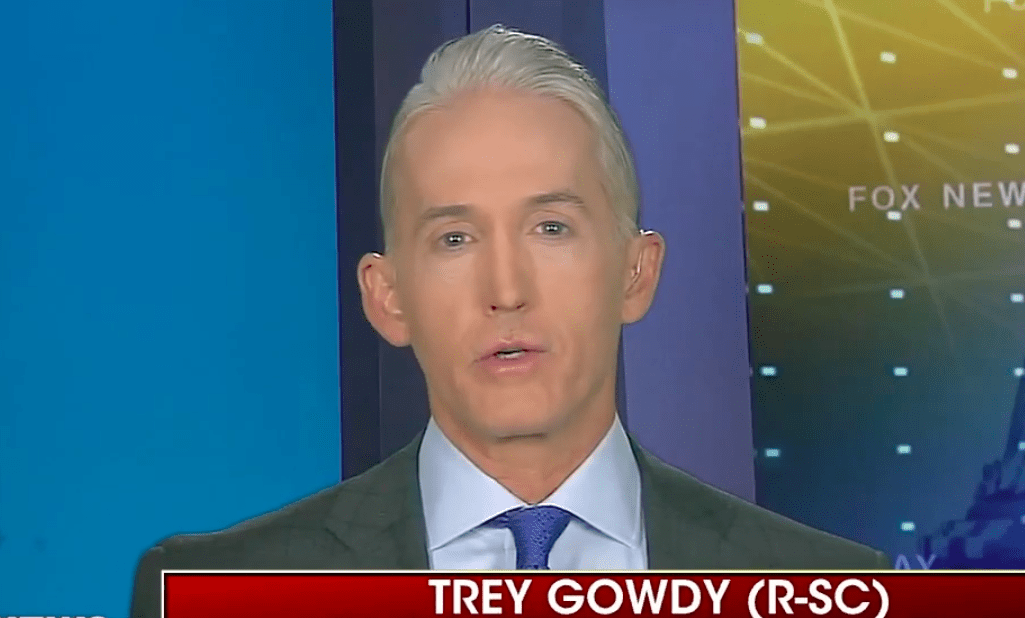 Trump's disastrous Russia summit has cost him dearly — and now, even one of the GOP's top attack dogs in Congress says Trump's top advisers should consider resigning if Trump doesn't change his tune about Russia.

On this week's edition of "Fox News Sunday," Rep. Trey Gowdy (R-SC) spent a good chunk of time defending Trump. But he was forced to change his tune and start criticizing Trump when the subject turned to Trump's consistent defense of Putin over Russia's criminal intrusion into the 2016 election.

Host Bret Baier began by asking Gowdy if he agrees with Rep. Will Hurd (R-TX) that Trump was "manipulated" by Putin.

Remarkably, Gowdy refused to even push back on that. "[Hurd] has a background as a CIA officer, I defer to him on manipulation," he said.

Gowdy continued by pointing out that "the president has access to every bit of evidence" — even more than Gowdy and other members of the House Intelligence Committee do.

"The evidence is overwhelming," Gowdy said. "It can be proven beyond any evidentiary burden that Russia is not our friend, and they tried to attack us in 2016. So the president either needs to rely on the people that he has chosen to advise him, or those advisers need to reevaluate whether or not they can serve in this administration."

Gowdy is hardly a "Never Trump" Republican. He went on to spend the balance of the interview falsely asserting that there's "no evidence of collusion" — even though it's now public record that Trump's top campaign officials attended a meeting whose purpose was to collude with the Russian government, and that Trump lied to cover it up.

But even Gowdy is being forced to recognize the depth of the disaster that is Trump's diplomacy with Putin.

Trump shocked even his most strident critics when he attacked Americans and sided with Putin against his own intelligence community during a press conference in Helsinki.

Then, the White House spent several days deciding whether or not it should hand American citizens over to Putin for interrogation, before reluctantly "disagreeing" with that proposal under tremendous public pressure.

The episode reached a humiliating peak Thursday when Director of National Intelligence Dan Coats was visibly shocked to learn, on live television, that Trump had invited Putin to the White House this fall.

So far, no one has resigned from the Trump administration over this disaster — which raises the terrifying question of just how much worse things can get before any Republican does more than just talk about it.