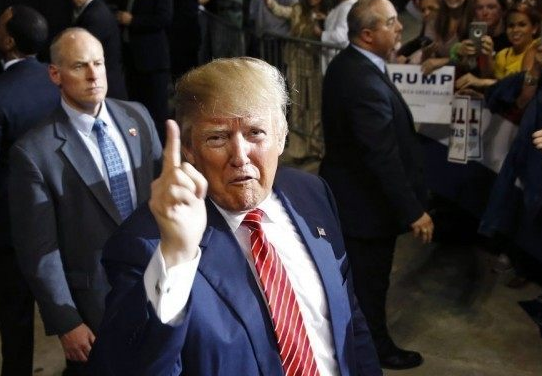 After losing the first presidential debate to Hillary Clinton, Donald Trump apparently grabbed a female reporter's wrist and pushed her phone away. That reporter is Alexi McCammond of Bustle, who has published the details of her disturbing encounter with Trump.

This behavior is reminiscent of Trump's campaign manager, Corey Lewandowski, grabbing a female reporter by the arm during the primaries.

When @realDonaldTrump grabs my wrist, tells me to "put that down" and pushes my phone away #Debates2016 pic.twitter.com/0puNWFfhwC

That's as he's ignoring my question re: how he responds to women who are nervous to vote for him #Debates2016 https://t.co/Uggk6mdsLE

McCammond elaborates on her encounter with Trump:

I asked, "How would you respond to young women who are nervous about voting for you?" This question was inspired by the countless students I spoke to earlier that day who told me they were nervous about the future of women's rights if Trump were elected. My phone was out and already recording in anticipation of the answer Trump would hopefully give me to my question. Instead, another reporter behind me yelled a question to him (something about what he'd say to the people of Westchester, New York). He then looked at me, grabbed my right wrist (which was the hand holding the phone), said, "Put that down" and pushed my hand down.

Incredibly, this story has yet to receive coverage in corporate news outlets. For the millionth time: What would happen if Hillary Clinton had done the same thing?