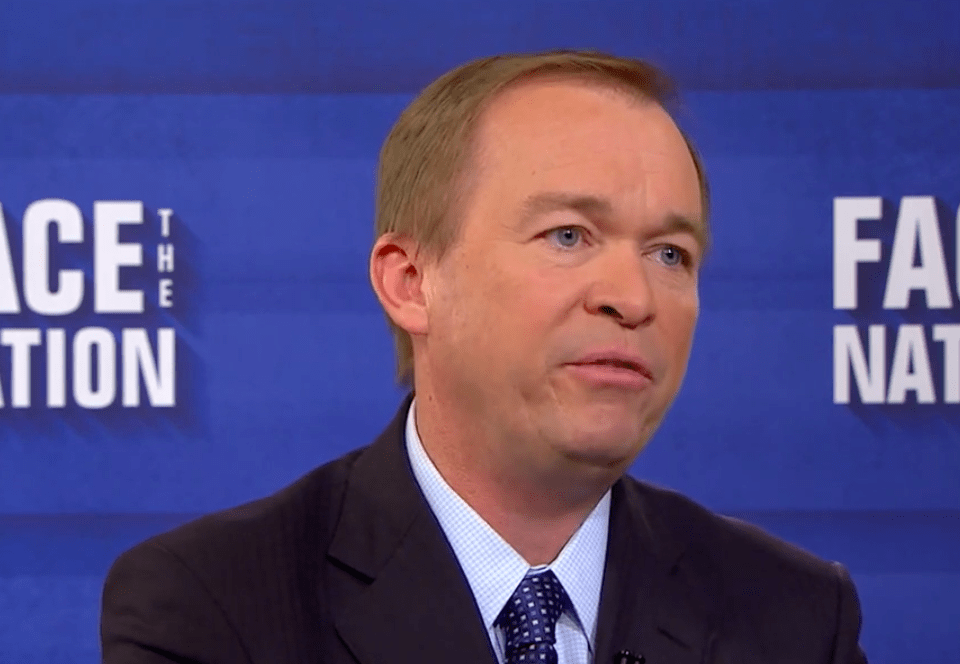 Office of Management and Budget (OMB) Director Mick Mulvaney doubled down on Donald Trump's assertion that "Our country needs a good 'shutdown' in September," telling CBS News' John Dickerson that a "good shutdown" would help "drain the swamp" in Washington, DC.

Donald Trump began the week by insisting that "Our country needs a good 'shutdown' in September." And Office of Management and Budget (OMB) Director Mick Mulvaney finished the week by doubling down on that reckless statement.

In an interview on CBS News' Face the Nation, host John Dickerson asked Mulvaney about Trump's tweet, and despite appearing to indicate that Trump's declaration had been an unwelcome surprise, Mulvaney still defended it.

He noted that he heard about the tweet just before his press briefing on the budget deal, but still insisted that a "good shutdown" would help "drain the swamp" that Trump has been flooding since he took office. He even declared that allowing a shutdown of the federal government is a way to "think outside the box."

MULVANEY: Yeah, I saw that tweet. In fact, I saw that tweet about two minutes before I walked in to do the press reports on the 2017 funding bill. But here is what I think it is: I think the president is frustrated with the process in Washington. It is broken. What we just did this week was fine and passable, but not ideal. The appropriations, the spending process, Congress using the power of the purse, has been broken here in Washington for more than ten years, and I think a good shutdown would be one that can help fix that, as part of that overall drain the swamp mentality about Washington, D.C. This president is willing to think outside of the box and do things differently around here in order to change Washington. And if that comes to a shutdown in September, so be it.

Perhaps the most disturbing aspect of Mulvaney's response is its apparent continuation of the Trump administration's contempt for separation of powers, and Trump's related lust for more power. Mulvaney clearly states that Trump is frustrated with Congress' very existence as a check on executive power, and sees a shutdown as a way to leverage power for himself. Not only is this frightening and foolish, it is also incredibly destructive.

The last government shutdown was incredibly harmful to Americans, including military veterans and their families, and cost $24 billion to the economy. And as we have noted repeatedly, Trump's promise to "drain the swamp" isn't just broken — it is now a punchline for an administration that has done the opposite. A government shutdown will only drain the wallets of everyday Americans, and all in service to a border wall that nobody wants to pay for, and funding cuts to Planed Parenthood that 80 percent of Americans oppose.

A shutdown would be disastrous for Republicans politically, but it will be even more harmful to the Americans this government is supposed to serve.