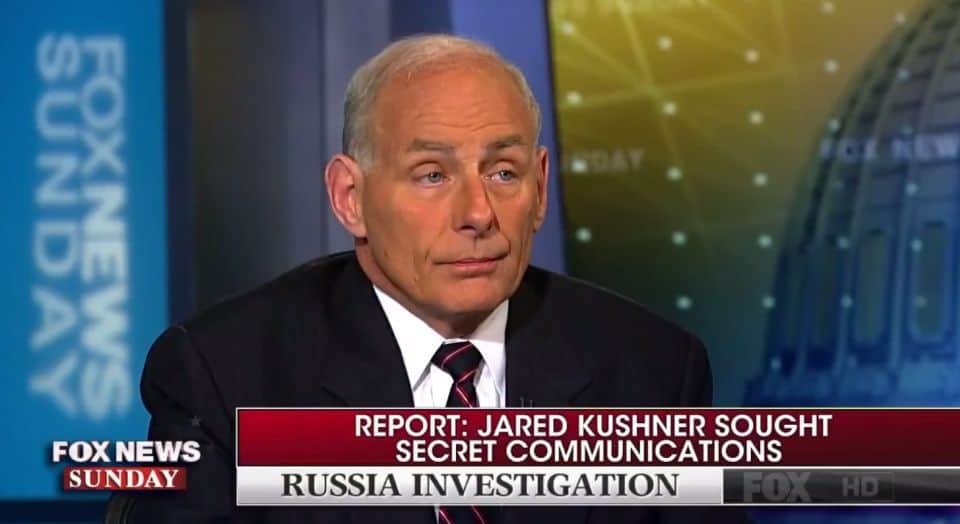 John Kelly, the Secretary of Homeland Security, praised Jared Kushner's reported desire for a secret back channel with the Russian government as a "good thing" in an interview with Fox News Sunday, visibly surprising host Chris Wallace.

Kushner, Donald Trump's senior adviser and son-in-law, discussed the possibility of setting up a private communications back channel with the Kremlin during the transition period. While some have described Kushner's alleged behavior as "espionage," the man responsible for America's national security minimized the seriousness of this behavior.

Kelly said the idea of such a channel "doesn't bother me," telling Wallace, "I don't see the big deal."

Wallace, clearly taken aback, asked, "You say you don't see a big deal?" Kelly confirmed his position, then invoked the idea that Russia would be communicating with the White House. Wallace had to challenge him again, pointing out that the Trump transition was operated in a private capacity, not via the White House, and was a challenge to the work of the Obama White House.

WALLACE:  Before we get to terror, let me ask you about the hot story in Washington now. These revelations about Jared Kushner trying to set up some kind of back channel to the Kremlin through the Soviet — the Russian ambassador. Your reaction to that, is there anything improper with that?

KELLY: Well, I don't know if it's true or not, I know it's being reported in the press.

WALLACE: It has been confirmed to me the conversation took place.

KELLY: I would just tell you, Chris, that I think any channel of communications, back or otherwise, with a country like Russia is a good thing. I mean, multiple ways to communicate back and forth is a good thing with any country, I think, and particularly a country like Russia, so it doesn't bother me. I mean, you just have to assume, obviously, that what you are getting is — may or may not be true, they may be working you, but that's the whole point. I mean, that communication then goes into the White House as a data point in terms of discussion. So, I don't see a big deal.

WALLACE: Let me — you say you don't see a big deal?

KELLY: No, I think any time you have channels of communication with a country, particularly one like Russia, I wouldn't criticize it.

WALLACE: But you talked about a data point into the White House. This was during a transition, these were private officials. We have one president at a time — does that make a difference?

KELLY: You know, I mean, obviously during the transition period, the people in transition, the incoming Trump administration is not in a position to do anything to inhibit what the Obama administration literally days before they transitioned out — so again, as they begin to build relationships, there's nothing wrong with that. As they begin to build their own situational awareness with Russia in this case, I don't see an issue here.

Once again, a figure with a previously distinguished background has shown that, once inside the Trump orbit, they are willing to throw it all away to please the administration.

A communications channel between the Trump team and the Russian government — a government which interfered in our election to benefit Trump — is an incredibly serious and dangerous possibility, even if were only talked about.

And for the Homeland Security chief of the United States to so blithely dismiss it is a dereliction of his sworn duty.