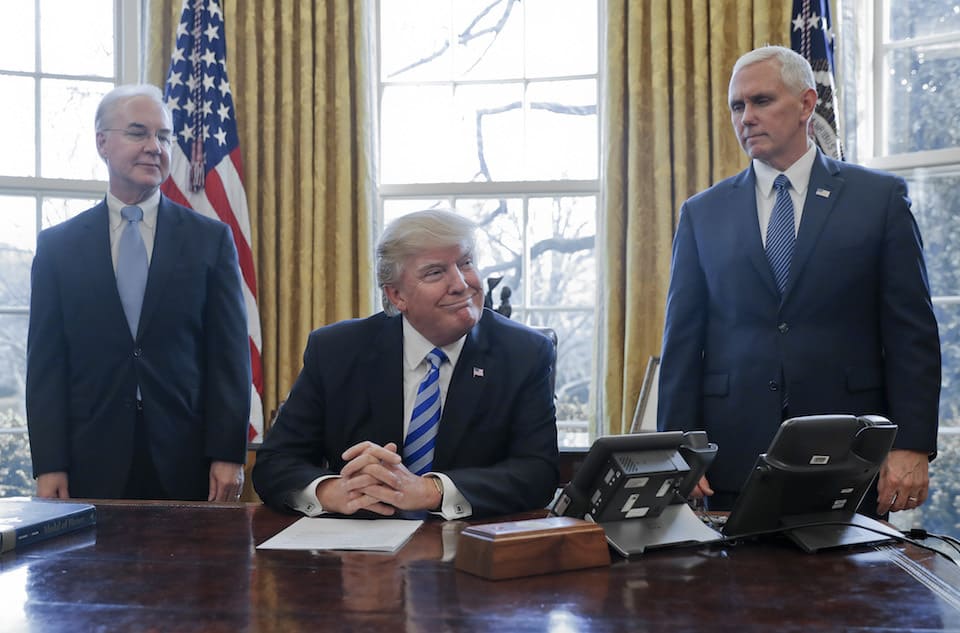 Republicans have locked out women from the secret health care bill they are writing, and the Trump administration doesn't care.

The way Senate Republicans are trying to push through their super secret bill to repeal health care is egregious for a number of reasons.

But their exclusion of women from the process is especially odious. The Senate version of the bill is being written in secret, by a group of 13 Republican men and no women. Even female senators from their own party have no voice in crafting the bill.

And that, according to Health and Human Services Secretary Tom Price, is just fine. In an exchange with Sen. Brian Schatz (D-HI), during an appropriations hearing, Price refused to denounce that terrible decision by his fellow Republicans, absurdly claiming it is not his "role to engage in the process."

.@SecPriceMD refuses to say if women should have a seat at the table writing the Senate's secret tax-cuts-for-billionaires #TrumpCare bill. pic.twitter.com/aLKBhkmVjB

SCHATZ: You're a physician, you're the secretary, you're the former chair of the budget committee, you've worked on a bipartisan basis. So I'm just going to ask you a couple of questions related to your personal opinion around lawmaking. Do you think that that 13-person group would benefit from the perspective of a woman?

SCHATZ: You can't answer the question of whether you think a health care discussion would benefit from having a woman involved or not?

It is not a trick to question to ask whether women should have input on a health care bill that will affect millions of Americans and a sixth of the economy. Especially when male legislators are infamous for not understanding even the most basic facts about women's health care — like contraception, pregnancy, and how to screen for breast cancer.

In March, for example, Republican Rep. John Shikmus asked why men should have to pay for prenatal care, and he's hardly the first Republican to say out loud that men should be exempt from sharing the health costs of pregnancy and child birth.

In 2009, during the initial debate over Obamacare, then-Sen. Jon Kyl of Arizona infamously claimed, "I don’t need maternity care, and so requiring that to be in my insurance policy is something that I don’t need and will make the policy more expensive."

And that is precisely why it is inappropriate and absurd to exclude women from the process of writing health care legislation. It should not be difficult for the Trump administration to admit that.

Given the administration's handling of this effort to repeal Obamacare — pushing for draconian cuts to Medicaid, discrimination against people with pre-existing conditions, and kicking 23 million Americans off their insurance, all in secret — it's no wonder that a new poll shows 66 percent of Americans, including a third of Republicans, don't approve.

And the fact that the administration does not care whether women have a voice in the process only makes it look that much worse.