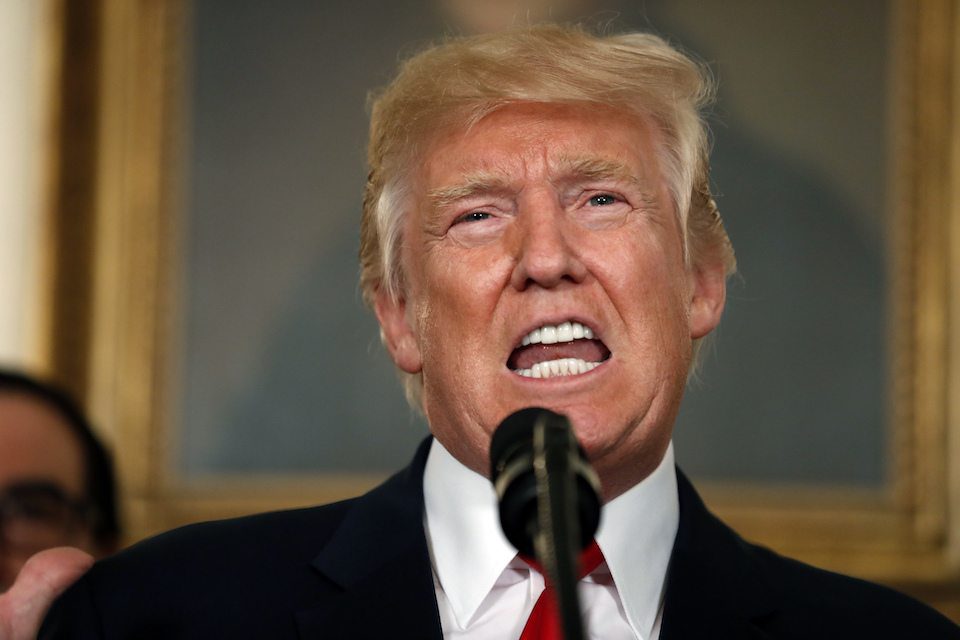 It took Donald Trump two days and global pressure to condemn Nazis. It took him mere hours to complain about being forced to do it.

First, Donald Trump blamed "many sides" for the white supremacist riot in Charlottesville, where his self-identified supporters waved the Nazi flag and chanted "Heil Trump."

When that despicable statement was universally condemned as insufficient — except by the various white supremacist and neo-Nazi groups that claimed his statement was a wink and nod of approval for their movement — the White House pretended he had specifically condemned those groups.

On Monday, Trump very belatedly spoke from the White House to declare that "racism is evil." He said "those who cause violence in its name are criminals and thugs," and he included in that group "the KKK, neo-Nazis, white supremacists." Finally.

But it did not take Trump very long to prove he didn't mean it. When a CNN reporter asked why he had not condemned those groups over the weekend, he insisted that he had. Then he reverted to a far more familiar topic of condemnation: the media. He called CNN "fake news."

And then, to make sure everyone gets his message — that it's the media that is the problem, not his tacit approval of the white supremacist and neo-Nazis groups who have been supporting him all along — he put it in writing.

Made additional remarks on Charlottesville and realize once again that the #Fake News Media will never be satisfied...truly bad people!

If there was any doubt about just how reluctant Trump was to condemn the very groups that support him, he certainly erased it with his tweet. Trump's attack on the media as "truly bad people" is far more harsh than anything he has said about the groups that gathered in Charlottesville to defend and promote white supremacy.

Trump devoted more time, and more tweets, to attacking his critics and those he considered his enemies than to the people who marched under the traitorous Confederate flag and quoted Hitler. On Monday alone, he attacked "Obstructionist Democrats" and the black CEO who dared to resign from Trump's advisory council in protest of his refusal all weekend to condemn white supremacy.

But the young white men and women who went to Charlottesville to praise Trump, Confederate leaders, and Nazis are not Trump's enemies. They celebrate him and thank him for letting them feel safe to spout their hatred in the public square, in ways they only did in the shadows before Trump and his white supremacist team came to power.

And in return, he gives them his silence, which they all interpret as permission and approval. And why shouldn't they? Even on the day Trump tepidly read words of condemnation from a teleprompter, he could not help but reveal he only did it to satisfy the media.