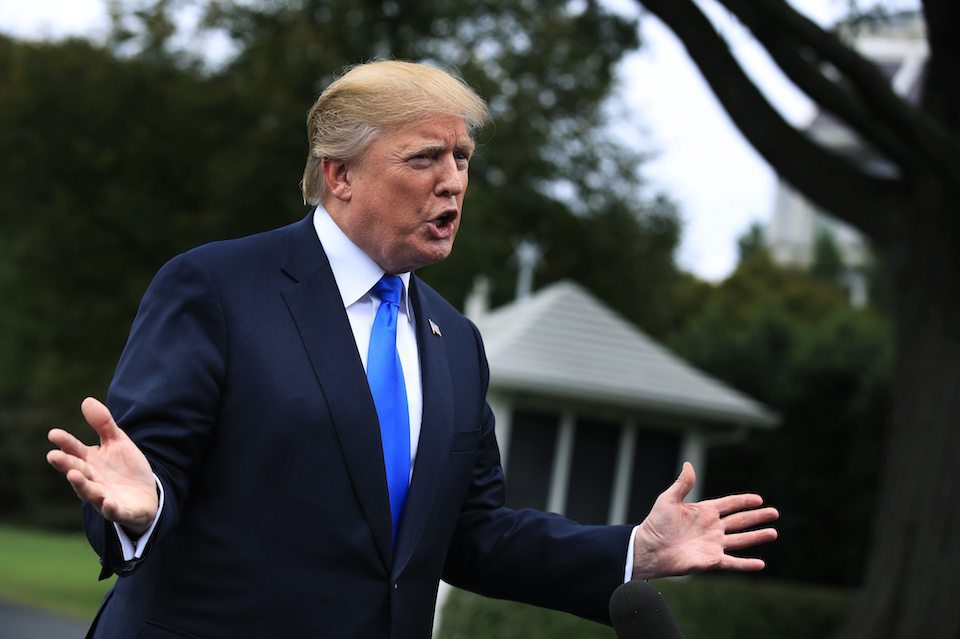 Republicans fret Trump doesn't understand what kind of fury Democrats will let loose on the White House if they gain control of Congress.

Convinced that Donald Trump has no idea the “the misery Democrats could unleash on his presidency” if they gain control of the House next year, CNN reports more and more Republicans, including Trump aides, fear impeachment proceedings if the GOP is swept out of office in 2018.

And they don’t understand why Trump is fueling resentment against his own party by tacitly supporting Steve Bannon’s self-described “war” on sitting Republican members of Congress.

The rising sense of panic comes as the Trump White House still searches for its first major legislative victory. Republicans control the White House, the Senate and the House, yet they’ve been completely impotent in terms of passing any kind of agenda. (Trump instead has been reduced to signing vindictive executive orders.)

"If we lose the House, he could get impeached. Do you think he understands that?" one top GOP donor recalled an exasperated, anonymous Republican senator complaining.

Another GOP congressional aide predicted the Democrats would make Trump's life a "living hell." CNN reports that top White House officials have openly discussed the threat of impeachment among themselves, but don’t dare to bring it up with Trump.

Last week, Democratic Rep. Al Green of Texas unveiled articles of impeachment against Trump on the House floor, but no vote was taken. One of the articles accuses Trump of "fueling an alt-right hate machine" that's causing "immediate injury to American society."

Rep. Steve Cohen (D-TN) recently told MSNBC that he’s discussed impeachment with at least one Republican member of Congress who’s thinking of introducing articles against Trump. And keep in mind, Sen. Bob Corker (R-TN) has already gone on the record suggesting an unstable Trump is leading the country toward “World War III.” That certainly confirms that at least some Republican members of Congress agree Trump is not fit for office.

Against that backdrop comes the Bannon crusade to oust Republicans. "Right now, it's a season of war against a GOP establishment," Trump’s former chief strategist proclaimed at the socially conservative Values Voter Summit over the weekend. He’s vowing to purge supposedly unfaithful members of the Republican Party through 2018 primary challenges, a move that will likely weaken the party for election run-offs next November against Democrats.

Bannon’s war against the GOP “establishment” is rather bizarre since the vast majority of Republicans in Congress have been faithfully supporting Trump in virtually every vote cast this year. The reason Trump’s agenda is dead is that he basically can’t pick up support from any Democrats. Yet much to the delight of the Democratic Party, Bannon wages war with Trump’s GOP.

Quipped one Republican official to CNN, "Won't it be ironic that Steve Bannon helped get the president elected and impeached?"