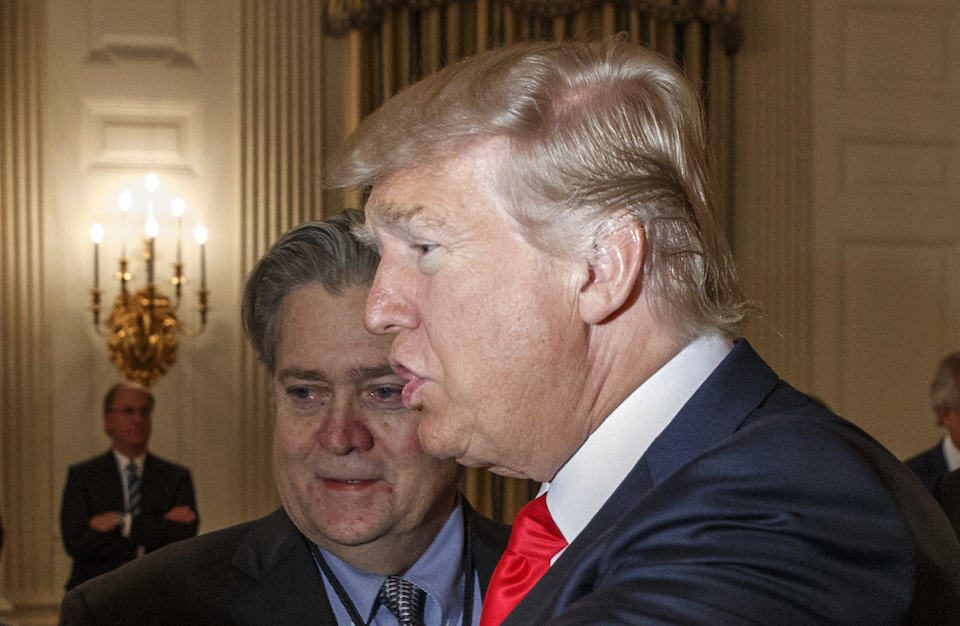 A week ago, Sebastian Gorka — adviser to the president and a member of a far-right Hungarian group of Nazi sympathizers — was supposedly on his way out of the White House. But Donald Trump and Steve Bannon stepped in to save him.

Donald Trump's taste in staff and advisers is most distasteful indeed.

His administration is overwhelmingly white and male, and filled with extremely wealthy people who have no expertise whatsoever. Steve Bannon, the self-proclaimed leader of the so-called "alt-right" white nationalist movement, is Trump's top strategist.

Now, according to the Daily Beast, the two have "personally intervened" to save the job of a Nazi sympathizer who was on his way out.

Only a week ago, senior administration officials leaked that supposed counterterrorism expert Sebastian Gorka would be leaving his position as deputy special assistant to the president. Even among the many problematic members of the Trump administration, Gorka is particularly noteworthy.

Gorka's immigration to the United States might have violated the State Department's rules against admission of members of the far-right Hungarian group known as Vitézi Rend, established by Nazi collaborators. How and why Gorka was allowed entry into the United States in the first place is unknown.

But why Trump would want a member of a Nazi-sympathizer extremist group in his White House is far more troubling. His precise role and responsibilities were "a big mystery," according to White House sources.

Which is why last week's news of Gorka's expected departure suggested that perhaps the Trump team finally understood the incredibly bad optics of a Nazi sympathizer acting as adviser to the president.

Alas, that did not last long. Despite the horrible message Gorka's mere presence sends, Gorka is protected from on high, by Bannon, with whom Gorka worked at Breitbart, and by Trump himself. The Daily Beast reports Gorka was described inside the White House as "a friend of the president," and that when rumors of Gorka's departure started, Bannon stepped in to save him:

“[Bannon] put a stop to it—he’s loyal and a friend’s job was in danger and reputation was getting dragged through the mud,” another Trump administration official said, noting that Bannon had acted “decisively” to lobby for one of his ideological and personal allies in the West Wing. Trump then privately assured Gorka that his job was safe for now.

Gorka also said that he had been personally assured by Trump that “he’s not being asked to step down.”

The decision to act as Gorka's white knights, despite the serious questions his presence raises, is highly suspicious. And it looks even worse compared to another recent staffing decision: the firing of the White House's first Black female usher, Angella Reid, who was hired by President Barack Obama.

Trump has been lashing out at various high-ranking members of the Obama administration, so the dismissal of Reid is odd, though perhaps not entirely surprising. But in light of the moves to save Gorka's position in the White House, it draws a dark and ugly picture of the priorities of Trump and his closest advisers.