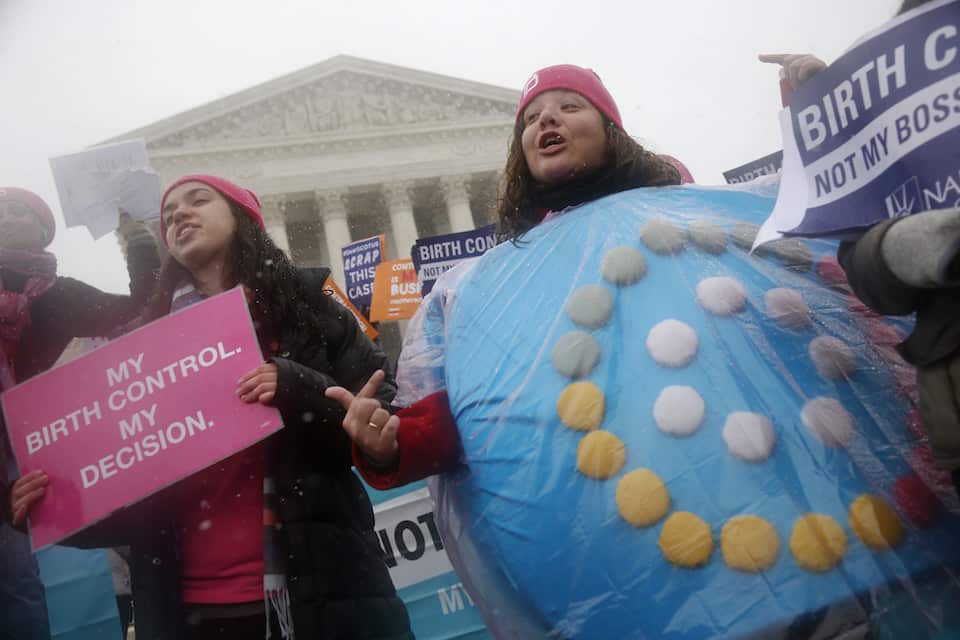 The modern Republican Party has made it quite clear for years that they were not content to limit their attacks on reproductive rights to just abortion. And now with one of their own in the White House, they are gearing up to go after birth control yet again, harming millions of Americans under the flimsy guise of protecting religious liberty.

The Trump administration's pattern of hostility toward reproductive justice and the right to bodily autonomy for millions of Americans continues to ramp up, as the White House seemingly plans to roll back a federal requirement insurance companies cover contraception without copays.

According to Vox, which obtained a draft of the regulation, it would allow "any employer to seek a moral or religious exemption from the requirement."

Under President Barack Obama, the Affordable Care Act required nearly all insurers to cover the full range of birth control methods approved by the U.S. Food and Drug Administration. While the Obama administration included exemptions for religious organizations, several objected and sued on the grounds that even having to complete a form stating their religious objections was overly burdensome.

Notably, non-religious corporations, such as the arts and crafts store Hobby Lobby, also sued — and prevailed — on the grounds that providing insurance that complied with federal rules was a violation of their religious liberty.

And now, the Trump White House is riding to their rescue, potentially offering up a harmful solution to a made-up problem.

The Office of Management and Budget is reviewing an "interim final rule" troublingly titled "Coverage of Certain Preventive Services Under the Affordable Care Act." Based on Trump's recent executive order protecting "religious liberty" and claiming to "address conscience-based objections to the preventive-care mandate," it is not difficult to discern the meaning of the OMB's language.

And it is also not hard to envision the untold damage this move would do to so many people around the country.

For low-income individuals, particularly those with children to care for, the dramatic increase in those who were able to obtain birth control with no out-of-pocket cost thanks to Obamacare — from 15 percent to 67 percent in the roughly year and a half after the contraception coverage mandate took effect — was surely a lifesaver in many ways.

And today, as Planned Parenthood notes, "More than 55 million women nationwide have benefited from no-copay birth control, and in the first year of the birth control benefit it saved women an estimated $1.4 billion in out-of-pocket costs for birth control pills."

Add to those numbers the transgender and non-binary people who also need access to reliable reproductive health care, and the picture only gets bleaker, and the need to defend these rights more urgent.

Having control over one's reproductive health, and specifically over whether or not to become pregnant, is a crucial civil and economic rights issue. As Planned Parenthood's president, Cecile Richards, noted in an article for the New England Journal of Medicine:

Since it became legal in the United States a half-century ago, birth control has provided enormous benefits to women and their families — indeed, it has been nothing short of revolutionary for women and society. ... Birth control has dramatically improved the ability of all women to participate actively and with dignity in the U.S. economy. And researchers have attributed the historic 40-year low in the teen pregnancy rate to the increase in access, especially to highly effective methods of birth control.

Indeed, one-third of the wage gains that American women have achieved in the past half-century are due to the availability and accessibility of safe and reliable birth control. Contraception access has also led to increased rates of enrolling in and graduating from college, pursuing advanced degrees, running and owning business, and raising healthy families.

If the Republican Party truly cared about "family values" — for all families — it would seem prudent to support something that makes families stronger, happier, and less likely to suffer from poverty or ill health.

Instead, Republicans are still touting their absurd excuses for not covering birth control, like insisting one can meet all contraception needs at the grocery store or dismissing the aforementioned cost concerns as essentially fictional.

But as infuriating as those statements are, they are of a piece with the White House's increasing and widespread antagonism to reproductive health care in general, as well as the still-roiling attempts to repeal Obamacare as a whole. Trump even appointed Charmaine Yoest, an anti-women's health extremist who opposes birth control, to serve in the Department of Health and Human Services

In a statement, House Democratic Leader Nancy Pelosi called out Trump's "sickening" plan to roll back contraception access. And she had words for her Republican colleagues as well:

Unfortunately, instead of standing up to the President, House Republicans are waging their own war on women with their disastrous Trumpcare bill, numerous restrictions on how women can spend private dollars in purchasing health insurance and cuts to access to the Title X family planning program.

And NARAL Pro-Choice America made the crucial observation in its statement that the method by which this rule is being rolled out is "silencing" those who would object, nothing that "because interim final rules go into effect immediately rather than at the end of a comment period, there will be no chance for Americans to weigh in on this potentially devastating plan."

As Kevin Griffis, vice president for communications at Planned Parenthood Federation of America, noted in a statement, "The idea that this administration wants a woman's boss to decide whether or not she can access birth control is abhorrent."

Easy access to affordable, reliable contraception is a human right, and reproductive health care is just that: health care. It should not be in the hands of one's boss, because of their differing religious viewpoint; one's representative in Congress; or indeed, a large and yet still absurdly homogeneous group of Congressmen, who themselves have never and will never need to use birth control.

Organizations like the National Women's Law Center are already preparing lawsuits against the Trump administration's expected rule, and Democrats in Congress, such as Sen. Patty Murray of Washington, will not go along with this incursion quietly.

The White House may try to come for your birth control under cover of night, but they're sure to find themselves in the spotlight if they do.